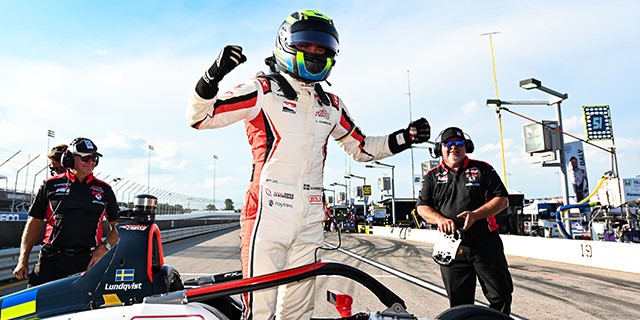 Linus Lundqvist’s car bobbled in the first turn of his two-lap qualifying run Friday afternoon at World Wide Technology Raceway, yet he still managed to win his sixth pole position of the 2022 Indy Lights Presented by Cooper Tires season.

It’s been that kind of a year for the Swedish driver.

This was the second straight and seventh overall top starting spot this season for Lundqvist, who was awarded the No. 1 grid position based on entrant points for the previous race earlier this month at Nashville after qualifying was rained out. He won five consecutive poles on track earlier this season.

“We were good in the test here a couple of days ago,” Lundqvist said. “We just improved little by little. We knew that qualifying was going to be super tight.

“I knew that I was going to have to push to the limit and maybe a little bit beyond because I remember qualifying here last year, I was under the limit. So, I thought I’m going to have to change that up. It was a close call in (Turn) 1, but we managed to string it together with a good second lap. Super happy.”

Lundqvist will aim to extend his series lead for victories with his sixth win of 2022 during the 75-lap race Saturday afternoon on the 1.25-mile oval. Peacock Premium, INDYCAR Live! and the INDYCAR Radio Network will provide live coverage at 4:15 p.m. ET.

Benjamin Pedersen ensured a front-row lockout by HMD Motorsports by qualifying second at 160.124 in the No. 24 Global Racing Group with HMD car. Pedersen led practice earlier Friday at 160.662 and also led both sessions of an Indy Lights test Aug. 12 at WWTR.