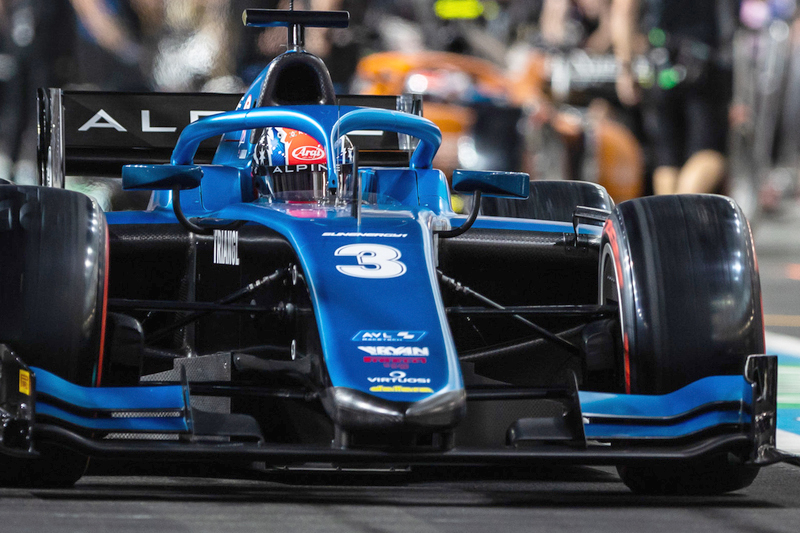 Jack Doohan picked up from where he left off just under a week ago, leading the way in P1 for Virtuosi Racing. The Australian was fastest in the opening session of the Formula 2 weekend ahead of Ayumu Iwasa by 0.323s, while Championship leader Felipe Drugovich followed in third, 0.402s down on the best time.

The opening minutes were taken up by installation laps around what was quite a green track. Before any real representative times could be posted, David Beckmann spun into the gravel out of Turn 13 to bring out the red flags. The Van Amersfoort Racing driver managed to wriggle out of the gravel trap in reverse and return to the pits under his own steam.

After a quick clean up job, the session was back underway with 28 minutes remaining, but nobody was too eager to get immediately back out on track. Once things did get going, it was Jack Doohan that set the pace. The Virtuosi Racing driver set a 1:24.268, just 0.029s clear of Roy Nissany in P2.

As the drivers logged the laps, the track conditions rapidly evolved, and the times tumbled as a result. Amaury Cordeel was briefly quickest before Ayumu Iwasa, then Frederik Vesti went fastest. Doohan restored himself back to P1 with a 1:23.133 with just under 20 minutes left.

The track evolution enticed the drivers to push but for Vesti, it resulted in a spin and contact with the barriers. His stranded ART Grand Prix car at Turn 2 brought out the red flags once more.

The session went back to green with 10 minutes left and this time everyone was keen to get the laps in. Major improvements were few and far between until the final five minutes. Iwasa moved himself up to P2 while Drugovich and Lawson jumped up to third and fourth respectively.

Dennis Hauger put PREMA Racing into the top five while simultaneously, teammate Jehan Daruvala was exploring the gravel after running deep at Turn 1. The Indian driver was able to keep going and avoid a third red flag of the session.

Doohan was untroubled out in front, ending comfortably quickest for Virtuosi on a 1:22.967. He was followed by Iwasa and Drugovich while Lawson and Hauger rounded out the top five. Vesti ended up sixth despite his shunt, while Logan Sargeant, Amaury Cordeel, Théo Pourchaire and Richard Verschoor completed the top 10.

F2 Qualifying is set to get underway at 15:00 local time.