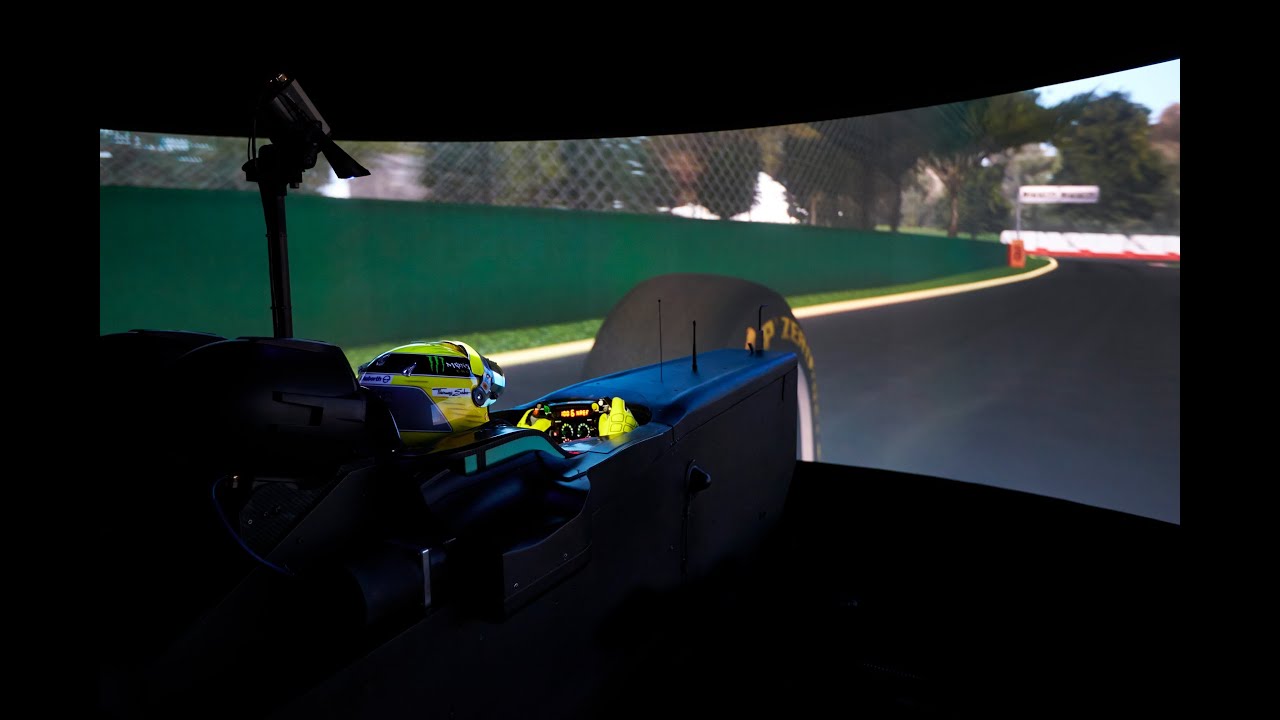 Ahead of the Italian GP, Mercedes F1 is putting their F1 simulator drivers in the spotlight in our latest preview feature. The video talks about the role of a sim driver and their importance, featuring interviews with Anthony Davidson and Frederik Vesti (both Simulator Drivers for the Team) and Russell Paddon (Performance and Simulation Engineer).

With limited track time in Formula One, simulation tools are becoming increasingly important for setting up and developing a car. Therefore, the role of a Simulator Driver is more crucial than ever before.

What is a simulator driver?

Our Driver-in-Loop (DiL) simulator is a state-of-the-art facility located at our factory in Brackley, using sophisticated lidar-scanned, 3D track maps and detailed virtual models of the car.

Computer simulations utilize these virtual models and pair them with a “virtual driver” to complete thousands of computer laps. In the DiL, the “virtual driver” is replaced by a real one, and it’s their job to complete running on our sophisticated F1 rig – which replicates the layout of a real F1 chassis and cockpit – and provide feedback to the engineers.

The role of a simulator driver spans before, during and after a Formula One race weekend, working with the two race drivers and a group of engineers to understand set-up changes, the feel of the car and improve our understanding of it.

We have an exciting roster of simulator drivers in our Team who all use their different experience levels and motorsport backgrounds, to contribute to making our car faster on the track.

These include long-time simulator drivers in Brackley such as Anthony Davidson, to fresher faces such as our Junior Driver, Frederik Vesti and Charlie Eastwood. Tom Gamble, Jake Hughes and Ben Barnicoat are also frequently in our simulator.

What does a race week look like for a simulator driver?

Testing in the simulator takes place five days a week, and a typical day in the sim can see a driver log up to 170 laps, working through a range of different set-up tweaks and changes during this time.

The aim of the pre-event work is to establish a good baseline set-up of the car, which the drivers can then build from on Friday during the practice sessions. Finding a realistic balance between understeer and oversteer, and getting an initial feel for how the car behaves under braking and in the traction zones.

During the race weekend, the sim drivers will then watch and observe the first and second practice sessions. During FP2, the fastest lap time from the race drivers will be taken and the sim team will try and correlate their car the best they can, so the sim driver can jump in the rig and drive the car exactly how they were, taking the same lines and trying to match the data the best they can.

From there, it’s all about throwing different set-up options at the car, in the hunt for more performance. The loop will then be closed with the correlation of the track data, so the potential changes can be analyzed and fed back to the trackside team.

More often than not, the findings from the Friday support role are brought to the car and help improve performance on track. These sessions take place whatever timezone the trackside team are on, so sometimes the sim crew are working throughout the night in the UK to deliver feedback.

After the event, sim running will take place to fine tune the correlation and review the race weekend, understanding if any opportunities had been missed which could have improved car performance.

Why is the simulator running so important?

Formula One teams used to have much more freedom and flexibility with running their cars on track, but over the years, these opportunities have decreased. Now, there are very few chances for teams to hit the track with their current-spec car, outside of race weekends.

But in the simulation world, opportunities are almost limitless. And parts can be tried on the car before they are even produced or manufactured, which is incredibly useful to determine whether they deliver performance to the car and are worth making.

With the new regulations that were brought in for 2022, there’s been so much more to discover about the car because they behave so differently to their predecessors. And with little track time to gather data, simulation tools such as the DiL are hugely important.

Having simulator drivers completing hundreds of laps each week is a massive help in understanding a car’s issues and working on solutions that can be trusted.

How close to reality is an F1 simulator for the drivers?

As the software and hardware of F1 simulators evolves, it gets closer and closer to the real thing. Which makes them all the more useful. If it can be driven more like a real car and can feel more like a real car, the feedback will be more accurate and therefore more performance can be found.

Modern F1 simulators feature real chassis, pedals, steering wheels and the drivers will often be kitted up in race suits, gloves and helmets to get as close to reality as they can. The sim hardware simulates the movements of an F1 car with impressive realism, so the drivers feel every bump, snap of oversteer or curb.

Anthony Davidson has been driving in the F1 simulator in Brackley for over a decade. “I am always amazed by how close the data can match the real car and that didn’t really used to happen, whereas today it feels more like a real car,” he says, on how realistic modern F1 simulators are.

“The way the car behaves, the way that not just the hardware of the sim itself behaves but the software, and I say both of those have been an equal rate of development. I have seen the simulation and computational power just go off the chart and I can’t imagine where it will be in another 20, 30 years. It never stops.”

Jarno will be joined again by the Spaniard Dani Moreno, F1 Esports ‘Rookie of the Year’ in 2020, who scored his first win in the Pro Series at Zandvoort in 2021 on the way to finishing P4 in the drivers’ rankings and contributing valuable points to the team championship victory. Jake Benham will complete the trio, gaining his first taste of the Pro Series after excelling in the 2022 Pro Exhibition feeder series.

Fresh from the Team’s latest victory at the V10R League Grand Final in Abu Dhabi in July, Jarno Opmeer commented: “I can’t wait to get started in this year’s Pro Series, alongside Dani and Jake, and we’ll be out to defend our titles against some very strong opposition. Preparations for the tournament are well underway and we are practising very hard for when the lights go out around Bahrain on 14th September”.

The Mercedes-AMG PETRONAS Esports Team will be competing across a number of other formats and series over the coming months, assembling a strong squad which includes Bono Huis, a key pillar of the team since 2020. Bono has won a total of five Formula Sim Racing titles, as well as becoming the Formula E 2017 Vegas eRace Champion, Formula Pro 2021 Champion and, most recently, steered the Team to victory in the 2022 V10 R-League, alongside Jarno.

“We are excited to be challenging on so many different fronts and the standard across sim racing has never been higher, which is a great motivation for everyone in the team”, said Bono Huis. We’ve been working hard behind-the-scenes to make sure we’re as prepared as we can be for the upcoming series and the new faces in our team are bringing their own experiences to make us even stronger.”

James Baldwin, winner of the 2019 ‘World’s Fastest Gamer’ competition is one of those new faces, an exciting driver equally at home racing in the virtual or real world. James is a British GT race winner in the real world and former British GT Esports Champion and Le Mans Esports World Champion in the virtual.

On joining the Team, James Baldwin commented, “I feel very privileged to be part of this team, the infrastructure and support we have to perform is incredible and I’ll be giving it my all to bring more titles back to Brackley. There’s a great mix of skills and experience across different formats in the real and virtual racing worlds amongst the team’s drivers and together, it’s a very strong group.”

Completing the Mercedes-AMG PETRONAS Esports driver line-up is Graham Carroll, a former Scottish Karting and Formula Ford 1600 Champion before switching to Esports, becoming iRacing Pro series Champion in 2015. Graham joins from Red Bull Racing Esports where he competed in the V10 R League, as well as achieving a top-three finish in the Porsche GB iRacing championship in each of the 2021 and 2022 seasons.

Oliver MacFarlane, Head of Esports, Mercedes-AMG PETRONAS F1 Team, said: “I couldn’t be happier with the driver line-up we’ve assembled to fight for championships across multiple fronts over the coming months and years. Our roster brings together youthful exuberance, championship-winning know-how, as well as a deep commitment to high-performance and operational excellence. Esports is experiencing phenomenal growth in engagement and our six drivers, supported by a world-class team of engineers, will keep us challenging for titles throughout this exciting era of sim racing.”