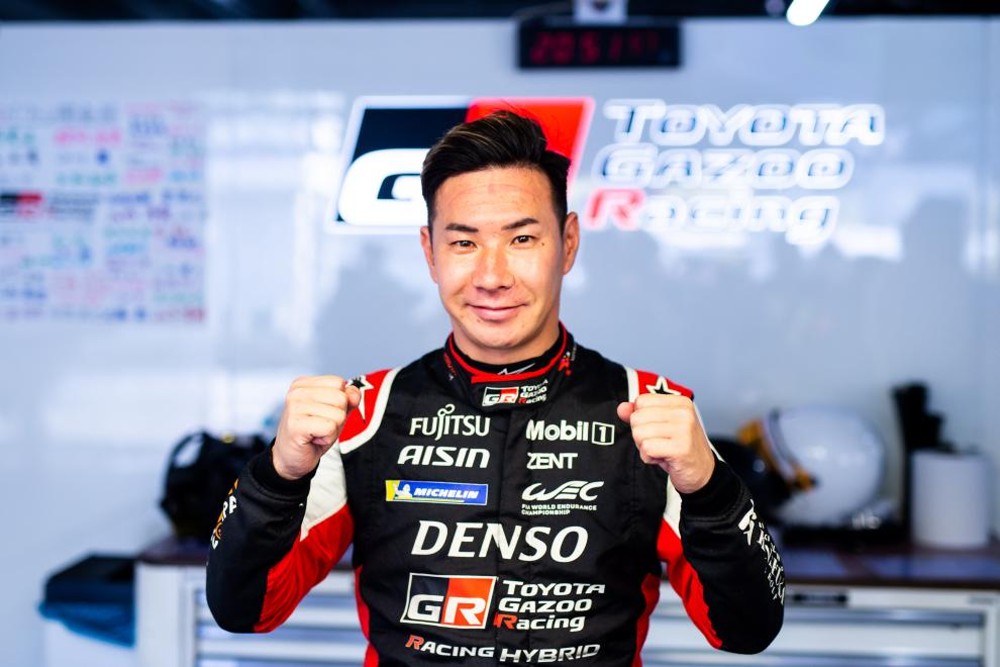 Kamui Kobayashi took a hugely popular pole position for Toyota this afternoon ahead of tomorrow’s WEC 6 Hours of Fuji.

In so doing, Kobayashi ensured the first ever Hypercar pole in Japan was achieved by the home favorites – Toyota Gazoo Racing. Tomorrow’s race will also be the first time that a No.7 Toyota has started from pole at Fuji Speedway.

That lap sealed the No.7 cars’ first top spot of the 2022 WEC season and earned Kobayashi and teammate Jose-Maria Lopez and Mike Conway the pole point.

The Alpine ELF Team took third place on the grid as Matthieu Vaxiviere peaked on a 1m29.466s lap and got within 0.2s of the Toyotas. This was much improved pace from the free practice sessions for the Hypercar points leaders who are aiming to protect their 10-pont title advantage this weekend.

Peugeot TotalEnergies will start their second ever WEC race from fourth and fifth position. Jean-Eric Vergne qualified the No.93 Peugeot 9X8 and set a best lap of 1m30.00, while Loic Duval achieved a 1m30.152s lap as the French manufacturer continues to gather miles and data on the striking new Hypercar.

The LMGTE Pro saw the anticipated close battle between Porsche and Ferrari as the two endurance racing titans re-ignited their fierce rivalry.

The initial battle was won by Porsche as Michael Christensen claimed pole in the No.92 Porsche 911 RSR-19 by setting the ultimate pace on a 1m36.371s lap.

It was the first pole for the No.92 car since opening race of the season at Sebring in March with Christensen able to lap 0.195s quicker than the No.51 AF Corse entered Ferrari 488 GTE EVO.

Christensen’s pole effort means that both of Porsches entries are now one point off the title lead in one of WEC’s tightest ever championship battles.

The reigning LMGTE Pro champion and 2022 points leader, James Calado, was just unable to better Christensen’s best lap but the Porsche and Ferrari battle is set to be as close as ever in tomorrow’s six-hour race.

Heading the second row of the grid will be the No.91 Porsche 911 RSR-19. Gimmi Bruni qualified the car but had one of his laps deleted for track limits violation.

Miguel Molina qualified the No.52 AF Corse Ferrari fourth ahead of Nick Tandy in the Corvette Racing entered C8.R.

Antonio Felix da Costa ruled supreme in the LMP2 category as he delivered the No.38 JOTA cars first pole position of the season.

The points leading trio of da Costa, Roberto Gonzalez and Will Stevens saw their points lead extended to 20-points thanks to the rapid 1m31.649s set by da Costa at the start of the 10-minute qualifying session.

Robin Frijns in the No.41 WRT car looked set to be da Costa’s biggest threat for pole but he eventually dropped back to fourth as first Nicklas Nielsen in the No.83 AF Corse LMP2 and then Ferdinand Habsburg in the Realteam by WRT entry took second and third.

Frijns was initially third but lost his time of 1m32.059s for a track limit violation.

In the LMGTE am category Ben Keating took his 2022 hat-trick of poles for TF Sport, adding Fuji to Sebring and Spa top spots in the blue Aston Martin he shares with Henrique Chaves and Marco Sorenson.

Keating lost his first timed lap after running wide but then banged in two exceptional lap to just take the pole by the tiny margin of 0.082s.

Behind the Iron Dames Ferrari came the No.71 Spirit of Race run 488 GTE EVO driven by Franck Dezoteux. The French gentleman driver was aiming for a crack at pole but spun his car spectacularly on his final push lap.