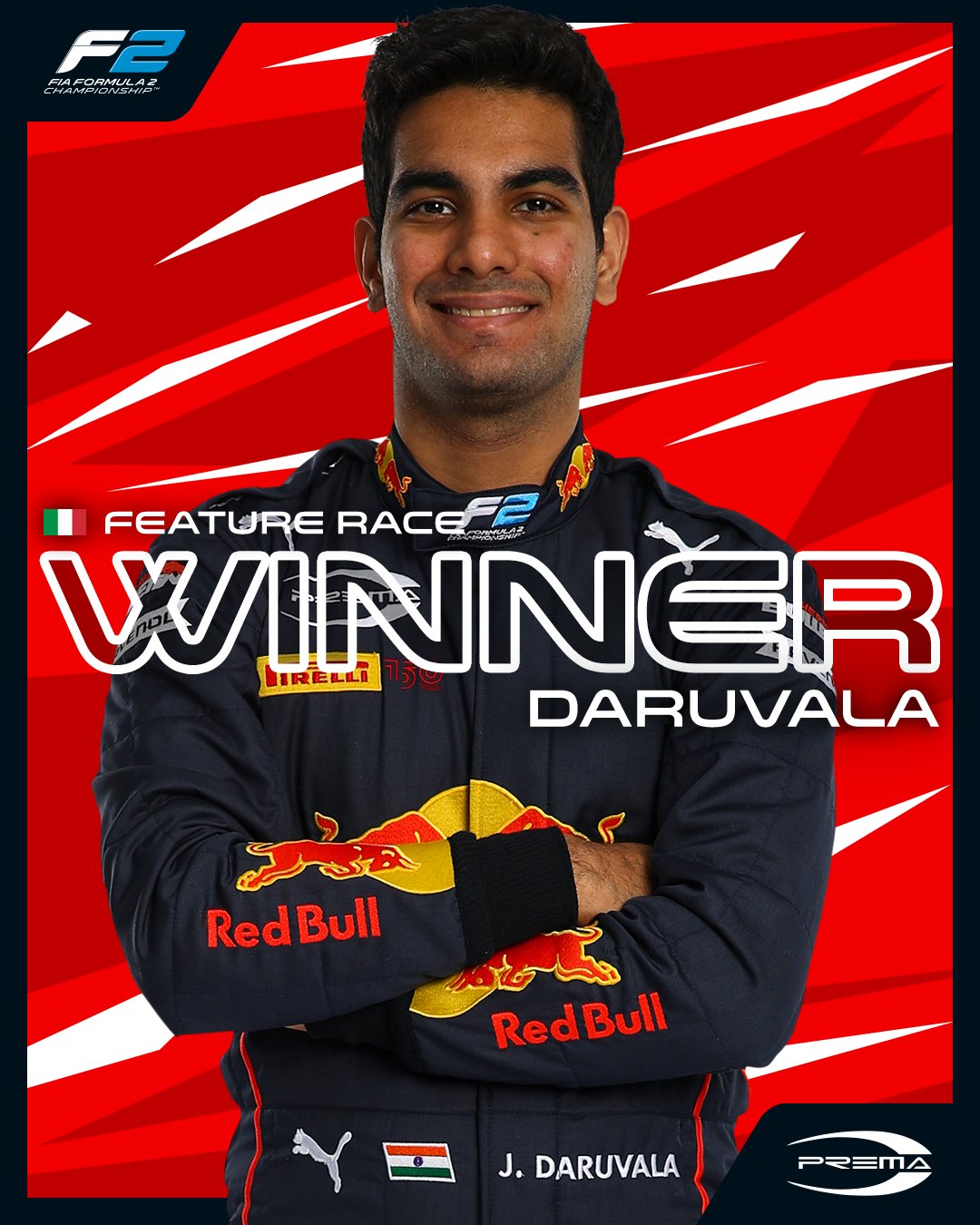 Jehan Daruvala put together a masterclass in calm and collected racing to take his first victory of the season at PREMA Racing’s home weekend in Monza. Whilst his rivals struggled under pressure, the Indian driver kept his nose clean to go from sixth all the way to the win at the checkered flag.

In a race that was as much about endurance and survival as outright speed, Frederik Vesti navigated his way through the chaos around him to secure back-to-back podiums ahead of Ayumu Iwasa.

Enzo Fittipaldi put on another fightback through the order to go from 15th to fourth ahead of Dennis Hauger, who recovered in style from a drive-through-penalty for failing to have his tires fitted by the three-minute warning before the formation lap.

David Beckmann held on to bring home a double points finish for Van Amersfoort Racing, finishing in front of the Champion Felipe Drugovich and his teammate Amaury Cordeel. Clément Novalak added two points to his tally in ninth, as Richard Verschoor had to settle for 10th, having led up until the final couple of laps.

Difficulties getting off the line for pole-sitter Jack Doohan on the formation lap repeated itself at lights out, as the Virtuosi Racing driver got bogged down and dropped to eighth allowing Liam Lawson to assume the race lead into the opening chicane. The Australian rookie’s day then went from bad to worse heading into Turn 4. He made contact with Daruvala, sending his car straight into the side of Logan Sargeant to his left. Whilst the PREMA driver managed to survive, both Doohan and Sargeant’s days were brought to an early end.

They weren’t the only ones to suffer an opening lap retirement. Into the opening chicane, Ralph Boschung was forced to go across the run-off area. Heading back on to the track, the Campos Racing driver clipped Théo Pourchaire and sent the pair into a spin, tangling with the second Campos of Olli Caldwell and Luca Ghiotto along the way to bring out the Safety Car.

It was down to Lawson to get racing back underway on Lap 6 and the Carlin immediately put his foot to the floor to pull himself out of the slipstream. This left Drugovich vulnerable, and Armstrong set out to repay the favour from the opening lap to get through to second.

Plenty of drivers were taking full advantage of the restart. Iwasa’s attempt to make a move past Jüri Vips into the second chicane backfired, as the DAMS driver had to cut across the run-off and give fifth place back. Spotted an open door, an opportunistic Daruvala swiftly snuck through on his fellow Red Bull junior at the first Lesmo.

However, the resumption of action wouldn’t last for long as the Safety Car made its second appearance on Lap 8. Calan Williams became the seventh retirement of the race when the Trident driver found the barriers at Ascari whilst battling with Beckmann.

Wasting no time, soft tire runners Armstrong, Daruvala, Iwasa and Vesti dived into the pits to bolt on the medium compounds. One lap later, it was Lawson and Vips’ turn. Unusually, despite running the yellow-walled option tires, Drugovich also opted to swap out his Pirellis right before the Red Flag came out.

A short while later and the Feature Race was back underway with a rolling start on Lap 11 and Vesti set about taking fourth from Iwasa, clearing the DAMS car with relative ease into Turn 1.

Elbows were out between Vips and Lawson as the two fiercely fought over seventh. Battling their way through Turn 1, the pair went side-by-side into Turn 4. Their duel soon ended in disaster as Vips sent the Carlin driver spinning and down the order to P13, Lawson fell further down the order after receiving a black and orange flag for front wing damage he sustained in the spin.

Vips had more luck getting his way past Novalak on Lap 15, closing down the back straight and making the move into Turn 1 to take seventh. The Hitech driver received his own 10-second stop/go penalty for causing a collision with Lawson. Serving his penalty two laps later, he dropped well out of the points to P13.

Out front, Verschoor was the sole remaining driver yet to take his mandatory stop. The Dutchman pitted on Lap 26, feeding back out into 10th

Cordeel found himself with Drugovich close to his rear wing in the closing laps. Running wide at the second Lesmo gave the Champion the chance he needed to clear the Belgian driver into Turn 1.

Out in front, it was Daruvala who looked in control. The PREMA driver continued to keep Vesti well outside of his DRS window, despite the ART Grand Prix racer’s best efforts to close the gap. Even a radio issue with two laps to go didn’t faze him, and he cruised to victory with a 1.9s gap over the Danish driver, as Iwasa’s valiant defence was rewarded with a podium at the chequered flag.

“A win in the Feature Race in Monza, I’m really, really happy. My first win of the year, also a Feature Race. It’s been a difficult year a lot of the time, so I’m very, very happy. We have a break now and it’s a good way to finish off, a podium yesterday and a win today in the main race. I can’t be more happy, big thanks to PREMA, we’ve been struggling in the past weeks and to bounce back strong at their home race really means a lot to both of us.”

Whilst the fight for the 2022 title has already been decided in Drugovich’s favour, the battle for the Vice Champion spot is heating up. As both Pourchaire and Sargeant both failed to score, that has allowed Iwasa to close the Frenchman’s advantage up to 35 points and leapfrog Doohan for fourth in the process. The Virtuosi driver now sits in fifth, tied with Daruvala on 126 points, but the Alpine junior remains ahead on countback.

We have new leaders at the top of the Teams’ Championship. Vesti’s double podium finishes are enough for ART Grand Prix to overtake MP Motorsport for P1 on 281 points, but only by four points. Dropping back slightly, Carlin remain third, 23 points off the lead. PREMA Racing solidify their hold on fourth on 222, as Hitech Grand Prix break into the 200 club this weekend.