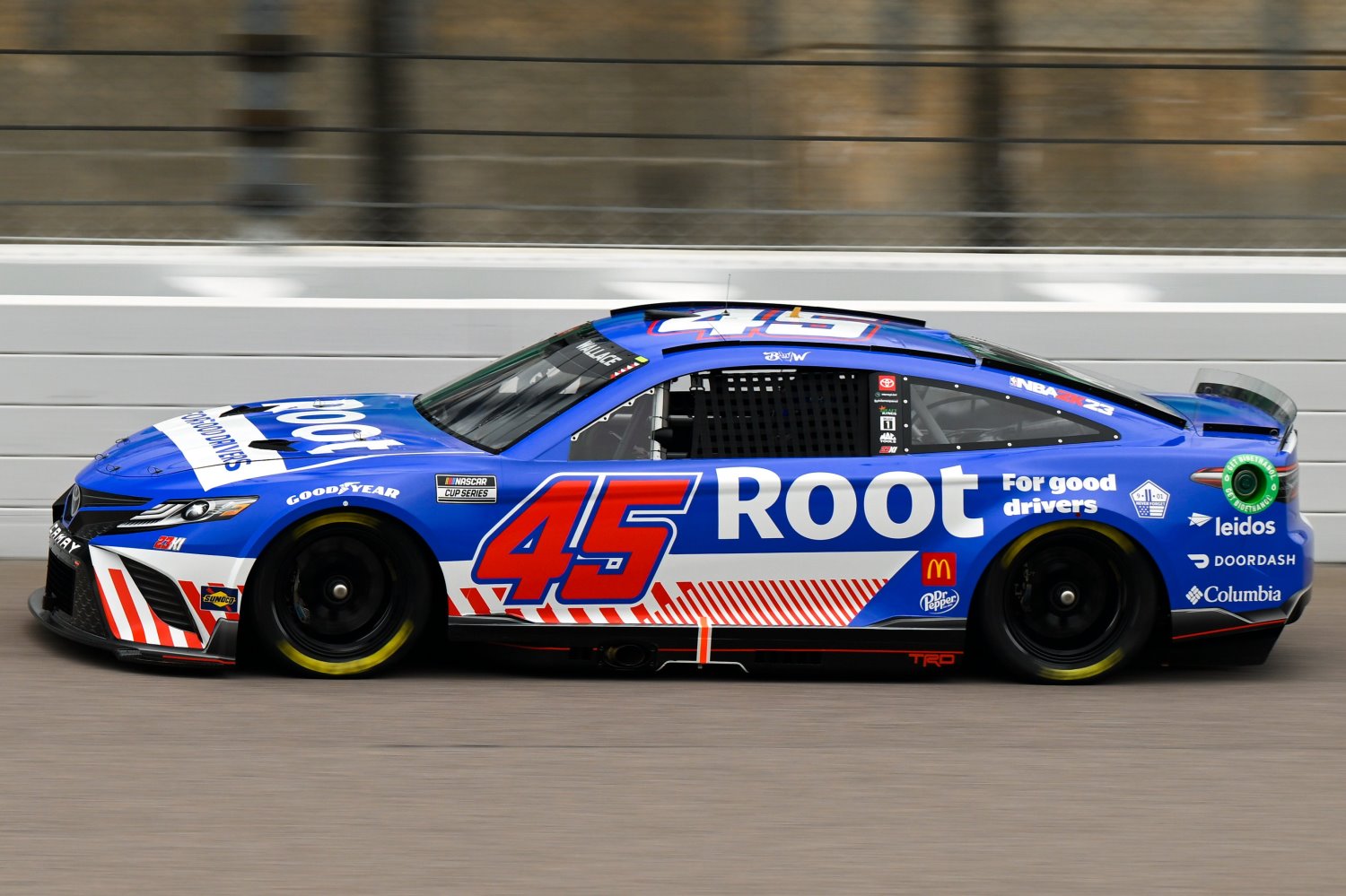 In the Spring Kurt Busch won at Kansas in the #45 Toyota. Taking over the car for the injured Busch, #45 Toyota driver Bubba Wallace won the Hollywood Casino 400 NASCAR Cup race at Kansas Speedway Sunday, 1.0s ahead of his team co-owner #11 Toyota of Denny Hamlin.

Hamlin’s JGR teammate Christopher Bell was third in the #20 Toyota.

Alex Bowman and Martin Truex Jr. rounded out the top-5 as Toyota took 4 of the top 5 positions as they have dominated on the 1.5-mile tracks all year.

Pole-starter Tyler Reddick dropped out early from Sunday’s NASCAR Cup Series race at Kansas Speedway, absorbing the impact of a Stage 1 wreck that placed a dent in his playoff hopes.

Reddick’s No. 8 Richard Childress Racing Chevrolet had led for 38 laps after an early competition caution, but he smacked the outside retaining wall at the 1.5-mile track, damaging the car’s right side.

“The right-rear tire just blew like we’ve had a few times,” Reddick said after a check at the infield care center. “At Fontana, I was able to save it. But here, it snapped at the worst possible point and we just killed the wall. It broke the control arm on the right-front, so our day was over.

“We leave here with not a lot of points, so we’ll have to fight hard at Bristol.”

Harvick’s No. 4 Stewart-Haas Racing Ford was running in tight quarters behind the No. 1 Chevrolet of Ross Chastain and the No. 45 Toyota of Bubba Wallace in the 33rd of 267 laps in the Hollywood Casino 400. When Chastain and Wallace drifted up in front of his car at the exit of Turn 4, Harvick’s car broke loose and walloped the outside retaining wall.

“When those two cars came up in front of me I just got super tight,” Harvick said. “When I lifted, it grabbed and got loose. I just wasn’t expecting them to come up and my car getting that tight.”

Harvick limped his car back to pit road, but the damage was too severe for him to continue. He will finish last in the 36-car field.

Kyle Busch found his own problems with an early penalty for pit-equipment interference, then a Stage 2 spin into the infield grass off Turn 4. He continued in the No. 18 Joe Gibbs Racing Toyota to a 26th-place finish.

What does this win mean to you?

“Man, just so proud of this team, so proud of the effort that they put in each and every week. Just thankful for the opportunity, right? Took this jump from an idea two years ago from a text from Denny before it all even happened. He was ready to get the deal done. Appreciate him. Appreciate MJ, Curtis, Gene. Everybody on that side of things, everybody at 23XI. Men and women there, they work their tails off. Just so proud. Pit crew was awesome today. We had one loose wheel. Just thankful. Thanks for the opportunity, and thankful to shut the hell up for a lot of people.”

What does it mean to race as hard as you had to? The one at Talladega was a little different, and then to have Denny Hamlin chasing you at the end.

“Yeah. I knew Denny was going to be strong. That’s the things I look at, is he wasn’t that good at the beginning of the day, and he comes up and finishes P2. And that’s what I want to start doing. When we don’t have the best days, just capitalize on moments like that. It’s cool to beat the boss, but man, we were just lights-out today once we got to the lead, and it was a lot of fun.”

Were you anxious all day?

“It’s funny. I ran into my old crew chief, Jerry Baxter after the truck race, and I text him. I said, Jerry, I think it’s going to be a good weekend. We called our shot. What a really cool paint scheme on our Toyota Camry root. They’ve done a lot for me in my career in a short amount of time. To throw honor to the people we lost on 9/11 is incredible. To put this in victory lane is really cool.”

How did you stay focused?

“Been doing this for a really long time. I haven’t won a race like that in a really long time, but just knowing getting excited is going to mess you up, so it was just cool, calm, and collected, and here we are.”

Do you want to say anything to the fans, your fans?

“True fans that are out there, thank you, guys. I love you. It’s been a tough road. You guys are the best. Let’s keep this train rolling. Thank you.”

What are your emotions right now with Denny Hamlin the driver finishing second, but the owner wins the race?

“It’s a good overall day. Just still frustrated about the first half of the race. We just aren’t executing all that well. Got to thank Acumatica for coming on, if you want to improve your business, they can help you do it. Thank you for coming on for Kansas. Really happy for our 11 Toyota team. They really fought hard and in that last half, they really made the car quite a bit better. Just really happy about the outcome and really happy for the 45 team and Bubba Wallace and Bootie (Barker, crew chief). Bubba’s just really worked hard on his craft and we’ve given him fast race cars and now he’s showing what he’s got.”

How hard were you trying to catch Bubba Wallace in the closing laps?

“I nearly wrecked to try to catch him and then I got bad loose and nearly got in the fence. I was driving as hard as I could. Nothing will ever come free if you’re driving for me. If you think I’m going to let you win, you better go get another job. Just so proud of the whole team.”

What more did you need to maybe go get the victory?

“Just got off a little bit on our balance that last run, but overall a great points day and very proud of everyone on this DEWALT No. 20 team. Great day for Toyota and happy for Bubba to get a win. He was really deserving, really fast all day. Great points day. We’ll move on and try and win one.”

How proud are you of this race team?

“I’m very happy that we’re finally getting the results that this team deserves. Our speed has been there all year, and I feel like we’ve given up a couple good finishes. Last couple of weeks we’ve been building on it, and hopefully we can keep the ball rolling.”