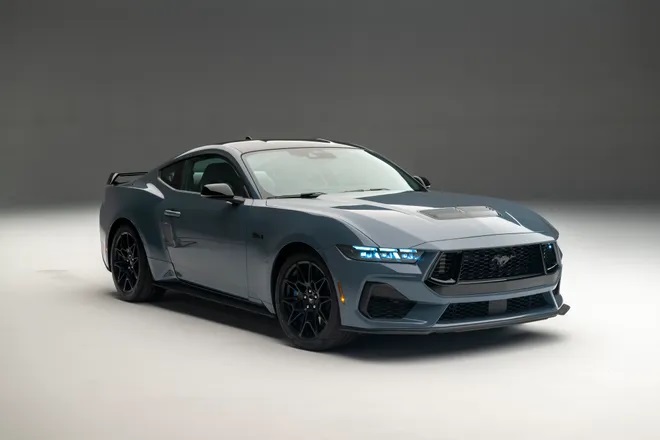 A more technologically advanced interior, “edgier” exterior and new engine options are among the highlights of the next-generation Mustang that Ford Motor Co. unveiled at the Detroit auto show Wednesday, with enthusiasts on hand to mark the next chapter of the iconic pony car. The 2024 NASCAR Cup car will be based on the new version.

The Dearborn automaker revealed the seventh-generation Mustang with an event at Hart Plaza that served as the culmination of a “Stampede” of roughly 1,000 Mustangs driving from Ford World Headquarters in Dearborn.

“When this car was being conceived, the first question I asked the team is, ‘Will it race at Le Mans?'” Executive Chairman Bill Ford told reporters. “‘And if the answer is no, go back and give me another answer.'”

“Mustang is raced at all the great tracks around the world, but there is no race or track that means more to our history than Le Mans,” said Ford. “It’s where we took on Ferrari and won in the 1960s and where we returned 50 years later and shocked the world again. Mustang will go back to Le Mans. Once again, we will Go Like Hell.”

The next-gen Mustang, redesigned for model year 2024, marks the latest chapter in a storied history that dates to the vehicle’s launch in 1964. The redesign is Mustang’s first since the sixth generation launched in 2015 as a global product for the first time.

The Mustang raced at Le Mans in 1967 and 1997, but Ford is more concerned now with the 2024 edition. Ford confirmed it will race the Mustang GT3, which will become eligible in 2024, according to Mark Rushbrook, global director, Ford Performance Motorsports. The car will also be available the same year to customers, starting with 24 Hours of Daytona.