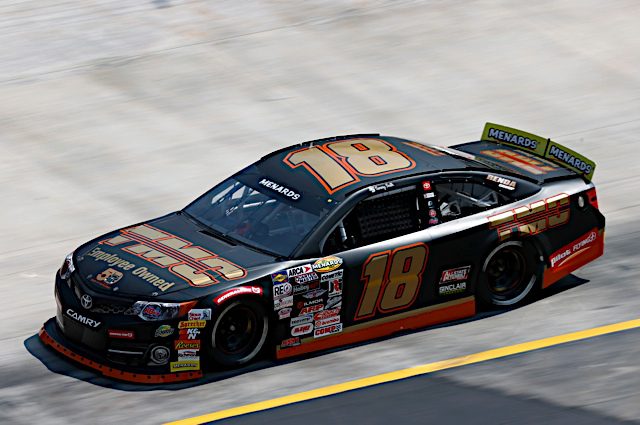 Sammy Smith dominated the ARCA Menards Series race at Bristol Motor Speedway from the pole on Sept. 15, holding off Brandon Jones in a two-lap shootout.

“It was tough [holding off Jones],” Smith told FOX Sports 1 in victory lane. “Thanks to all these guys, they brought a really fast car, and I wouldn’t have been able to do it without them. That was a tough restart there, but glad we were able to pull it off.

“I was telling these guys, the two championships mean a lot, but it wouldn’t be the same if we didn’t win the race.”

The 18-year-old has delivered consistent race results across all ARCA Menards Series racing action this season. In ARCA East competition, Smith won five of the seven events, with top-five finishes in the balance. In the 10-race Sioux Chief Showdown title chase, the Toyota development driver has scored top-five finishes in every start, with victories at Berlin Raceway and Elko Speedway in June, the Milwaukee Mile in August and Bristol Motor Speedway this evening.

“Sammy has consistently run up front since first competing in ARCA competition just one season ago,” said Paul Doleshal, Group Manager, Motorsports and Assets, Toyota Motor North America (TMNA). “We are happy to help him celebrate these accomplishments and look forward watching him continue to grow as part of the Toyota Racing driver development program.”

Smith expressed his gratitude to everyone at Joe Gibbs Racing and Kyle Busch Motorsports that have helped him be competitive every single weekend, but he said the goal for the rest of the year is to bring home as many wins as possible in both ARCA and Xfinity Series competition.

“These two championships mean a lot, but it wouldn’t have felt the same if we didn’t win the race,” Smith said. “All of these guys worked so hard all season and I’m glad we could pull this off.”

Along with his ARCA success this season, Smith also made his debut in the NASCAR Xfinity Series as the Iowa-native has run several events for Joe Gibbs Racing (JGR). He recently earned his first stage win and top-five finish at Watkins Glen International in August.

Smith drives a Toyota Camry for Kyle Busch Motorsports (KBM) in ARCA competition. This is the first two ARCA championships for KBM. Smith is the sixth Toyota driver to win the ARCA East title, and second to win two consecutive championships. He joins a list that includes Ryan Truex (2009 and 2010), Max Gresham (2011), Kyle Larson (2012), Harrison Burton (2017) and Tyler Ankrum (2018).