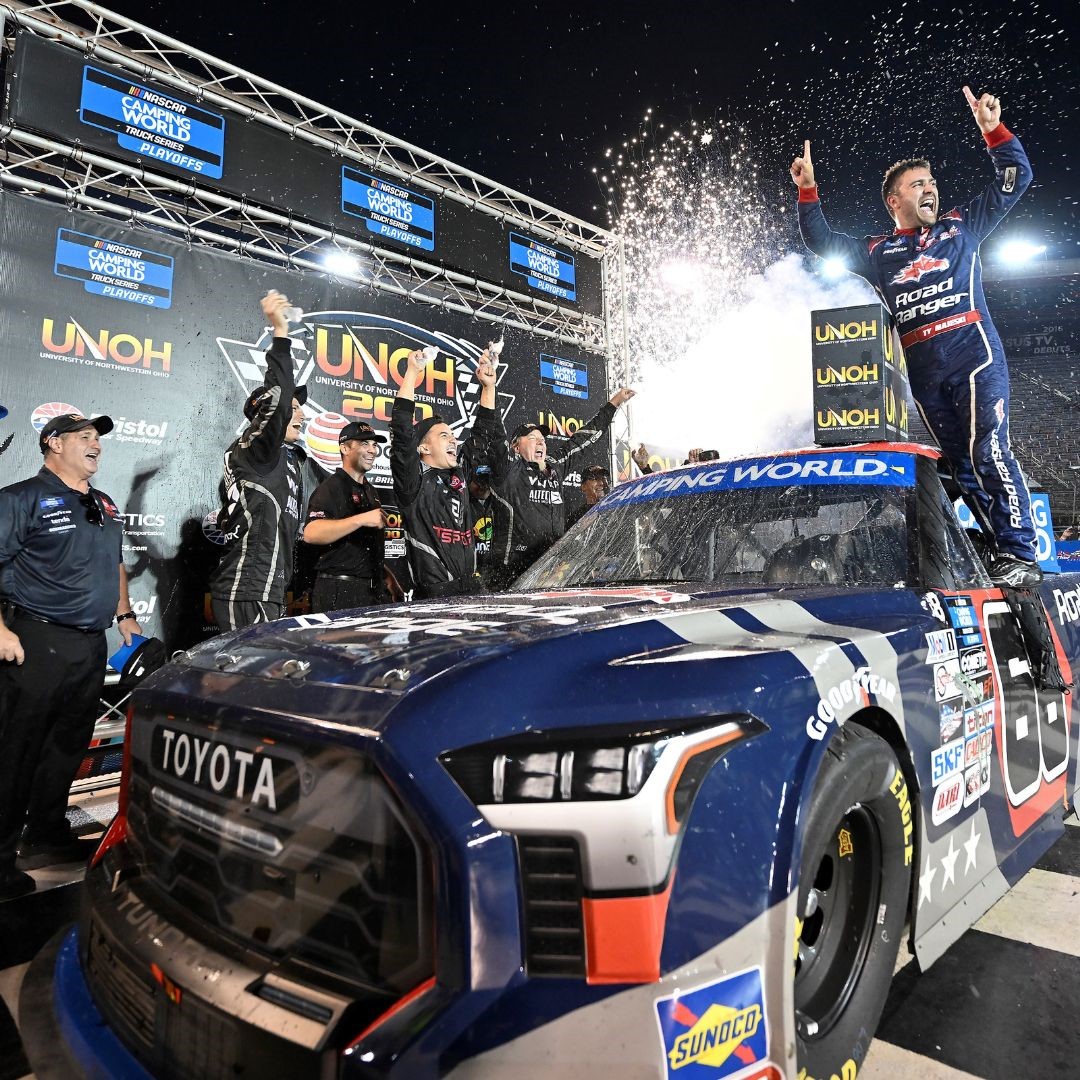 In reality, it was the most important moment to date in Majeski’s hardscrabble career.

Streaking away from Zane Smith after a restart with 12 laps left in the NASCAR Camping World Truck Series’ Round of 8 Playoff race, Majeski scored the first NASCAR national series victory of his career and claimed the first berth in the Nov. 4 Championship 4 finale at Phoenix Raceway.

“Awesome job! Thank you!” Majeski radioed to crew chief Joe Shear Jr. as he crossed the finish line. “Let’s polish this baby up, and let’s take this thing to Phoenix.”

To preserve the lightning-fast No. 66 ThorSport Racing Toyota that had carried him to victory, the short-track ace eschewed the customary burnout on the frontstretch, eliciting some good-natured boos from fans in the grandstands.

But nothing could dampen Majeski’s mood.

“Man, this is unbelievable,” said the 28-year-old from Seymour, Wisconsin. “I’ve been waiting for an opportunity like this… We came guns blazing for this race, took our best truck. Joe was aggressive on pit strategy—got us out front, and we were able to get it done.

“This is so cool. My career’s been so up-and-down… This is just damn cool—I’ve been waiting for this for a long time.”

Smith started from the rear of the field because of transmission issues that prevented him from qualifying. But after pitting under the first caution for Josh Reaume’s accident on Lap 37, Smith finished the race without returning to pit road.

The strategy put Smith in the lead for 39 laps, but Majeski had the superior truck and made the winning pass during a restart on Lap 156. He kept Smith at bay on two late restarts to seal the victory.

“A good salvage of the night,” said Smith, who crossed the finish line 1.152 seconds behind the race winner. “I tried matching the 66 (on the restarts). I did the first time, but on the second time, he just got me. He was ultimately just better than us. Still, a never-give-up kind of night. That’s what it takes to get to the final four.”

Chandler Smith led a race-high 89 laps and won the first two stages but was forced to pit for tires and fuel after the second stage and lost track position. He finished ninth behind fellow Playoff drivers Stewart Friesen and Christian Eckes.

Chandler Smith heads for the second Round of 8 race, Oct. 1 at Talladega Superspeedway, 24 points above the cut line.

Playoff driver John Hunter Nemechek slammed the outside wall during practice earlier in the day and started from the rear in a backup truck. He finished 12th.

Reaume, who spun sideways into the path of sliding Rajah Caruth’s Chevrolet on Lap 37, climbed from his truck after the driver’s-side impact but was taken to a local hospital for further evaluation.

Talking with @TyMajeski after his first career NASCAR Truck Series win at Bristol Motor Speedway. His ticket is punched for the Championship Four! pic.twitter.com/gBn9dCiFB3