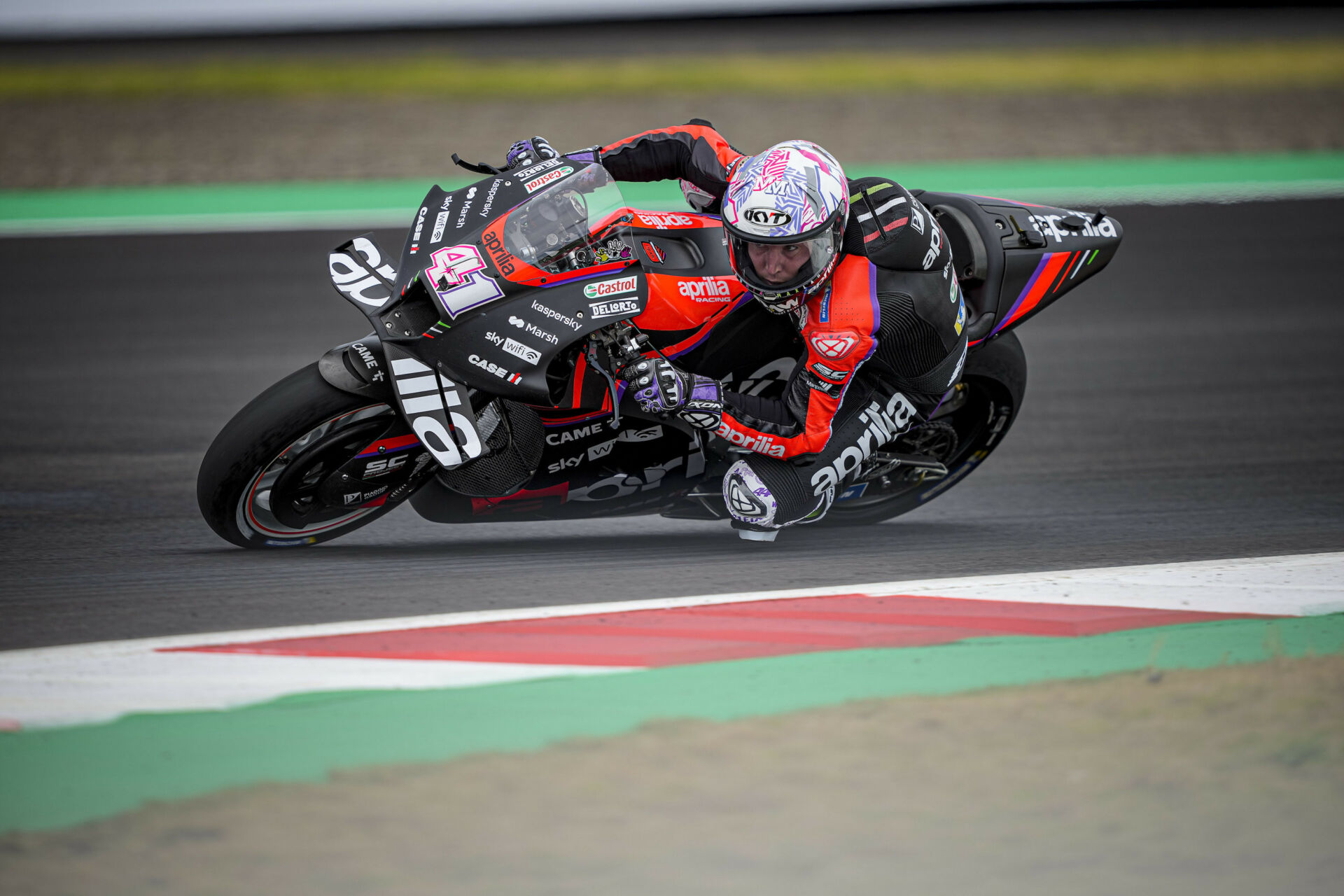 Aleix Espargaro turned the fastest lap in FP1 for the Aragon MotoGP despite crashing at turn 16, while Marc Marquez was 11th on his competitive return from major arm surgery.

Riding not too far from home turf, Espargaro clocked a 1:48.686s on medium compound Michelin slick tires during his first run, and that would prove to be the very fastest lap of the session.

However, Aprilia’s ‘Captain’ then had a spill at Turn 16 at the start of his second run, adding a sore left knee to the finger fracture which he sustained in last week’s Misano Official Test. Fortunately, he was able to hop back on a bike and accumulate some more mileage later in FP1, although then there was another mishap in the form of what looked like a ride height device issue during his practice start at the end of proceedings.

The Ducati Lenovo Team’s Francesco Bagnaia finished just 0.012 seconds slower as he seeks to make it five race wins in a row this weekend. Team Suzuki Ecstar’s Alex Rins was third on a 1:48.775, LCR Honda Idemitsu’s Takaaki Nakagami took fourth on a 1:48.862, and Prima Pramac Racing’s Johann Zarco claimed fifth with a 1:48.882 on his Ducati.

Five manufacturers in the top five, separated by less than two tenths of a second! It could have been six in the top six had Brad Binder not had a late flyer cancelled for a breach of track limits, but his Red Bull KTM Factory Racing team-mate Miguel Oliveira did take seventh all-told on a 1:49.005.

With teams having tested at Misano just days ago, there was a lot to keep an eye out for in the opening session at Aragon. World Championship leader Fabio Quartararo  rolled out a new YZR-M1 chassis and concentrated on a long run program as he took eighth on a 1:49.085.

Along the way, ‘El Diablo’ had an off at the Reverse Corkscrew, but no harm was done.

There was also plenty of attention on another World Champion, with the Repsol Honda Team’s Marc Marquez notching up 18 laps in his first Free Practice session since May’s Italian Grand Prix, his personal-best time of 1:49.207 leaving #93 in 11th on the timesheet.

Marquez admits he is far from certain to complete three MotoGP rounds in as many weekends as he prepares to make his comeback after three months out.

“My target, my goal is to try to finish all weekends from now on,” he explained.

“It’s true that the possibility’s on the table, because three races in a row are coming up, that maybe in Japan, maybe in Thailand, I need to stop in the middle of the weekend; we don’t know.

“But, my intention and my goal is to try and finish all these weekends, try to prepare the 2023 [bike] well, try to give my precise comments to Honda, and let’s see.

“[I will] Try to be better and better, and next winter is when I need to understand where the level is or where is the top level of my right arm.”

“About the podium, my possibilities are one percent; I mean, really, really low,” said the 29-year-old.

“One thing is that I’m really far from my best physical condition, especially always talking about arm condition about the muscles.

“The bone is fixed – that is most important – but the muscle conditions still are very far from what I want.

“The second thing is that Honda is in a very difficult moment – we saw that from the other riders – and we are far from the other manufacturers, so let’s see.”