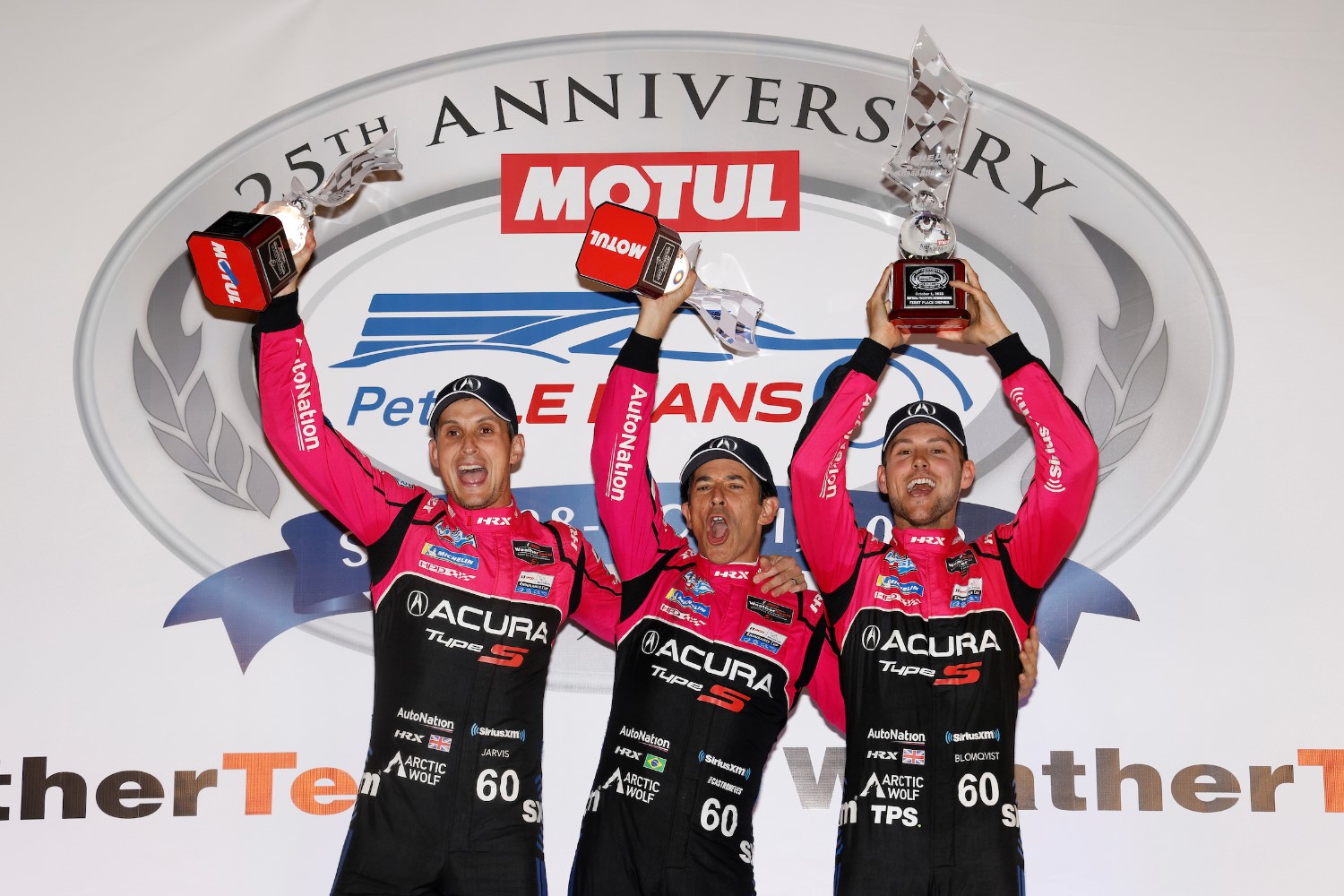 Tom Blomqvist, Oliver Jarvis and Helio Castroneves took victory over Action Express Racing’s Pipo Derani, Olivier Pla and Mike Conway in the ten-hour contest at Michelin Raceway Road Atlanta that ended under a full course caution robbing the fans of a race to the finish.

The race took a turn when the two Ganassi teammates collided into Turn 1, leaving both cars in the gravel.

The No. 02 Cadillac Accessories Cadillac DPi-V.R, which Earl Bamber drove to a front-row starting position on the 2.54-mile, 12-turn natural-terrain road course, was involved in an incident with the sister No. 01 V-Performance Academy Cadillac DPi-V.R in Turn 1 with 51 minutes left, essentially eliminating both cars from contention for the victory. The No. 01, co-driven by Renger van der Zande, Sebastien Bourdais and Scott Dixon, placed fourth. The No. 02 car finished fifth.

This promoted Albuquerque to the lead, with Blomqvist closely behind in second position.

When the two drivers then pitted under the subsequent position, MSR executed a quicker pitstop and Blomqvist beat the No. 10 car off pit road to assume the lead.

Blomqvist held off Albuquerque until he clipped the No. 57 Winward Racing Mercedes-AMG GT3 Evo while battling for the lead and took himself out of contention.

“Ups and downs, but in the end we were there to fight for the win,” said Derani, the 2021 DPi champion. “Unfortunately, I got really unlucky with traffic at the last restart, so I lost a lot of time and then I was catching them back. But that’s part of multi-class racing. The Cadillac was amazing. Most of my wins and the championship have been with this car. A great era that comes to an end, but I’m glad I am here to be fighting for the win.”

“This has been great; what an awesome opportunity,” said Johnson, the seven-time NASCAR Cup champion. “I’m so thankful to Ally, Action Express and Hendrick Motorsports. I’ve been able to meet and race with a lot of great people. It’s really been a fun two years.”

The No. 01 Cadillac of Van der Zande, Scott Dixon and Sebastien Bourdais finished fourth, with the sister car of Bamber, Alex Lynn and Ryan Hunter-Reay completing the top five, with both cars having been repaired following their clash.

Tower Motorsport’s John Farano captured the LMP2 title by beating the father-and-son pairing of Juan Pablo and Sebastian Montoya to the class victory.

The No. 8 Oreca 07 Gibson of Farano, Louis Deletraz and Rui Andrade came out ahead of the No. 81 DragonSpeed Oreca driven by the Montoyas and Henrik Hedman.

Deletraz sealed the victory and the title in the process by passing the elder Montoya with less than 30 minutes left on the clock.

The trio fended off pressure from the No. 30 Jr III Racing Ligier of Garett Grist, Nolan Siegel and Ari Balogh to take the win with a controlling performance in the second half of the race.

Gradient Racing has claimed a breakthrough GTD class victory in Saturday’s Motul Petit Le Mans, with the team’s Acura NSX GT3 Evo22 finishing ahead of the top GTD Pro competition on the road in the ten-hour contest at Michelin Raceway Road Atlanta.

Mario Farnbacher drove the No. 66 Acura the win under full course caution over the No. 70 Inception Racing McLaren 720S GT3 of Jordan Pepper, which saw the top five GTD cars all place ahead of the GTD Pro class-winning Ferrari, which was later stripped of its class victory due to a drive time infraction.

On-track testing will continue into the new year, with IMSA-sanctioned testing on Oct. 3-5 and Dec. 6-7. The Rolex 24 At Daytona on Jan. 28-29 opens the 2023 IMSA WeatherTech SportsCar Championship season. The WEC season commences with the 1,000 Miles of Sebring on March 17.