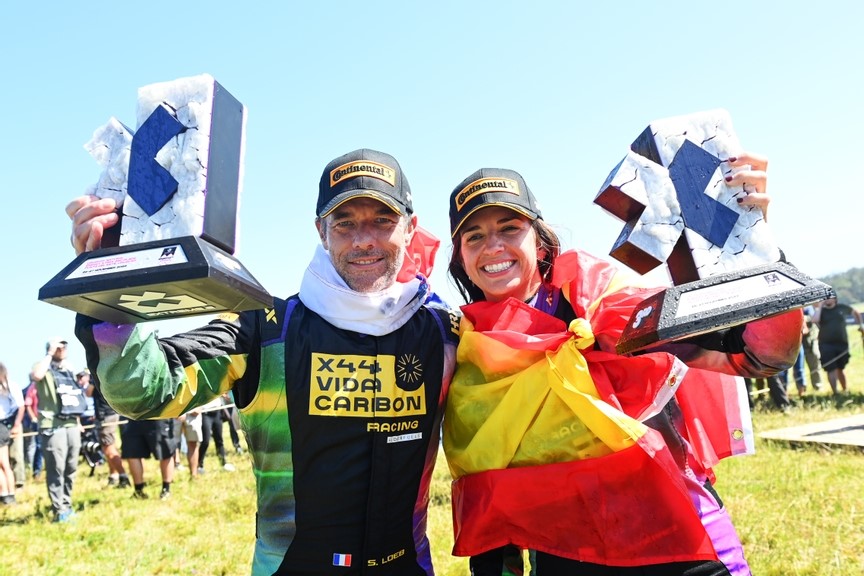 X44 Vida Carbon Racing finished third by half a second in the Uruguay Natural Energy X Prix to secure championship glory in a Final that went right down to the wire, with ABT CUPRA XE securing a maiden X Prix victory.

X44 entered a Final that was missing three of the top four teams in the championship standings, including leaders RXR.

As their closest rivals watched on from the paddock, Sébastien Loeb and Cristina Gutiérrez secured the podium finish needed to take their maiden Extreme E title, just two points clear of RXR in the standings, having bagged a crucial five points from the Continental Traction Challenge in Qualifying 2.

Cristina Gutiérrez, X44 Vida Carbon Racing, said: “I still can’t believe it! It was a very tough weekend for us, especially after my roll yesterday. The team did a crazy job with the (spare) car and Qualifying 2 was the first time we had driven it.

“As for the Final, on the radio they told me someone was going to be penalized but still I didn’t know. I wanted to be sure that we won so I did not celebrate before it was official. It was a rollercoaster, but it is much better than that for us as we can now believe in what we have achieved.”

Sébastien Loeb, X44 Vida Carbon Racing, said: “We could only go and compete with everything we had and try to score maximum points. In the Final, it was a critical moment because I was fourth and we needed to be third. We had some contact here and there, but there was nothing I could do to overtake. Cristina did a great job to stay very close to the car in front and we knew potentially we were third. At the end it was what we needed so I’m really relieved to be here and really proud to win this championship.”

Alejandro Agag, Founder and CEO of Extreme E, added: “I think the season finale was an amazing rollercoaster. Everything was open!

“There was an incredible comeback from X44 Vida Carbon Racing and bad luck for Rosberg X Racing, who have done some incredible things this season. Once again the championship decider was close, with the season going down to the wire, so we’re ready for a fantastic campaign next year!”

The stakes were high, and from the outset it was clear that it would be no easy task for X44 Vida Carbon Racing. ABT CUPRA XE’s Nasser Al-Attiyah and Veloce Racing’s Kevin Hansen surrounded Loeb as the trio approached the opening sequence of corners.

A fantastic move from Loeb seemed to have taken the lead for the Frenchman, as he carried his speed through a wider line, until Al-Attiyah surged up the inside to steal first.

With the title on the line, Loeb kept the ABT CUPRA XE within reach, but as the leading teams tussled for supremacy, NEOM McLaren Extreme E’s Tanner Foust timed his attack perfectly, charging through to take second away from X44 Vida Carbon Racing.

Championship glory slipped further and further away from the challengers, as Timmy Hansen managed to get past the recovering Loeb to secure third for Genesys Andretti United Extreme E. A masterclass in defending followed, with Hansen keeping Loeb at bay as the teams approached the Switch Zone, where Gutiérrez would pick up the fight with Catie Munnings.

A five-second penalty for Veloce Racing, from Hansen hitting a waypoint flag on his stint, took the pressure off X44 Vida Carbon Racing from behind, but the heat was on to overtake Genesys Andretti United Extreme E.

Gutiérrez threw her ODYSSEY 21 into every corner but was struggling to gain enough ground on Munnings up ahead. What’s more, the Spaniard was under investigation for a collision with Veloce Racing’s Molly Taylor, for which she would later receive a five-second penalty.

Just as time seemed to be running out for X44 Vida Carbon Racing, a seven-second penalty came through for Genesys Andretti United Extreme E for speeding in the Switch Zone.

This was the lifeline that Gutiérrez needed as she fought to stay close enough to the Genesys Andretti United Extreme E ODYSSEY 21. The Spaniard crossed the line in fourth but within two seconds of Munnings, thus securing third place and the championship title for X44 Vida Carbon Racing, just two points clear of RXR.

Further up the field, a measured drive from Klara Andersson kept Emma Gilmour in her mirrors as the NEOM McLaren Extreme E driver chased a maiden podium for the team. Gilmour secured second, while Andersson and Al-Attiyah’s performances earned ABT CUPRA XE their first X Prix win and back-to-back podiums during the pair’s first Extreme E campaign.

Behind the tussling Gutiérrez and Munnings was Veloce Racing. Fifth place marked an impressive turnaround for the team and an amazing comeback from Molly Taylor as she returns to the Extreme E championship and competitive ways.

Klara Andersson, ABT CUPRA XE, said: “Wow! There are just so many emotions in me right now to be honest. I’ve been waiting for this for so long.

“It’s only my second Extreme E race, and my first proper Extreme E race weekend, so to be on top of the podium is huge. I couldn’t have done it without Nasser and the whole team.”

Nasser Al-Attiyah, ABT CUPRA XE, said: “Thank you to the team and thank you to Klara. We had an amazing weekend and we are happy to win the last race.

“Now we have a lot of confidence to come back next year and fight for the title!”

Tanner Foust, NEOM McLaren Extreme E, said: “There was mayhem at the start, which is weirdly what you hope for when you’re last. I ended up coming out in second I think, and I had Timmy [Hansen] behind me and I got almost rolled. It was a push to stay in second place on the first lap and then Emma [Gilmour] came through – she was awesome.”

Emma Gilmour, NEOM McLaren Extreme E, said: “It’s just fantastic – the team has worked so hard all year. We’ve had a few setbacks along the way so this is for the team, we couldn’t do it without them. I’ve got a fantastic teammate in Tanner and I’m just so happy to finish on this high note for the season.”