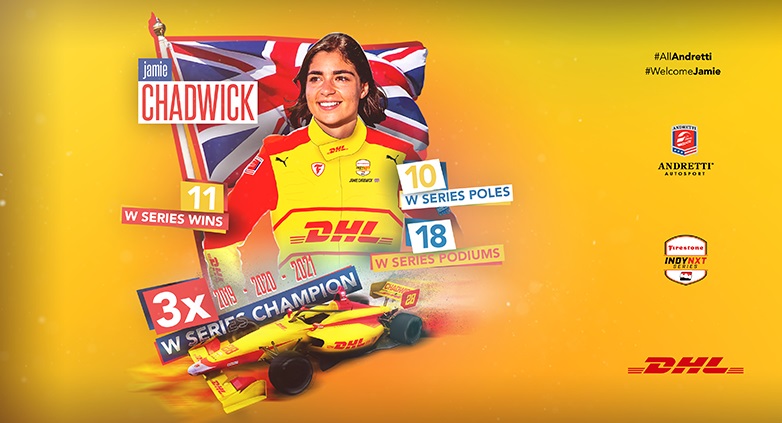 Williams Racing is delighted to announce that Jamie Chadwick will be competing in the 2023 INDY NXT by Firestone Series with Andretti Autosport. The three-time W Series Champion will take part in the 14-race season in the United States which includes three double-header events. Jamie will become the first female in 13 years to compete full-time in the INDY NXT championship.

The Williams Academy driver recently claimed her third consecutive W Series title in 2022 after a dominant season winning five out of seven races and finishing 50 points ahead of the nearest competitor.

Jamie Chadwick: “I’m really happy to be stepping up into INDY NXT next year. It’s a great opportunity for me to be able to get a lot of seat time and continue my development. Racing for a team like Andretti is going to be an amazing experience and I’m really looking forward to racing in the United States. A massive thank you to Williams for the support they’ve given me on my journey since joining the Academy in 2019.”

Sven Smeets, Sporting Director, Williams Racing: “We’re very excited to see Jamie embark on a new chapter in INDY NXT. Throughout this year Jamie displayed an incredible level of skill and determination to claim her third W Series title. We look forward to supporting Jamie with her challenge stateside.”

DHL, the world’s leading express and logistics company, will serve as primary sponsor of Chadwick’s entry, partnering with Andretti Autosport and Jamie to grow the company’s long-standing partnership with the team, dating from 2010. Supporting Jamie Chadwick is a natural progression that aligns with DHL’s global values in creating inclusion for all, including the development of women around the world through its global partnerships and within its business.

The British racing driver joined the female free-to-enter Championship, W Series in its inaugural season in 2019 and achieved two race victories and three podium finishes which saw Chadwick win the 2019 W Series Championship. Chadwick continued her positive trajectory claiming the 2021 and 2022 W Series Championships while being named as a Formula 1 Reserve Driver for Williams Racing. Jamie will remain part of the Williams Racing Driver Academy in 2023 with an enhanced role to be announced in due course.

DHL and Andretti Autosport, a pioneer in driver development, see this new signing of the first confirmed female in the 2023 INDY NXT championship as an important part of continuing to support the development of young talent particularly in the male-dominated environment of racing.

“Andretti Autosport is proud to be supporting Jamie alongside DHL for the 2023 INDY NXT season. Jamie’s successful career speaks for itself, but the INDY NXT series gives Jamie the opportunity to continue her development in a new type of racing. DHL is a long-standing team partner; we are happy to welcome them to the INDY NXT series and excited to welcome Jamie to the team. We’ve turned out five INDY NXT champions over the years and look forward to continuing our role in developing new talent.”

“DHL are proud to partner with Jamie as she takes the next progressive step in her motorsports career. As the most international company in the world, DHL has a strong focus on Diversity, Inclusion and Belonging. Jamie is a fantastic example of inclusion & women empowerment within motorsports. As the Number 1 Great Place to Work for a second year, we want to further reinforce our position with regards to diversity & inclusion and feel that the partnership with Jamie is great platform do this through the values we both share.”

“I’m hugely excited to be joining Andretti Autosport for the 2023 INDY NXT season with DHL. My aim is always to challenge myself and continue my progression as a driver and this represents not only a big step up but also a big step towards my goal of competing in the highest categories of single seater racing. Andretti Autosport’s standing in the sport is second to none and I hope to bring more success to such a prestigious team. I can’t wait to get started.”