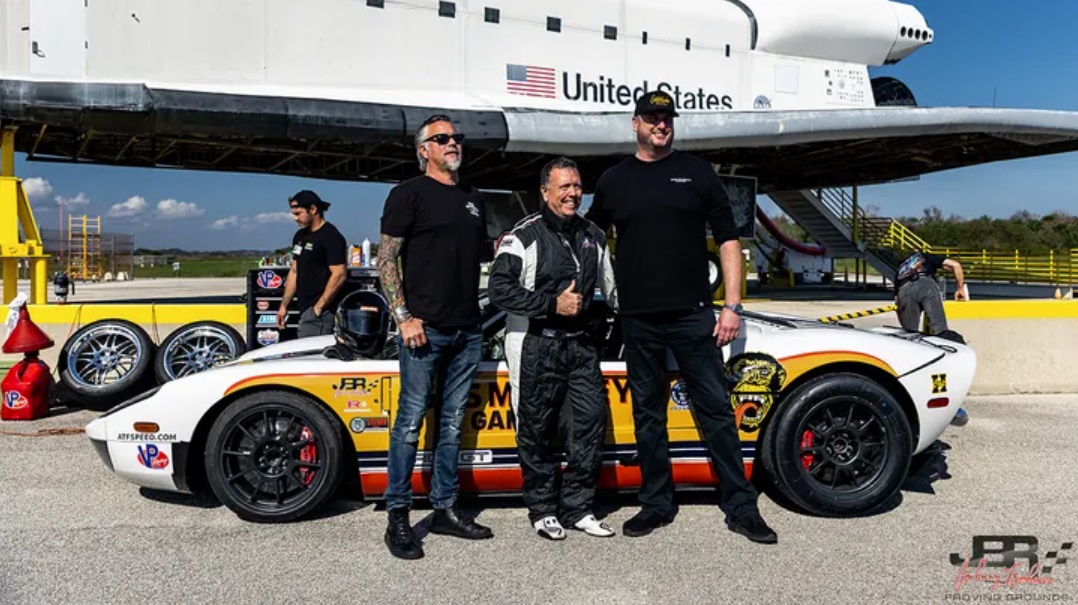 On Dec. 9, 2022, Johnny Bohmer, the owner and driver of the Gas Monkey Garage-sponsored 2006 Ford GT known as the “BADD GT,” achieved a top speed of 310.8 mph (500.1 km/h) at Space Florida’s Launch and Landing Facility, located in Kennedy Space Center, Florida, making this car the fastest street legal car in the world. Not only does the BADD GT operates on E-85 fuel but it is regularly seen driving around south Florida taking Bohmer’s kids to school and running errands.

This test was performed in conjunction with the testing program Bohmer created and developed for his company and vehicle design program, Johnny Bohmer Proving Grounds, LLC, which provides guidelines, consulting and testing in accordance with numerous testing facilities throughout the United States.

“We’ve been blown away by the capabilities of this car,” said Gas Monkey Garage’s Richard Rawlings, who began sponsoring the car in 2016. “Johnny and I are committed to showing the world the kind of speed that this car can achieve and feel we can create records that will last for years.”

Along with having valid registration and insurance, the BADD GT has cold AC, electric windows and all of the amenities of a modern automobile including a passenger seat, functioning stereo, turn signals, etc. The top speed was measured not only through a Racelogic VBox Performance Box Touch but also by four Garmin Ultra 30 cameras, FuelTech’s ECU and Racepak.

This extraordinary speed was achieved while Bohmer and his team were gathering data testing the new FuelTech FT600 ECU system without a specific distance in mind. The car performed so well during this test with the FuelTech traction control and Jason Gatlin’s tuning capabilities, that Bohmer decided to stay on the throttle through the final drive gear. Bohmer thinks he has just begun to push the limits of this car.

“We believe the BADD GT can do much more than break the record,” Bohmer said. “In its current configuration, we have another 500-700 horsepower that we can work with to really boost the top speed.”

The story of the BADD GT starts in 2006, when Bohmer purchased the vehicle brand new off the showroom floor, with the goal of building the world’s fastest street car and breaking the 300 mph barrier. In 2010, the BADD GT was the first street car to break 250 mph in the standing mile.

From there, Bohmer, BADD GT and his team would go on to achieve a Guinness World Record in 2012 for the Fastest Standing Mile in a Street Car at 282.232 MPH, a record that remains unbroken to this day. This new top speed of 310.8 MPH that was achieved during testing is the culmination of 16 years of hard work.

“We’ve been blown away by the capabilities of this car,” said Gas Monkey Garage owner Richard Rawlings. “Johnny and I are committed to showing the world the kind of speed that this car can achieve and feel we can create records that will last for years.”

The retired, nearly three-mile-long landing strip the feat was achieved on is located at the Kennedy Space Center and primarily used today for car testing overseen by the Johnny Bohmer Proving Grounds company and other special events.