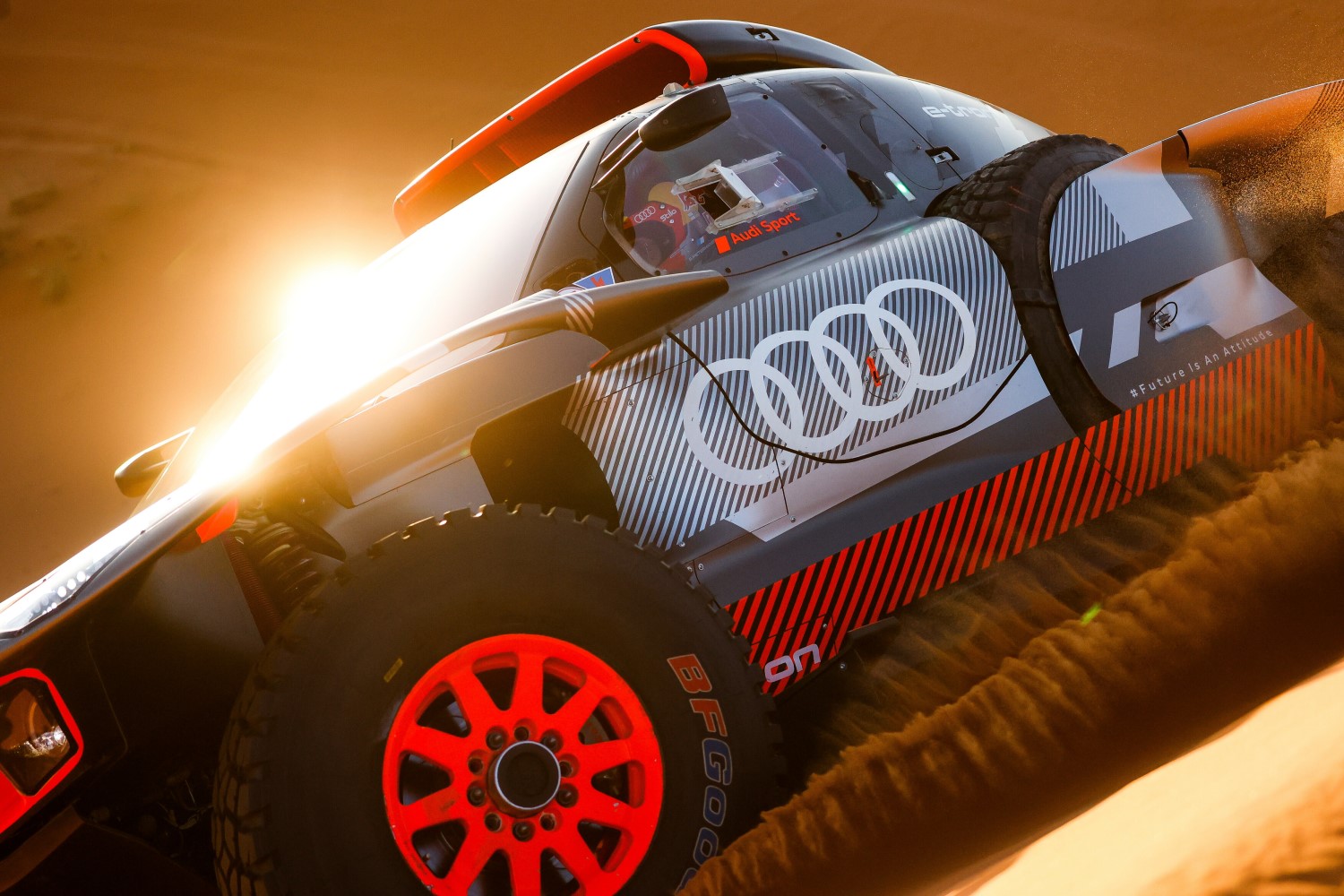 Revolutionizing the sport in an energy-efficient way and being among the best in the process: Audi has set itself no lesser task for the RS Q e-tron’s second outing in the Dakar Rally. Head of Audi Sport Rolf Michl has set Team Audi Sport a clear goal: After four stage victories were possible at the first attempt in the first appearance last January, the aim from December 31, 2022 to January 15, 2023 is to achieve a podium result in the overall standings for the innovative prototype with its electric drive, energy converter and high-voltage battery. The concept won the Racecar Powertrain of the Year Award in December from a panel of experts from Race Tech magazine.

Starting on New Year’s Eve, Mattias Ekström/Emil Bergkvist, Stéphane Peterhansel/Edouard Boulanger and Carlos Sainz/Lucas Cruz will measure themselves against the competition in a prologue and 14 subsequent stages.

Seventy percent of the route in Saudi Arabia is new to the teams. The ASO organizers have significantly increased the sporting demands: At 350 to 500 kilometers, the stages between the Red Sea and the Persian Gulf are longer and more difficult than last year. The Empty Quarter with its towering dunes is particularly demanding. “We feel a nice sporting tension but also feel thoroughly prepared for the rally,” says Rolf Michl, Head of Motorsport at Audi. “Our car is now very reliable. The improvements compared to the first-generation RS Q e-tron are significant. Our processes are much more well-rehearsed as well. Our goal is a podium position. We’ve prepared as thoroughly as possible, but all external factors remain unpredictable. We won’t experience them until the Dakar itself.”

All three driver squads will be competing with a significantly improved second evolution of the Audi RS Q e-tron. It is homologated in the T1-U category, which has been paving the way to a low-emission future in cross-country rallying since 2022. The front and rear axle drive is electric, with the electric engines getting their energy from a high-voltage battery. A revised control system optimizes the energy balance of various systems. A highly efficient energy converter consisting of a four-cylinder turbocharged engine and an additional motor-generator unit (MGU), which runs in the optimum operating window and charges the battery, processes reFuels for the first time. Based on biogenic plant parts that do not compete with food, they help reduce CO2 emissions by more than 60 percent.

“In our preparation for the toughest rally in the world, we left nothing to chance,” says Uwe Breuling, Head of Vehicle Operations. “We learned a lot at rallies and tests in our first year and implemented everything consistently – technically, logistically and organizationally. The close cooperation between Audi Sport, drivers, co-drivers and Team Q Motorsport is paying off and running very smoothly.”

During extended tests and a rally in October, the second generation of the RS Q e-tron demonstrated reliability and performance. “We tested the cars in detail in Neuburg after the rebuild and gave the drivers and co-drivers a chance to drive them again,” says Arnau Niubó Bosch, Project Manager Vehicle Deployment. “Our engineers thoroughly trained Mattias, Emil, Stéphane, Edouard, Carlos and Lucas in the use of technology so that they can help themselves in the event of damage during the stages. With 15 days of competition, just one bad day can mean lost opportunities.”

Mattias Ekström, last year’s best Audi driver in ninth place, praises the team: “The details in the cockpit, our set-up plans, the instructions, practicing the tire changes, the search for the optimum: we really went about our work thoroughly. Detailed decisions on the choice of springs, for example, we make depending on the route, whether we’re more likely to drive on stony ground or in sand.” His co-driver Emil Bergkvist noted a noticeable step forward in Morocco: “We understood the roadbook better there. It allows us to drive at a higher level and be more consistent. Likewise, we worked out a good strategy for the rally with the engineers.”

Stéphane Peterhansel, record holder in the Dakar Rally with 14 victories, will be competing in the desert classic for the 35th time. “We have gained confidence over the course of the year,” judges the Frenchman. “The durability of the car is very good. There is noticeably less stress throughout the team. Three parameters make the difference: the technology, the performance of us drivers and that of the co-drivers. I expect very strong competitors from Toyota and BRX.” Edouard Boulanger shares his driver’s views and has his eye firmly on the competition: “We are in a very different situation than a year ago. The spirit in the team is different, everyone knows the Dakar now. The atmosphere is at its best. But every competitor also has new specifications in their cars. We don’t know anything yet about the new balance of power.”

For three-time Dakar winner Carlos Sainz, the focus is on the team’s noticeable development in a very short time: “You can’t compare the current situation with that of a year ago. The experience with the new car helps a lot, so our goals are also changing. In 2022 we were cautious, and now we hope we can race for the top. The biggest challenge remains the Dakar itself. Every day holds surprises.” His co-driver Lucas Cruz feels well prepared for these situations: “We got to know the new car very thoroughly so that we can repair it ourselves in case of doubt. For us, the stages in the Empty Quarter will be the highlight. We have a long Dakar ahead of us with additional days in the desert.”

Sven Quandt of Q Motorsport sums up his decades of experience as a driver and team boss: “This year we were ready on time and sent the cars off by ship. A year ago we had to ship them by plane, that’s how late it was. Since the shipment, however, there are still a lot of preparations to be made – including with the FIA and planning for the Dakar. As confident as we are, you can never be too confident at the Dakar. It’s not just about the performance of technology and people, but also about luck. And you can’t predict that. But we are well prepared. This year the route contains really high dunes again, last year the dune passages were rather easy. The rally demands a lot from all of us: It lasts two weeks, but from the moment we arrive we are effectively in the desert for three weeks. It remains to be seen how good our opponents are. None of them showed their full capabilities in 2022. Maybe we won’t see who is really how strong until two, three or four days later in January.”