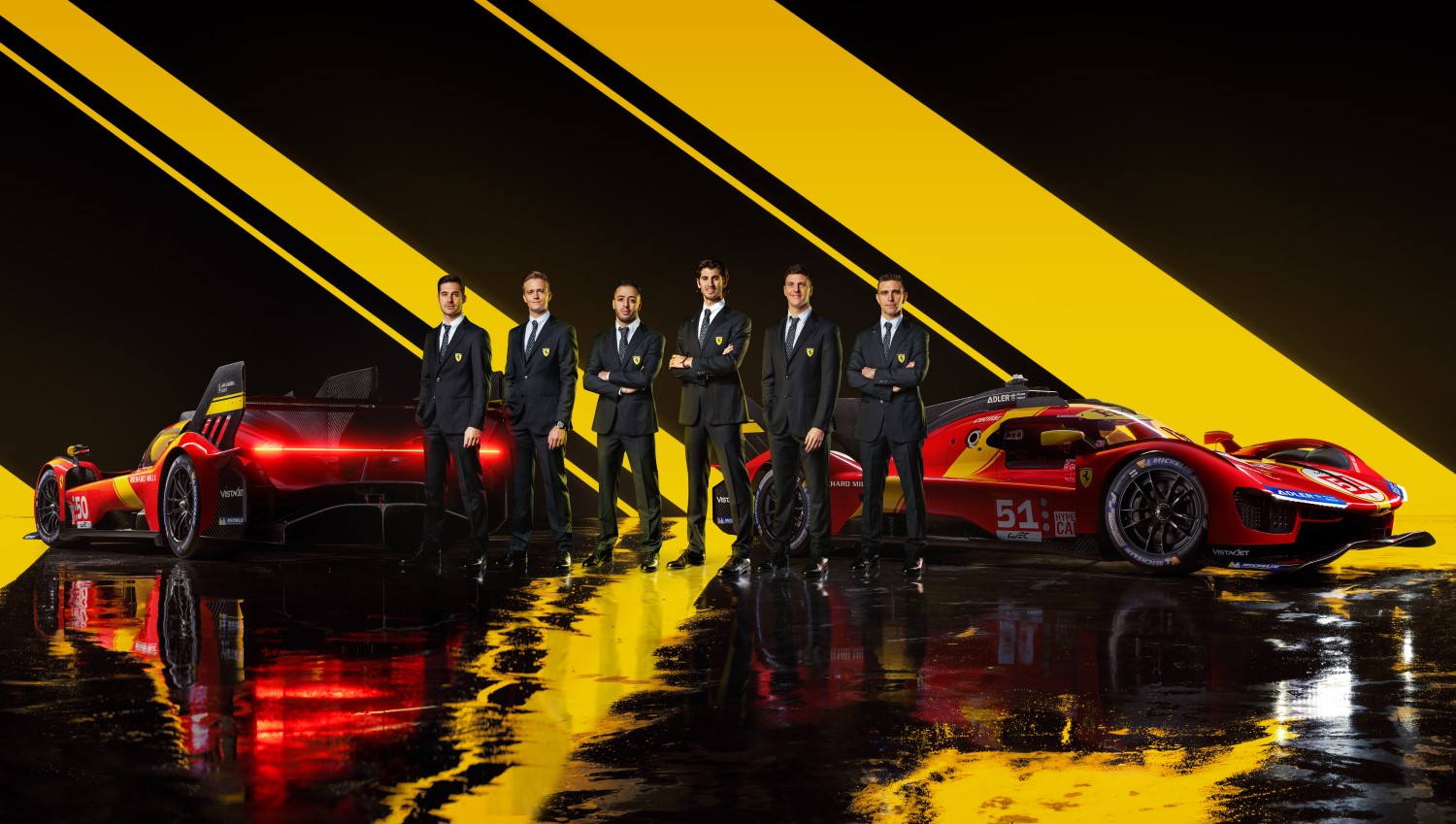 Ferrari officially announces its crews for taking on the 2023 season in the Hypercar class of the FIA World Endurance Championship in the 499P that was officially presented at the Finali Mondiali in Imola. The drivers chosen to bring the Prancing Horse back to the top class of the world championship represent a unique mix of talent and experience, speed and stamina, essential qualities in endurance racing.

499P number 50. Antonio Fuoco, Miguel Molina and Nicklas Nielsen are the three drivers set to take turns in the car that proudly bears the number 50, chosen to mark the years that have passed by since Ferrari last raced in the top class of the endurance world championship. Italian Antonio Fuoco, born in 1996, is rapidly establishing himself as one of the most talented drivers on the endurance racing scene and, together with Spaniard Miguel Molina, won the 8 Hours of Bahrain, playing a decisive role in winning the Manufacturers’ World Championship title with a great season finale. Molina, born in 1989 and European Le Mans Series champion in 2021, brings experience and determination to the crew. Danish driver Nicklas Nielsen, born in 1997, after becoming World Champion in the LMP2 Pro-Am class, completes a unique journey that has featured the Ferrari Challenge as an extraordinary accelerating element and has seen him win at least one continental or world championship title without interruption since 2018, always at the wheel of Prancing Horse cars.

499P number 51. Alessandro Pier Guidi, James Calado and Antonio Giovinazzi make up the crew that will share the work of racing the car bearing the number 51, one of the most successful in Ferrari history. After becoming World Champions for the second time in a row (the third in their careers) in the LMGTE Pro class, Italy’s Alessandro Pier Guidi, born in 1983, and Britain’s James Calado, born in 1989, will take on the challenge of earning the winners’ laurel in the top class together. This partnership, now in its sixth season in the world championship, can boast a unique list of triumphs: no one before them has been crowned champion twice in a row in the LMGTE Pro class and no crew has won three laurels (2017, 2021, 2022). The numbers of the British-Italian pairing over seven seasons in the WEC represent an unmistakable calling card: 11 wins and 23 podiums from 39 starts. The pair of world champions can count on the speed of Italian Antonio Giovinazzi, born in 1993, who is competing full-time in the endurance world championship for the first time after his experience at the 24 Hours of Le Mans in 2018, where he made his presence felt. With Scuderia Ferrari since 2017, Giovinazzi will continue as a reserve driver in 2023.

Antonello Coletta, Head of Ferrari GT Sporting Activities: “With the choice of crews, we have completed the last step of the program ahead of our debut at Sebring. Since the 499P’s first shakedown in July, we have worked non-stop involving the drivers of the Ferrari family. The decision regarding our chosen drivers relates not only to the races we will contest, but also to the growth that will continue during the championship. We are very clear about what we can ask of them concerning development and consistency, not just speed”.

Alessandro Pier Guidi: “I am very proud to have been chosen as one of the six drivers to race the Hypercar, a car whose importance – also historical – is very clear to us. Driving an official Ferrari makes you proud, but the 499P is a step further. There are high expectations, even more so because we are racing for Ferrari. We have a big season ahead, but I am preparing hard to be ready. Sebring is just around the corner, but we still have tests to be ready for the first race, although our actual level will become apparent with the European races”.

James Calado: “I am delighted to be involved in the Le Mans Hypercar project. Fighting for overall victory in races and the championship in Ferrari colors is a dream come true. I have been involved in the 499P’s development and know its potential in the run-up to this FIA WEC season. We will continue to fight as a team, doing the utmost for everyone involved. I want to thank Ferrari and especially Antonello for this opportunity”.

Antonio Giovinazzi: “The 499P’s debut will be a defining moment in the history of the Prancing Horse, and it will be a big honor for me to be part of this extraordinary moment. We know we have a great responsibility to meet with much humility, but we are aware of our strength and ready for this huge challenge”.

Antonio Fuoco: “It’s a big thrill for me to be part of this program because Ferrari’s return to the top class of the World Endurance Championship after 50 years is historic. It’s a huge responsibility for all of us, but at the same time, we are all very motivated to do a great job. Personally, I am looking forward to this new program because it’s special to me, having witnessed its birth and development. We are working hard during testing, and I look forward to racing at Sebring”.

Miguel Molina: “I am delighted to have this opportunity, and I want to thank Ferrari for believing in me. Racing in the FIA WEC’s top class is one of the most significant sporting achievements of my career. It’s a pleasure to represent Ferrari in an important year, 50 years since its last race in the top class of the world championship. Words can’t explain how I feel because this goal represents the pinnacle of my career and a dream I have long pursued”.

Nicklas Nielsen: “It’s difficult to explain what I feel right now. I contested my first race with Ferrari in 2017 and am now part of the Hypercar program. It’s incredible to be one of the first six drivers to drive the 499P in its debut season in the World Endurance Championship. I am very proud and happy about the support and trust placed in me by Ferrari, Antonello, and Amato Ferrari. It’s been an incredible journey so far, and I hope it continues for a long time. I can’t wait to start working alongside my teammates. Driving the Hypercar represents a massive step forward for my career”.