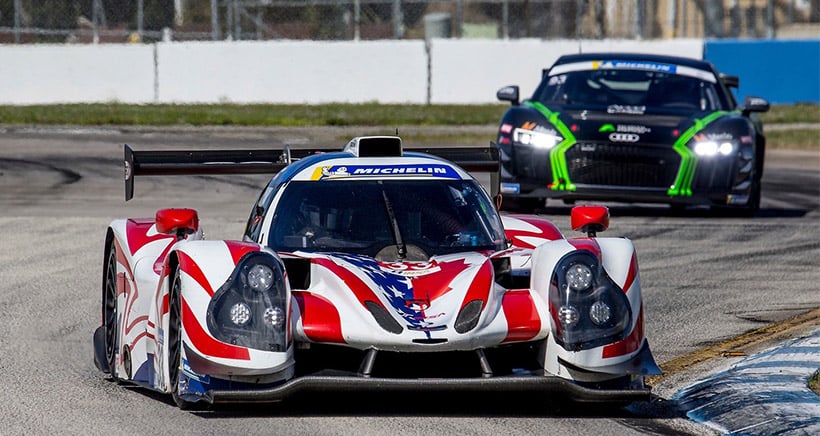 As shown on our Weekend TV Schedule, a new season of IMSA racing kicks off with the newest series in the IMSA portfolio during Roar Before the Rolex 24 activities at Daytona International Speedway.

The IMSA VP Racing SportsCar Challenge makes its debut with a pair of 45-minute races, the first of six such doubleheader weekends on the inaugural schedule. The development series for Silver- and Bronze-rated features Le Mans Prototype 3 (LMP3) and GT4 cars competing on the same track at the same time in a sprint-race format with no scheduled pit stops. The VP SportsCar Challenge succeeds the IMSA Prototype Challenge, which ran only LMP3 machinery in races of 90 minutes or three hours that mandated at least one pit stop.

“The IMSA VP Racing SportsCar Challenge offers great new opportunities for aspiring IMSA drivers and teams. It’s an excellent new rung on the ladder of IMSA series,” IMSA President John Doonan said. “By putting prototypes and GT cars on the track together, we’re allowing competitors to gain valuable experience in multiclass racing. By using a single driver in each car, it permits driver growth in providing important feedback in helping set up the car to their preferences and needs.

“And with a sprint-race format, you know everyone will be racing their hardest from the green flag to the checkered. We cannot wait to see the series debut later this week.”

Twenty-four cars are on the pre-event entry list for Daytona, nine in LMP3 cars also seen in the IMSA WeatherTech SportsCar Championship and 15 in the GSX class featuring the GT4 cars that also can race in the IMSA Michelin Pilot Challenge. There are some familiar driver and team names among the entrants.

In LMP3, Lance Willsey will drive the No. 30 Ligier JS P320 for the same Sean Creech Motorsport team where he will race an LMP3 in the Rolex 24 At Daytona the following week. Past IMSA Prototype Challenge racers Dan Goldburg and Brian Thienes are entered as well, with well-known teams JDC MotorSports and US RaceTronics, respectively. Courtney Crone, the 2023 IMSA Diverse Driver Development Scholarship recipient, who finished sixth in last year’s Prototype Challenge, joins Forty7 Motorsports in the No. 99 Duqueine D08.

The GSX class is just as loaded with known names. Sebastian Carazo will drive a Porsche 718 GT4 RS Clubsport for Kellymoss with Riley, which is fielding entries in both VP Racing Challenge classes. Tim Probert will be in a Murillo Racing Mercedes-AMG GT GT4. Michelin Pilot Challenge regular Frank DePew joins in the Rebel Rock Racing Chevrolet Camaro GT4.R.

Turner Motorsport has expanded its attack with a pair of VP Racing Challenge BMW M4 GT4s. Even Jim Farley, the CEO of Ford Motor Co., is on the entry list for Daytona in the No. 98 Multimatic Motorsports Ford Mustang GT4.