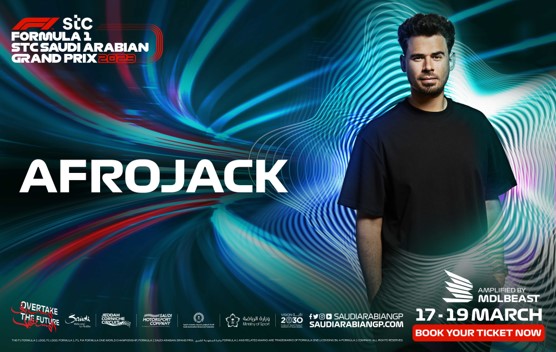 The concert will take place on the Main Stage of the Jeddah Corniche Circuit, F1’s longest and fastest street circuit.

One of the world’s most sought after artists, Afrojack continues to shatter boundaries that push music into bold new directions. Since making his breakthrough with the multi-platinum selling single ‘Take Over Control’, the Dutch-born, genre-bending musician has lent his production skills to tracks including David Guetta’s number one smash ‘Titanium’ feat. Sia).

Indeed, known as a versatile producer and music artist who is able to move effortlessly across genres from electronic music to hip-hop and pop, he is as respected and known for his work producing tracks for other artists as much as he is known for his own music. Just some of the tracks he has helped produce include Beyonce’s Run The World (Girls), Madonna’s Revolver with David Guetta and Ne-Yo and Pitbull’s Give Me Everything.

Afrojack won a Grammy for his 2011 remix of Madonna’s Revolver (David Guetta’s One Love Club Remix) shared with David Guetta for the Best Remixed Recording, Non-Classical. He’s been nominated a total of 4 times for remixing Collide with Leona Lewis; producing Look at Me Now with Chris Brown and producing Give Me Everything with Ne-Yo, Pitbull and Nayer.

Most recently in 2022 he has collaborated with Guetta, Missy Elliott, Doechii, and Bia for the song “Trampoline.” He also released “Worlds on Fire” with R3hab and Au/Ra and also announced his “Jack to the Future” US tour.

Afrojack joins a star studded entertainment line up at the FORMULA 1 STC SAUDI ARABIAN GRAND PRIX 2023 that also includes a live show by hip-hop superstar, Travis Scott, ensuring that fans will be treated to 3 whole days of world-class racing featuring the world’s greatest drivers as well as entertainment from the biggest names in music. Last year’s edition of the FORMULA 1 STC SAUDI ARABIAN GRAND PRIX proved to be one of the races of the season while the post-race entertainment on the Main Stage ensured the adrenaline kept flowing long after the last car returned to the pits.

With Afrojack and Travis Scott confirmed as the major headliners of the weekend, it is clear that the FORMULA 1 STC SAUDI ARABIAN GRAND PRIX 2023 will guarantee three days of non-stop thrills and excitement. It is definitely not to be missed!