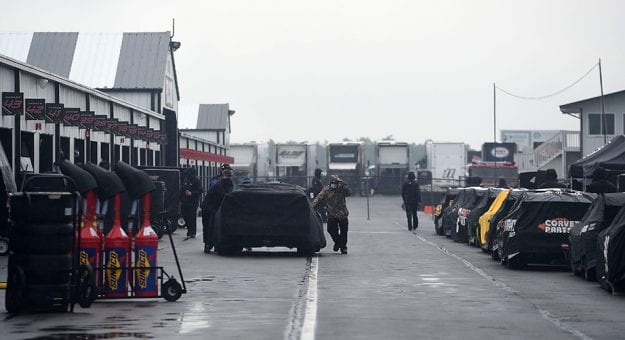 UPDATE The weather finally cleared at Pocono and the Saturday Cup race is underway and the current leader is Martin Truex Jr. with 50 of 130 laps in the books. Joe Gibbs Racing Toyotas run 1-2-3 with Denny Hamlin in 2nd and Kyle Busch in 3rd.

06/27/20 The start of Saturday’s NASCAR Cup Series race at Pocono Raceway has been delayed due to inclement weather and it is raining again at 4:40pm and since Pocono has no lights, we wonder if the race will run today.

Rain fell in Long Pond, Pennsylvania and required track-drying efforts. The green flag for the Pocono Organics 325 in partnership with Rodale Institute was originally scheduled to wave at 3:54 p.m. ET. Coverage continues on FOX, MRN and SiriusXM NASCAR Radio.

Drivers were being called to their cars at 4 p.m. ET with the national anthem at 4:15 p.m. ET and the green flag targeted for approximately 4:35 p.m. ET, but then the rain started to fall again.

06/27/20 Saturday’s scheduled NASCAR Gander RV & Outdoors Truck Series race at Pocono Raceway has been postponed a day due to rain, setting up a scheduled tripleheader Sunday with all three national series at the 2.5-mile triangular track.

Rain washed out the Truck Series race on Saturday. Pocono is the site of the Cup Series first-ever weekend twin bill, with one race on Saturday, one on Sunday. The field for Sunday’s race will be set by inverting the lead-lap finishers from race No. 1.