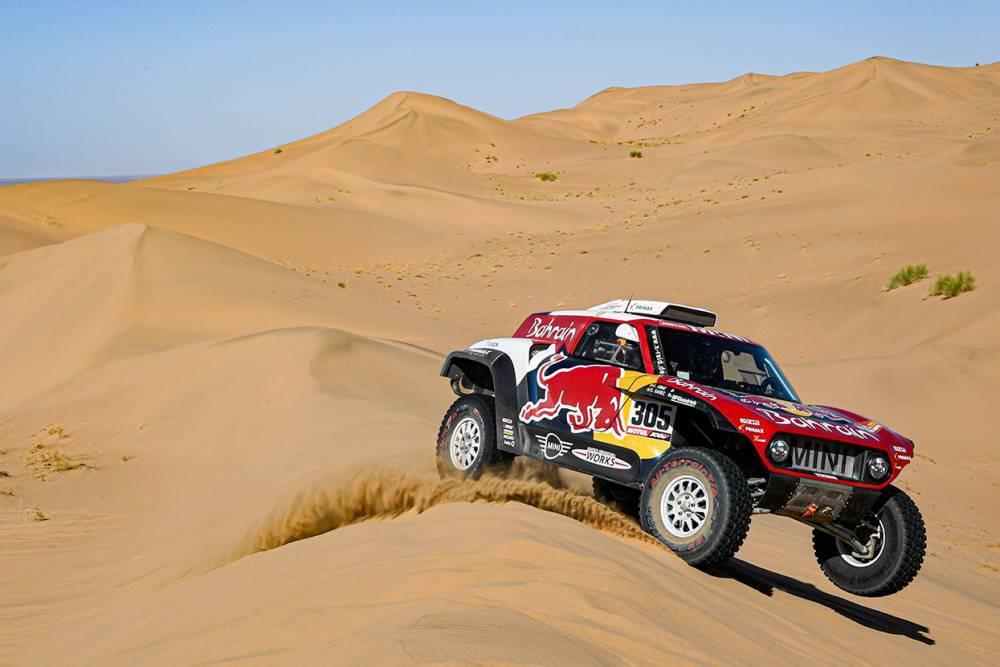 The 2020 Dakar Rally really started to take shape on a wild Stage 5 which was dominated by sandy terrain. Carlos Sainz Sr, Toby Price, Cyril Despres and Dmitry Sotnikov all bagged victories but Sam Sunderland suffered a heavy crash and is out of the race.

Sainz came onto the stage with a 3m3s lead over Toyota rival Al-Attiyah and looked set to drop further time as he lost two-and-a-half-minutes on the opening 30 miles of Thursday's 219-mile Al Ula-Hail test.

But the two-time World Rally champion recovered to take a slender lead at the 155-mile mark and ended up pulling out 2m56s over Al-Attiyah over the remainder of the stage.

It means Sainz now has an overall lead of 5m59s as the rally nears its halfway point.

Stephane Peterhansel lost three minutes in his X-raid Buggy with a puncture and ended up 6m11s adrift of his teammate at the end of the stage.

With the Rest Day in Riyadh now just one day away, we’re witnessing world class off-roaders going full speed at the 42nd edition of the world’s toughest rally.

A second consecutive stage win was achieved by Red Bull Off-Road Team USA on the 353-kilometre special between Al Ula and Ha’il. The coaching crew of Cyril Despres (FRA) and co-driver Mike Horn (SUI) thundered along in their side-by-side OT3 by Overdrive – refreshed from an enforced rest day yesterday while their vehicle underwent repairs.

“Cyril’s driving was fluid all the way. Taking the perfect headings always and that’s what saved us the time. That’s two stage wins for the team, let’s get some more!" – Mike Horn

It’s testament to the ultra-resilient mentality of both Despres and Horn that they were able to battle back from adversity to park on the top step of today’s podium. The result makes Despres the first ever Dakar competitor to win stages in the three different categories (bike, car and now SxS).

Despres and Horn are now competing in the Dakar Experience class, alongside team-mate Blade Hildebrand (USA). Hildebrand also enjoyed his best day behind the wheel of an OT3 as he set the sixth fastest time on the stage. The third OT3, driven by Mitch Guthrie Jr. (USA) – winner of Stage 4 – maintained sixth place in the overall SxS classification despite being handed the tricky task of opening the road.

Sergei Kariakin (RUS) is the new leader of the SxS contest, but the margins are tight. Third place Chaleco Lopez (CHI) is less than two minutes away from the former Dakar quad race winner.

Overnight leader of the car class, Carlos Sainz (ESP), extended his advantage by scorching over the dunes on Stage 5. The Spaniard’s second stage win of the 2020 Dakar moves him six minutes clear of Nasser Al-Attiyah (QAT) who remains his closest competitor.

“We’re all pushing hard and doing a good job so far. The car is working well." – Carlos Sainz

Third on the stage and staying third overall is Stéphane Peterhansel (FRA). The 13-time Dakar winner managed to keep himself in contention despite being tasked with opening the stage, alongside his stand in co-driver Paulo Fiuza (PRT). Peterhansel is now 18 minutes back from fellow Mini Buggy driver Sainz.

Here is all you need to know:

[adinserter name="GOOGLE AD"]- Spaniard Carlos Sainz continued to stamp his authority on the car race by winning his second stage in Saudi Arabia. The win moves the 2010 and 2018 champion six minutes clear of Nasser Al-Attiyah who remains his closest competitor. Stephane Peterhansel opened the stage and came home third to remain in contention, 18 minutes back.

– “Sainz said: “The last part was fast and bumpy. We managed to catch Nasser (Al-Attiyah) in this section. We finished the stage together. We’re all pushing hard and doing a good job so far. The car is working well."

– Toby Price also claimed a second stage win after an immaculate run on Stage 5. The two-time Dakar winner has sprung up the leaderboard to second and now trails leader Ricky Brabec by nine minutes.

– Price said: “The first part of it was stones and rocks again, but towards the end we were in the sand dunes. This made the navigation tricky. I got caught out by one square edge that kicked me off. Luckily I was able to get back on and I’m looking to stay healthy for the rest of the race."

– Red Bull KTM Factory Team rider and 2017 champion Sam Sunderland crashed out of the race 187km into the timed special, suffering back and shoulder injuries. His teammates Matthias Walkner and Luciano Benavides fired up the rankings though to end the day sixth and eighth respectively.

From the great rocks of Tabuk to the sandy plains of Ha’il. Today’s agenda provided the riders with a fifth stage filled with rocky paths and boulders on both fast track and sandy off-road with plenty of camel grass to tackle. This led to the formation of a large group of riders who rode bunched together from the refuelling to the end of the special. The trek covered some 353 kilometers against the clock – 100 less than yesterday – and took the competitors from Al Ula to the new bivouac situated in the northeast of the country. The dunes, which were present only in the distant landscape, are highly likely to be the main protagonists over the coming days.

After starting out among the first positions, the team riders set about minimizing the time that their pursuers were intent on clawing back from them. Ricky Brabec staged a mission to maintain his place at the head of the overall leader board. The American rider, finishing in fourth place on the day, was thus able to keep the day’s winner Price within a three minute distance. Brabec holds top spot in the general rankings with a nine-and-a-half minute advantage over the nearest second place rival.

“It was a big change in terrain today. The first part of it was stones and rocks again, but towards the end we were in the sand dunes. This made the navigation tricky." – Toby Price

The news was much less positive for Sam Sunderland (GBR), the fourth member of the Red Bull KTM Factory Team. The 2017 Dakar winner crashed out of the race 187 kilometers into the timed special stage while setting the day’s second quickest time. We wish Sam a speedy recovery from the back and shoulder injuries he has sustained.

Mohammed Balooshi (UAE) is still in the hunt to improve on his 25th place finish at last year’s Dakar. However, his task was not made any easier today when he ran out of fuel 25 kilometers from the end of the stage. Thankfully another competitor was able to lend him some gas – the spirit of the Dakar is still going strong in Saudi Arabia! Balooshi is placed alongside CS Santosh (IND) in the Top 50 of the bike race with both targeting a move up the leaderboard in the second week.

“A really tough day and I’m glad to make it to the finish. I’m finally starting to feel like I’m getting in the groove at this rally." – CS Santosh

With the halfway point of the Dakar almost in sight, Team Kamaz Master are flexing their muscles at the front of the truck race. A second consecutive 1-2-3 stage result has given the Russian truckers a vice-like grip on the general classification. Stage winner Dmitry Sotnikov (RUS) was followed home by race leader Andrey Karginov (RUS), with team-mate Anton Shibalov (RUS) joining them on the podium.

“During the stage we had a puncture but we made the decision not to stop and change the wheel. We used the air pressure system we have in the cab to save some time." – Andrey Karginov

A near faultless opening week at the first Middle Eastern Dakar continues for Ignacio Casale (CHI) in the quad class. The Chilean is chasing his third Dakar quad title, and now has an advantage of more than half an hour in his category.

“Today is when the real Dakar started. There will be really tough stages and I’ll have to be ready for them physically." – Ignacio Casale

Tomorrow takes the Dakar convoy to Riyadh. For those competitors managing to cross a further 477-kilometre stretch of dunes there will be a well-earned Rest Day waiting for them in Saudi Arabia’s capital city.