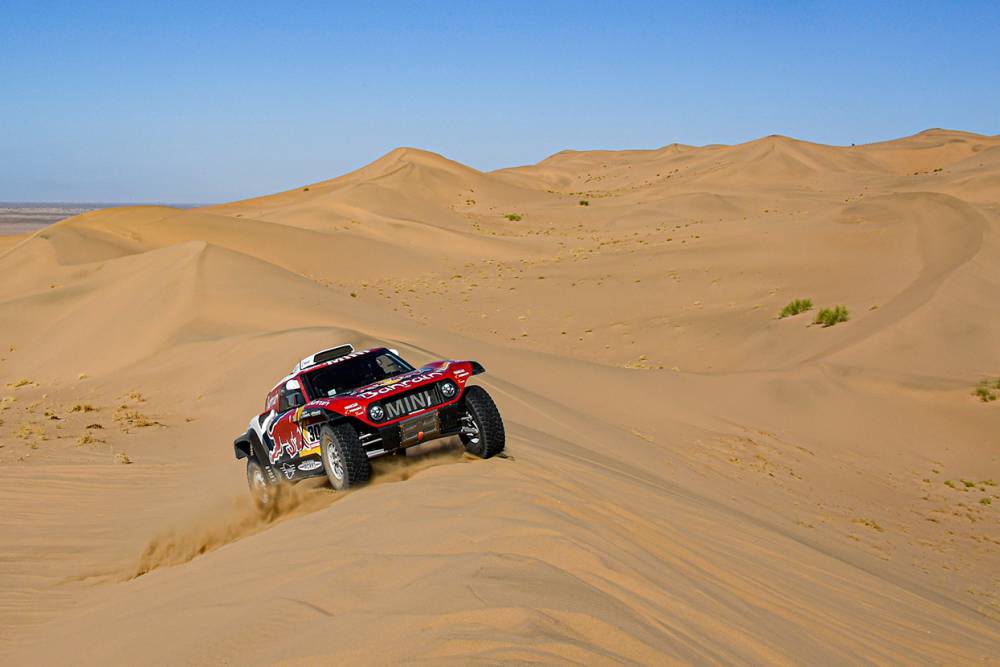 Wednesday's Neom – Al-'Ula stage included the marathon's longest timed test so far at 281 miles, which was split by an 80km neutralized zone, and was completed by Peterhansel in just over four hours.

The 13-time Dakar champion was sixth in the starting order, but his X-raid Mini buggy was the third car to arrive at the finish line and he clocked the fastest time at all but the first checkpoint.

Further down the rankings, Toyota Gazoo Racing's Fernando Alonso showed none of the speed and bravery of the previous stage, with his pace fizzling out midway through this stage. He was to later finish Day Four some 26 minutes adrift of the stage winner, and thus dropping him to 16th overall on the general classification.

Peterhansel slowed his charge in the final kilometers to conserve his car, while Al Attiyah and Sainz threw caution to the wind in a bid to catch the Frenchman. However, it was too little too late: Peterhansel claimed his first stage victory in 2020 by nearly two-and-a-half minutes from Al Attiyah and with Sainz some five minutes further back.

This means Sainz still holds the overall lead of the Cars category, but that leads been squashed to only 03min 03sec – and, tantalizingly, had Al Attiyah not incurred that three-minute time penalty on Day Three, he would be only three seconds behind the Dakar Rally's leader.

Stage four of the 2020 Dakar Rally saw the Monster Energy Honda Team components arrive at the final destination at the Al Ula bivouac, very well-positioned in the race. ‘Nacho’ Cornejo finished the race in first position, followed home by Benavides and Brabec. The American remains leader ahead of his team-mates.

The red livery of the Monster Energy Honda Team’s Honda CRF450 RALLYs was once again on victory parade today as the 2020 Dakar Rally arrives at day four. On the agenda, once more, was fast track which alternated between sandy and rocky sections.

Yesterday’s stage winner, American rider and current race leader Ricky Brabec, was the first to start out this morning, but despite the handicap of having to open without references ahead, was able, nevertheless, to set an infernal pace. Behind him, Nacho Cornejo was likewise putting pedal to the metal, not only maintaining his team-mate’s pace, but even managing to outstrip the Californian in the latter stretches. The Chilean, claimed his maiden special stage victory, after first place finisher Sam Sunderland was penalized. Cornejo holds third place overall.

Cornejo: "I’m very happy with the stage victory. The truth is that I wasn’t expecting it with Sam’s penalization. I’m really pleased to have achieved my first Dakar stage win. Today was a very long stage, very demanding physically and above all mentally. The first part was very fast where there was practically no time difference between the riders. From the first refuelling, difficult navigation areas began with poorly visible tracks and many tracks on either side. It was quite difficult until I have caught Ricky approximately at kilometer 220 and we helped each other to open the track until the second refuelling. It was a difficult stage where we went through some very beautiful places. I’m very happy with this stage in which we kept a cool head to be able to find the route more easily."

Second on the day was Kevin Benavides, another rider in the frenetic battle for the stage triumph, who finished 35 seconds adrift of the stage winner. The Argentinean lies second in the general rankings. Behind him finished Monster Energy Honda Team stable-mate Brabec, who concluded the stage with a three-minute deficit from the Chilean stage winner. The Californian, nevertheless, continues to command at the head of the overall race standings with a 2’3" advantage over Benavides.

Not the best day at the office for Joan Barreda. Joan, starting from a favorable position, was victim of a fall, inflicting more damage to the rider, physically, and also to the machine navigation system. The Spaniard, who hails from Castellon, was able to make it back to the bivouac at Al Ula. Barreda is now seventh in the overall standings and is still maintaining his chances in the race.

Tomorrow, for the fifth stage, riders will once again be issued with the roadbooks 25 minutes before the start of the race. The race heads out from Al Ula, East-bound for Ha’il.