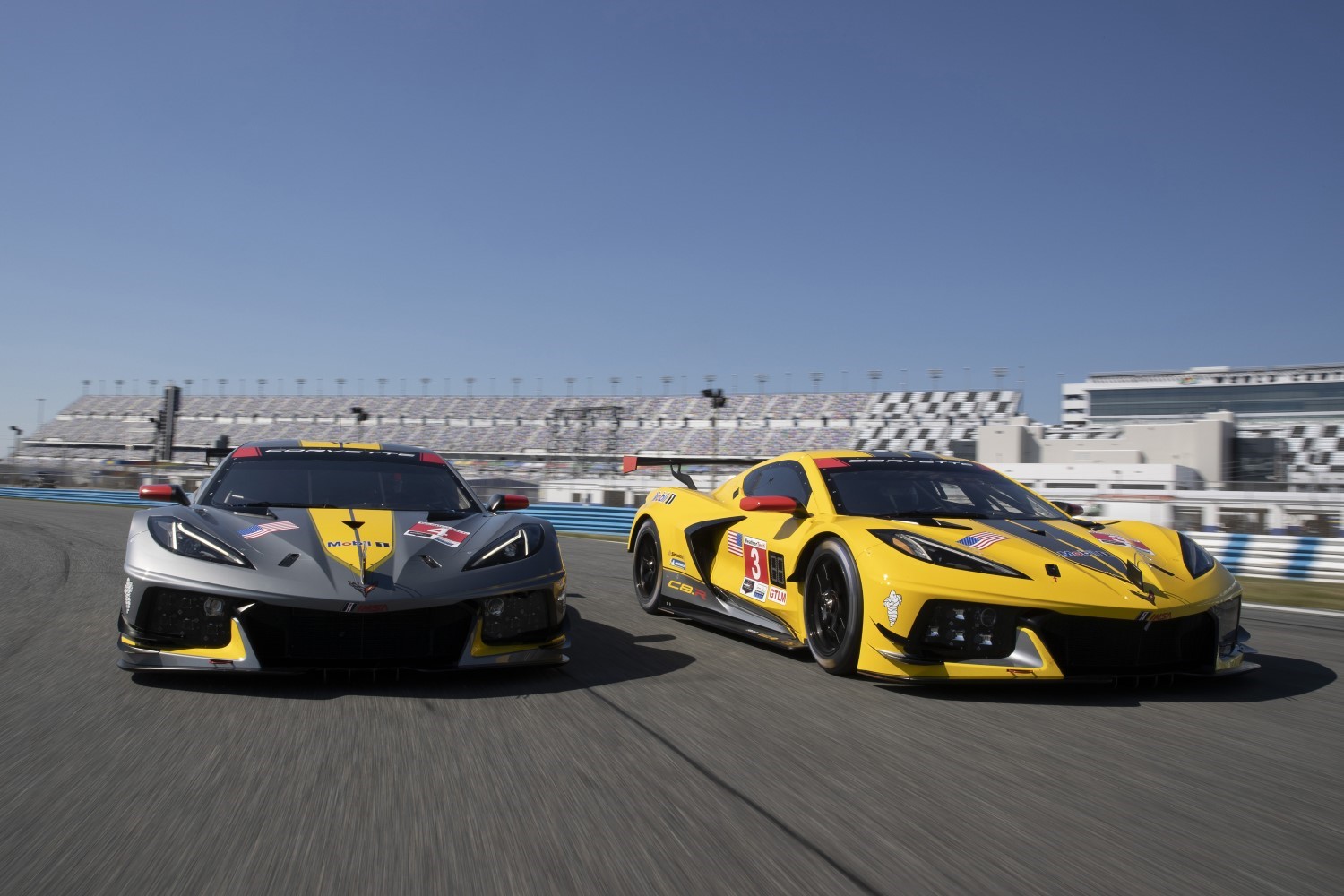 DETROIT (Dec. 30, 2019) – Corvette Racing returns to the racetrack for another season of IMSA competition, but this time in a very different guise than past years. This weekend’s Roar Before the 24 marks the first public running of the Chevrolet Corvette C8.R, which Corvette Racing will field for this year’s WeatherTech SportsCar Championship.

The 2020 season will be Corvette Racing’s 22nd of production-based sports car competition but its first with a mid-engine Corvette. The ground-breaking C8.R made its public debut in October and will race for the first time in next month’s Rolex 24 At Daytona to begin in the IMSA GT Le Mans (GTLM) Championship.

This weekend’s Roar gives teams more than seven hours of track time around Daytona International Speedway’s 3.56-mile, eight-turn road course. The goal for Corvette Racing is for its six drivers to gain enough track time to test the reliability of the new racing Corvette and explore a number of different setup options for the Rolex 24.

The C8.R is based on the strong foundation of the 2020 Corvette Stingray with both developed simultaneously. There is a deeper level of technology transfer between the race car and production Corvette than ever before, which helps contribute to many of its advancements. As a result, the C8.R shares the highest percentage of parts between the production and race car than any previous generation.

The Corvette C8.R is the fifth racing version that Corvette Racing has fielded since its first season in 1999. Corvette Racing’s record since its debut at the 1999 Rolex 24 is unmatched – 107 victories, 13 IMSA Team Championships, and 12 Manufacturer and Driver titles.

Initial design and development on the Corvette C8.R – with Corvette Racing engineers working alongside Corvette production personnel – began more than five years ago with track testing starting within the last 18 months. Heavy emphasis on wind tunnel and simulation aided in the testing program with that work culminating in a two-day November test at Daytona that gave Corvette Racing a final checklist for items ahead of the Roar and the Rolex.

Corvette Racing will test from Friday through Sunday at the Roar Before the 24. Live timing and scoring will be available at IMSA.com.

ANTONIO GARCIA, NO. 3 MOBIL 1/SiriusXM CHEVROLET CORVETTE C8.R: “There is a lot to discover and develop. Usually your starting point is better than what you previously had. But this is completely different. We are still in the early stages with this new Corvette. There will be big steps for sure. I don’t know when we will get to the point where we will start making little steps. We need to run this car and we need to race it to find out where we are against our competition. We are concentrating on our own work. Whenever it becomes race time, we will know where we actually are."

JORDAN TAYLOR, NO. 3 MOBIL 1/SiriusXM CHEVROLET CORVETTE C8.R: “As many miles you can put on the car is optimal. The C8.R is obviously still very new, so reliability is always the first question. The Corvette Racing guys have done an unbelievable job designing and developing it. Pace will come eventually, but it already feels like a very solid and competitive car. As many laps as we can get at the Roar and going through the program, getting all the drivers on the same page from a setup point of view and then the little things like pit stops and driver changes will be different than what we’ve had in the past. The car is a little more tricky to get in and out. Understanding that muscle memory of the process of getting in and out, where the seatbelts go, where the drinks bottle is, where the air hose goes… those little details that we haven’t refined that were refined with the C7.R are things that will show up in a 24-hour event, so those are things we will need to check off the list at the Roar."

NICKY CATSBURG, NO. 3 MOBIL 1/SiriusXM CHEVROLET CORVETTE C8.R: "I can’t wait for the Roar and to be there with Corvette Racing. It will be my first time in the Corvette C8.R and I honestly can’t wait to do my first laps in it. The experience in the Chevrolet Simulator provided valuable insight into what I can expect with the C8.R. That should help with the getting used to the car on the track. For me, it's a brand new car, a new team and two new teammates. But it will be a great challenge, and I'm really looking forward to it."

OLIVER GAVIN, NO. 4 MOBIL 1/SiriusXM CHEVROLET CORVETTE C8.R: “The team is going to have a very structured plan. And that’s one of the things that’s so good about Corvette Racing. We plan our time and fundamentally understand what all we have to work through and the list of things we need to achieve. The third drivers will need time in the car. We’ll all have to work through that program and procedure as best we can. Certainly we’ll learn a huge amount every time we go on track just with how certain tires work, how the braking package works, the aero setup, weight placement… all kinds of different thoughts that the team will look to work through. We know that of that list of 50 things we want to try and achieve, the chances are that if we can come away with 60 or 70 percent of that done, it’s a pretty big win."

TOMMY MILNER, NO. 4 MOBIL 1/SiriusXM CHEVROLET CORVETTE C8.R: “The development on the Corvette C8.R, compared to previous generations, in a lot of ways is the same process. You go through the normal procedures of testing new things, except in this case everything is new. It’s been a lot of fun going through the process of something new, trying to understand how things work and helping the engineers understand all these new parts and pieces. There are some aspects where we have no input but others where we have a great deal. It’s exciting having raced C7.R for its full generation and now to start something new. I’m excited for what this car has to offer and see how it races."

MARCEL FASSLER, NO. 4 MOBIL 1/SiriusXM CHEVROLET CORVETTE C8.R: “It makes me super happy to be back for another year with Corvette Racing and to start at Daytona. I’m looking forward to my very first time in the new Corvette C8.R. When I was a child, I remember how exciting it was to open my first Christmas present. That’s what this is like! The C8.R is a really fantastic looking car with a promising competitive look. I’m proud to be a part of this team and honored to team again with Olly, Tommy and everyone at Corvette Racing.