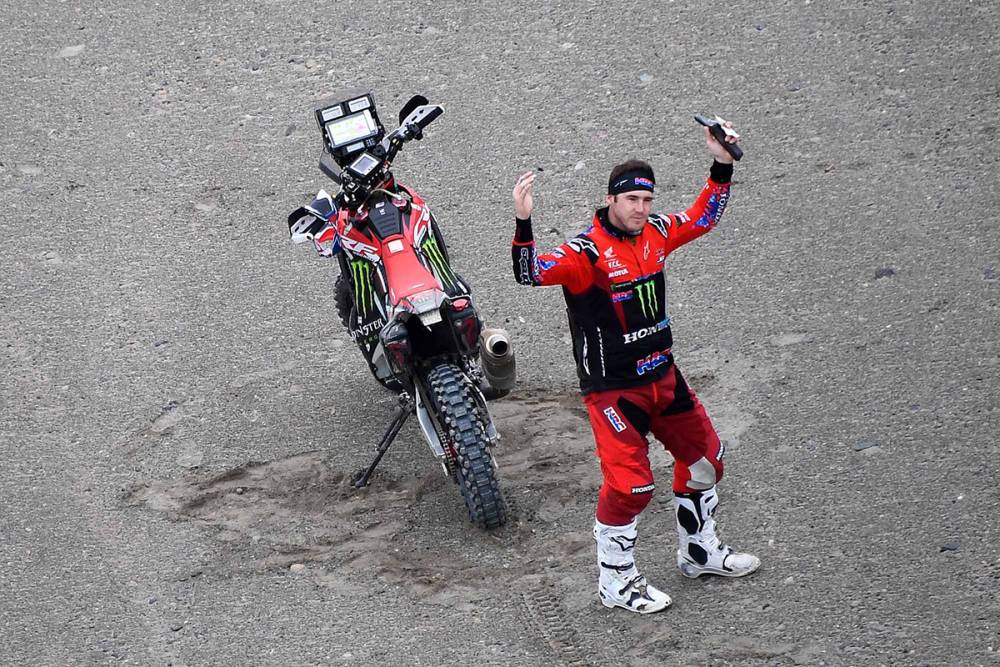 Ricky Brabec (Mira Loma, California) proved himself to be one of the clear favorites in the most recent edition of the Dakar Rally. The rider could have even grabbed the final glory had it not been for a mechanical setback. From the Californian desert, this budding star of the Monster Energy Honda is, once again, poised to shine in the most important race of the year.

How are you feeling physically and how are the preparations for the next Dakar going? What are you expecting from it?
Physically, I feel really good. Mentally, I’m still working on it. I had a tough break in the 2019 Dakar and it was pretty hard getting back in the saddle and pushing for victory after that one. There’s a lot of emotions and mixed feelings. But unfortunately what is done is done. So now we have to push and hopefully gain the confidence and the speed back as we head into the Dakar 2020 with more confidence and hopefully with a bit more speed. We will keep the fight alive and show up in Saudi Arabia Dakar ready for a full-on fight.

[adinserter name="GOOGLE AD"]Last Dakar you took a huge step and you were leading the rally up until a few days from the finish. In the next Dakar you will be one of the favorites for the victory.
Being one of the favorites is cool, but there’s a lot of people that think that if they are favorite, they’ll have a lot of ‘water-boys’ supporting them, but for me, coming from America, we do things a lot differently. I’m not expecting other riders to ride for me and I’m not going to ride for other riders. We are all in the race together. We are all trying to win. But in the end, when one of our team-mates wins, yeah, that guy won, but the whole team also wins. I’m really big at being a fair player. For me I will do the best I can at the Dakar. Hopefully I can come out on top and make all my friends and family proud.

Is it better to start the race as one of the favorites or one of those in the background?
To start as a favorite I think you might have a lot of weight on your shoulders because everyone is watching you. But I prefer to start as an underdog and then come in and show people ‘Hey! Here I am.’
There’s about fifteen riders who could win the rally, so it’s not easy and we are not going very slow. Every day anything can happen and everything changes. The idea is to put in a really good first stage and start the rally on a good note. Hopefully the organization plays it safe. It’s rally. Everything changes. Every kilometer. What really matters is who crosses the line first.

The rally will change this year as they will give you the roadbook in the morning. You’ve already experienced this in Morocco. How will the race change with this rule?
We will get pre-painted road books. On four or six days we will get the roadbook in the morning. It definitely slows the rally down and makes the riders think a bit more. We won’t just look down and see the colors as usual and know what we are going to do. It’ll be more equal. You don’t want to be really far up front or really far back, you always want to be conservative and consistent and right in the middle: if you start at the front, then you are going to be the first one opening with a roadbook that nobody has seen. That can cause a lot of lost time. You want to finish fifth to tenth everyday, that will make you do really well: you won’t lose a lot of time, but you won’t gain a lot of time. You’ll always be in the fight. So you come in on the last day and attack. I’m training with the new roadbook at my house as best I can. Hopefully I can come into the Dakar with a lot of experience of the new roadbook and be more comfortable when I get there.

Saudi Arabia is a new country, so for this year all the riders arrive under the same conditions.
We’re going to a different country, to Saudi Arabia, so no-one is familiar with the country and no-one has any insight into the route. We’re all going in pretty equal, not knowing what the heck is going on. It’s going be fairer. You know, it’s not going to be like, ‘Hey I know a guy that says that here is like this or whatever.’ We are all going in basically blind. We’re all going to go in not knowing what each day is going to be like. We go to Peru, we go to Argentina, we go to Bolivia, we go to Morocco, we go to Dubai and we can go to Chile and we already know what each day is going to be like by looking where we’re going or by what they’re telling us. This time we are going to Saudi Arabia where we haven’t raced before. The new generation hasn’t raced there. So we are going to start not knowing anything. They are going to tell us what the stage is like and that’s all we are going to know. So it’s going to be fairer. All the riders get the same roadbook, at the same time of the day. I think the rally is going to come down to not just speed, but being smart and being collective.

Could this be good for you?
Hopefully. We’ll see at the end of the Dakar.

You are an American and you live in California. If you go back to when you first went to dirt races or desert races, did you ever imagine that one day you would be leading the Dakar Rally, the toughest race in the world?
I would have done a lot of things differently had I known I would be where I am at today. I probably would have paid attention better in math class at school. I would probably have fewer tattoos… I probably wouldn’t have grown up as a punk kid… I don’t know. I never thought that I’d be leading the Dakar, but in 2019 I was doing that, and I believe that there’s a little fight left in me to do it for 2020.

Out of a Rally bike… Your normal training is with a bicycle?
I ride a bicycle, I ride a mountain bike, I do some downhill… I go to the gym, some motocross track. Hiking… I do a lot of things because I hate to sit still and I hate to sit inside and I hate to watch TV. So I try to do something whether it’s playing in the truck or riding trails, riding Enduro, mountain biking, going to the downhill mountain bike park to go jumping with the bicycle, hiking with friends, camping…

Is there any race similar to the terrain that you are used to?
The terrain near my house is like Morocco. Really rough and really dry. We have many dunes near my home where I do my training and the Baja 1000 is very close to my house. It’s exactly like Morocco. Hopefully it will be like Saudi Arabia, so I will feel comfortable.