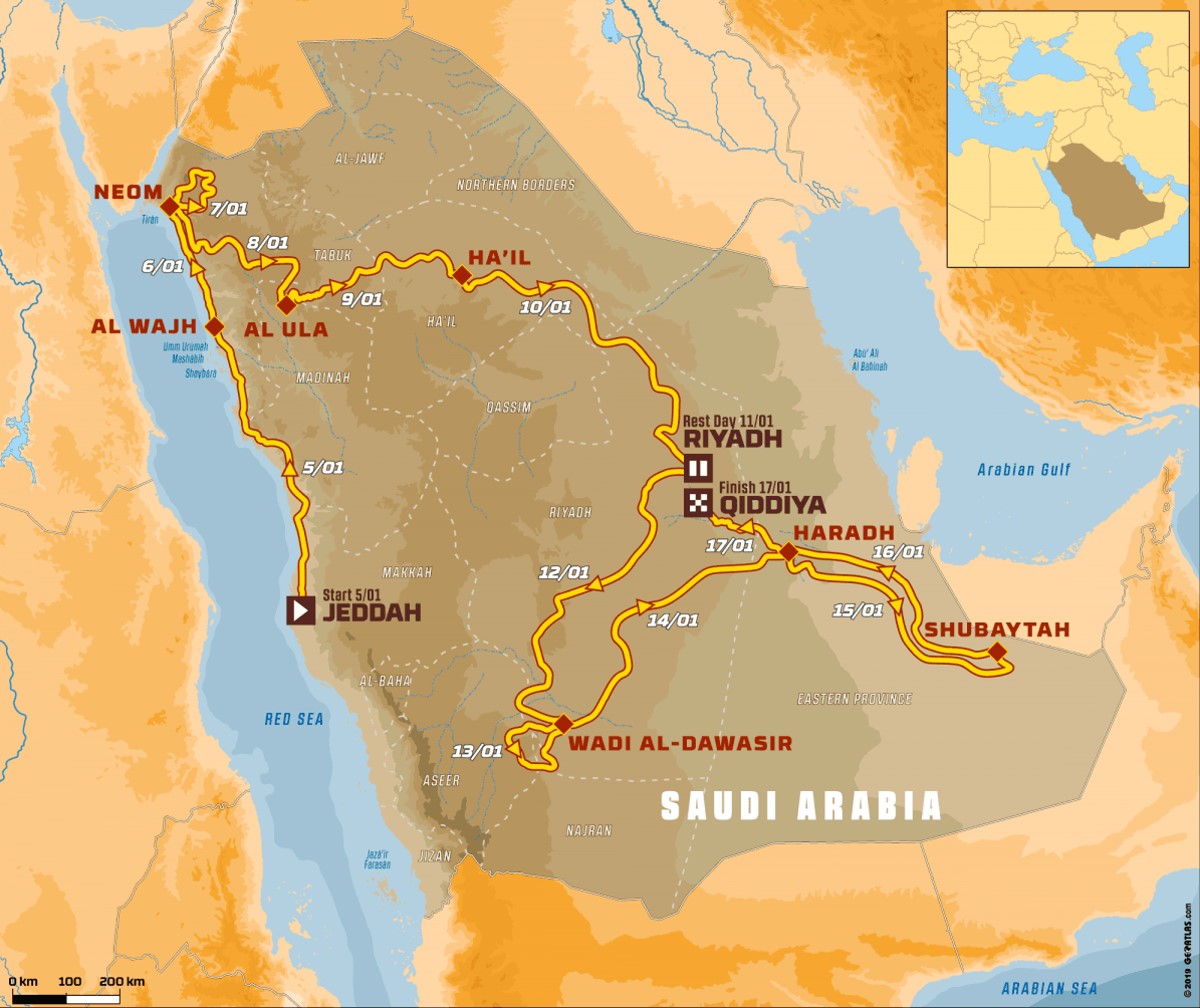 The route of the first edition of the Dakar in Saudi Arabia explores the vast expanses of the largest country in the Middle East. The drivers and crews will be facing a total of 7,500 km, including 5,000 km of specials, five of them longer than 450 km. In a country where the desert is king, 75% of the rally will be over sand… all types of sand.

2 TO 5 JANUARY: SCRUTINEERING AND START

Home to 3.5 million people, the second-largest city in the country is also its economic heart thanks to its commercial port on the Red Sea, which goes back to the 7th century. Just for once, the gateway to the holy cities of Mecca and Medina will also be a launch pad for the drivers, riders and crews of the Dakar. King Fahd’s Fountain, which ejects water at a speed of 375 km/h, and Jeddah Tower, which will soon reach a height of 1,001 m, will inspire the competitors with grandiose ideas and a burning ambition.

The Dakar will be the first world-class sporting event held in Qiddiya, a city whose foundation stone was laid in 2017 and which will be the country’s capital of entertainment, sports and the arts. The vast complex, located about 40 kilometers from Riyadh, will include attractions such as a theme and amusement park, world-class sports facilities and multidisciplinary art centers. It is set to open to the public in 2023.

Saudi Arabia stretches over more than two million square kilometers —about four times the surface area of France. The largest country in the Middle East, whose population is concentrated in the towns and cities close to the sea, boasts a mosaic of landscapes that will put Dakar competitors through their paces on all fronts: driving and riding, navigation and endurance. It is a call to adventure.

to explore the contrasts

The available spaces offer the opportunity to take competitors on a real tour of Saudi Arabia, with each stage having its own specific landscape and idiosyncrasies. A wide range of landscapes will color the rally, including canyons, dunes, mountains, wadis and more. It is a delight for the senses… and an ordeal for bodies and vehicles..

Close to the border with Jordan, mountain climbers can crown Jabal el Lawz —the Mountain of Almonds—, peaking at over 2,500 meters above sea level. For Dakar competitors, however, this vast mountain region that extends all the way to Ha’il Region will be more of a maze. Top navigators will be able to make the difference by staying on course as they zigzag their way through the valleys.

sand as far as the eye can see

In the far south of the country, almost a quarter of the country remains unsettled except for a handful of villages and oases. This immense and pristine area gives rally raid lovers a lot to work with. Even expert dune surfers will be put through the wringer with dunes over 250 meters high, while lesser drivers and riders are in for a very bad time.

Given the size and nature of the Saudi landscape, in 2020 the Dakar returns to its extreme roots in terms of endurance, with 5 specials which cover more than 450 kms out of 12. To rise to this challenge, a series of measures aim to level the playing field between professional teams and amateurs. Sporting equity in favor of strategy and race management is the heart of rally raid.

The road book: now in color

According to an intuitive and widely shared code, the symbols in the road book boxes will be printed in color. This will significantly reduce preparatory work for the following stage, especially for amateur drivers joining the bivouac late, enabling them to focus more on the recovery and maintenance of their vehicles. For at least four stages, the road book will be distributed in the morning at the start of the special stage: the closest thing to absolute equality.

Like bikes and quads that already feature a 15-minute break at fuel stops during a special stage, a stop point must now be respected by all categories. This break time is useful in two ways in terms of safety: it imposes time to rest and refocus and also reduces the number of overtakes between UTVs and cars for example.

Only 10 minutes of mechanical repair time will be permitted for bikes and quads upon arrival at the Neom bivouac! Strategy and race management issues, particularly tire wear, will be even trickier than usual. Another more conventional marathon stage, with assistance only authorized between competitors, will be organized in Shubaytah.

If forced to retire (except for medical reasons), a crew or a driver may be allowed to resume the race by participating in a separate ranking called “Dakar Experience" for the rest of the rally. This second chance will allow unlucky amateurs to keep learning and return with more cards up their sleeve to complete the rally in the future. Competitors on the Elite List are excluded.

In accordance with FIA regulations, there will be a single T3 category for lightweight buggies (< 900 kg) with an engine size less than 1,000 cc. They will be divided into two classes: T3.S (in production) limited to 120 km/h and T3.P (prototypes) limited to 130 km/h, all equipped with a restrictor to even the playing field in terms of performance..

Category T4.3 support trucks will be required to rejoin the special stage route at the point where they left it if they have gone off course to provide assistance. Assistance cannot be given to a vehicle that has not completed the entire route