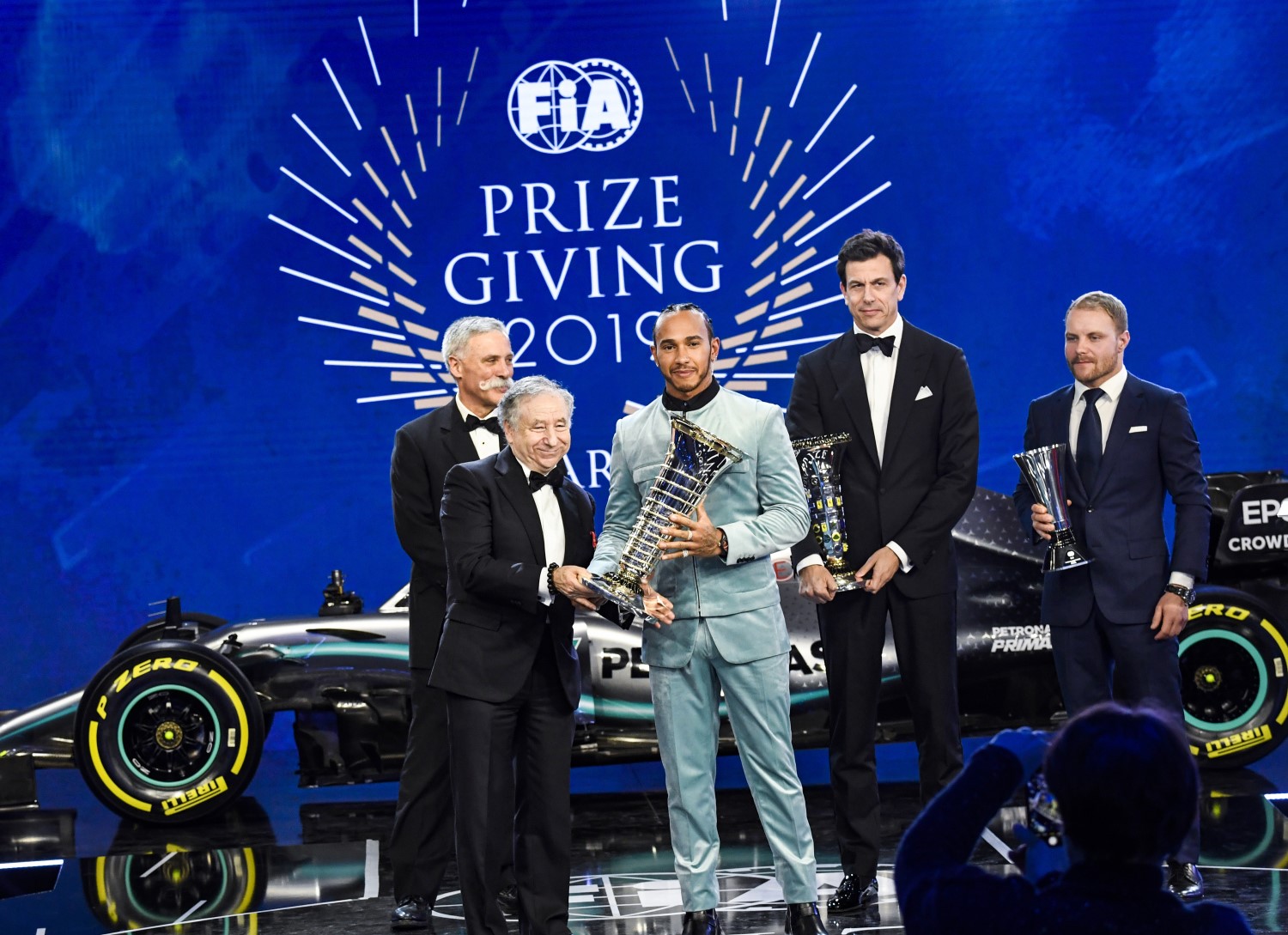 The 2019 racing season concluded on Friday evening at the Carrousel du Louvre in Paris, France with the annual FIA Prize Giving Gala, where the champions from a number of major international motorsport categories were officially crowned by receiving their FIA trophies. The Mercedes team cleaned with Toto Wolff, Lewis Hamilton and Valtteri Bottas all awarded trophies – Toto on behalf of the team, Lewis and Valtteri for finishing first and second, respectively, in this year's Formula One season.

It was a special season for Mercedes-AMG Petronas Motorsport as the team wrote Formula One history by winning a sixth consecutive Championship double – something no other team has done before in the 70-year-long history of the sport. In 2019, the team scored 15 victories, 10 pole positions and 739 points.

"This season has been very challenging," said Toto. "We had to raise the bar once again and achieved some remarkable results. I'm incredibly proud and honoured to receive this trophy on behalf of everyone in Brackley, Brixworth and Stuttgart. Everyone within this team knows how much hard work, dedication and skill it takes to perform all year long at this level. This trophy is the result of that passion and dedication.

"Congratulations to all those who received awards at this year's FIA Prize Giving Gala. This event is a great way to bring the motorsport family together, celebrating everyone's achievements."

The winners of the other categories, bar Formula 1, were awarded with stunning new-for-2019 trophies, designed by renowned American painter, sculptor and printmaker Frank Stella.

[adinserter name="GOOGLE AD"]In rallying, Ott Tanak and his co-driver Martin Jarveoja have put Estonia on the map, ending French domination in the sport’s top category – the FIA World Rally Championship – that had lasted since 2003.

Tanak said: “When you’ve been targeting something like this for a long, long time, and then you actually achieve it, you feel a kind of relief. In the beginning, it was a dream, and for the last couple of years we’ve been close, but for different reasons, we’ve not managed to be the winners. Now that we’ve finally done it, it feels like I’ve lost a weight from my shoulders. It’s not been the easiest journey, I’ve been quite literally through the water and fire, but to achieve the title after all these battles, it tastes even better." On the manufacturers’ side, Hyundai Motorsport finally clinched the crown, having finished second in the two previous seasons.

In what was the FIA World Endurance Championship’s first Super Season held across two calendar years, 2018 – 2019, Toyota won both the Driver and Team competitions. Endurance racing rookie Fernando Alonso teamed up with sports cars stalwarts Sébastien Buemi and Kazuki Nakajima to win five out of eight races, including not one but two editions of the legendary 24 Hours of Le Mans.

“I remember every lap of this championship, which was strange as it lasted one year and a half!" said Alonso. “In 2018 I was combining two World Championships – F1 and Endurance – which was very intense, but I loved the experience. Every World Championship is unique, and it’s nice to sit here as World Champion again. My first Prize Giving was in 1996 when I came with an FIA Karting World Championship, and now 23 years later, I’m sitting here with the FIA World Endurance Championship. It’s been a long career but, as long as you love what you do and you are performing at your best level, it doesn’t matter which category you are here for. The spirit and atmosphere you find in endurance racing is quite special – the friendship you have with your team-mates in both cars – all this is unique and you can’t compare with the experiences I had before."

The series’ LM GTE category also provided fans with a wealth of excitement during the Super Season, stemming from a healthy grid replete with dozens of entries. Winners of the LM GTE drivers’ championship were Kevin Estre and Michael Christensen of Porsche, who claimed their crown with victories at Le Mans and in Fuji.

New team and driver entrants, and the increasingly competitive field, made for a far from an easy ride in the 2018/19 ABB FIA Formula E season. That didn’t stop Jean-Eric Vergne from taking three race victories, winning the championship and becoming the first back-to-back title-winner in the history of the championship. Together with teammate Andre Lotterer, Vergne helped the DS Techeetah outfit to clinch their maiden victory in the Teams’ Championship in a giant-killing fashion.

“I’m really pleased to have done it again," said the Frenchman. “It wasn’t an easy season, but here we are – I would say, in a way this championship was harder than the first, because I think there were four races in a row where I didn’t score any points, with no-one around me believing that I could do it, and I even lost belief in myself. But that’s really what I’ve learned from this season is to never lose hope and to find the strength inside you to turn things around. Now that Formula E will become an FIA World Championship from season seven, I will have to come back to the prize giving then so I can be a World Champion!"

In what has been the closest season in the World Rallycross Championship’s history, the drivers’ title fight came down to a gripping finale after which Sweden’s Timmy Hansen was crowned World Champion.

“I had the perfect ending to an incredible season," said Hansen. “The feeling of winning the title is actually quite different to what I’d dreamed of – I was extremely focused on my own job but looking at it now it was a crazy finale to the season and you couldn’t have written it better if it was a movie! I’m really proud of the top parts of my season, but I’m also really motivated to work on the parts where I can improve. I feel really blessed to have achieved this as a family – it’s as important as the title to me."

The winning drivers, co-drivers and teams from the FIA Rally Championships were also awarded for their incredible achievements in some of the toughest and most varied conditions on tarmac, gravel or in the desert dunes across all the continents.

New to the family this year was the FIA Motorsport Games, an interdisciplinary event with a national focus in which drivers represent their countries, fighting for medals that contribute to overall medal standings determining the winning National Sporting Authority. On this occasion, it was Russia, with a gold medal in the Touring Car Cup won by Klim Gavrilov, two bronzes in the Karting Slalom Cup won by Olesya Vashchuk and Vladislav Bushuev, and the Drifting Cup won by Ilia Federov.

The FIA’s stars of the future were also honored in Paris, with champions from across the motor sport spectrum collecting their trophies.

A number of special FIA awards were also handed out. First, the FIA Special Award was given to Violetta Bulc for her commitment to her role of European Commissioner for Transport, and her ongoing work to improve road safety and mobility for all users.

The Rookie of the Year prize, voted for by members of the FIA Drivers’ Commission, was won by F1 driver Alexander Albon, who started the season with Scuderia Toro Rosso before impressing on his promotion to Red Bull Racing. The British-born Thai finished eighth in the drivers’ standings in his debut season, following an impressive performance at almost every race.

The Personality of the Year award, voted for by permanently accredited media from the FIA’s major championship, was awarded posthumously to Niki Lauda, the three-time F1 world champion and executive director of the Mercedes F1 team.

The Action of the Year prize, voted for by fans of motor sport via the FIA’s online channels, was presented to F1 start Max Verstappen, who was honored for his spectacular battle with Charles Leclerc during the British Grand Prix at Silverstone. The pair raced wheel to wheel, with Leclerc edging Verstappen wide before the Dutch racer came back at him and overtook on the following corner.

The final applause of the year was, of course, fittingly reserved for F1 Champion Hamilton, and with the curtain brought down on another sensational season, preparations are already well underway for what will surely be another great year for motor sport in 2020.