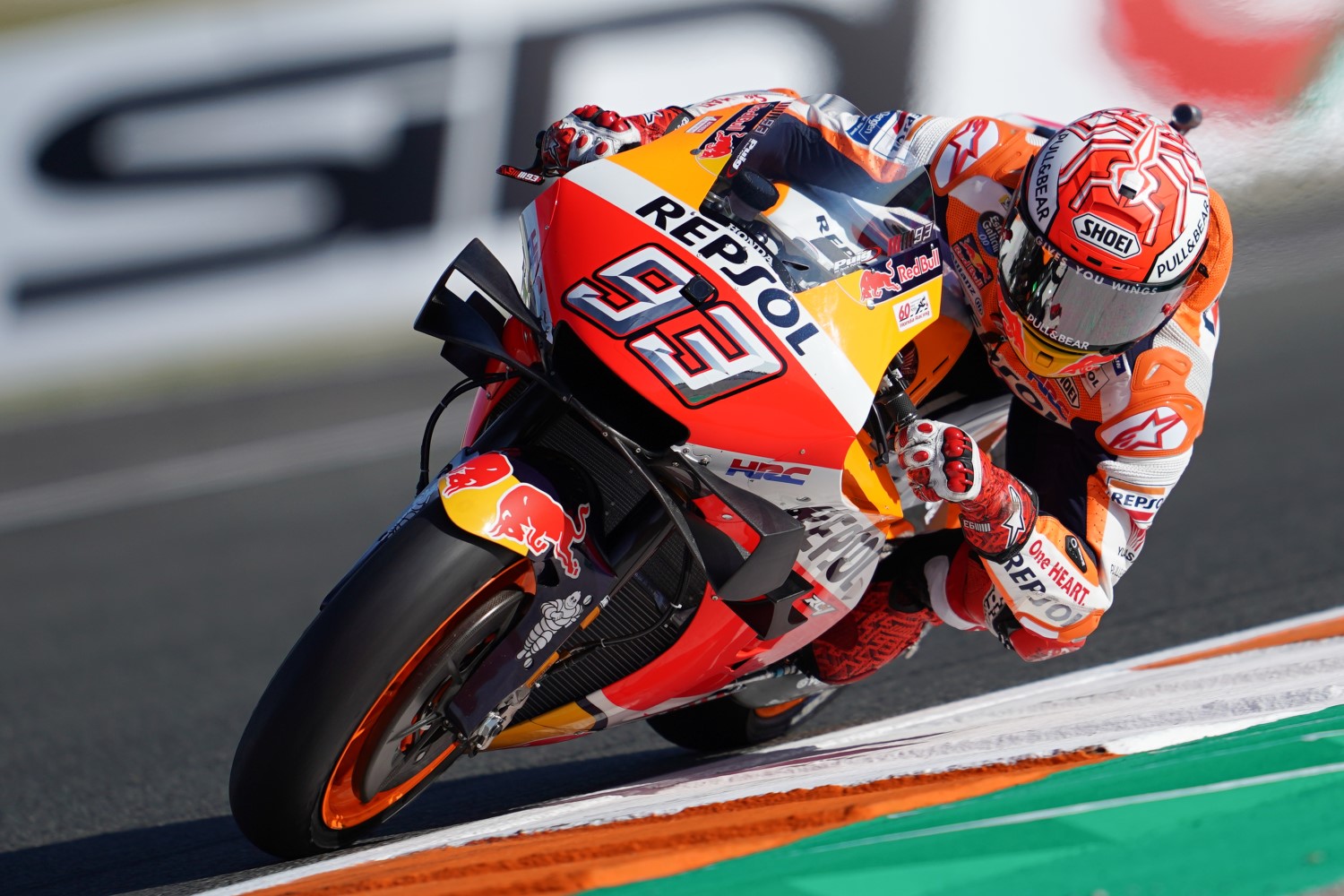 Miller was third on the grid and he launched his Pramac Racing Ducati off the line like a rocket and managed to grab the holeshot into Turn 1, with Marquez getting a sluggish getaway from the middle of the front row to drop down to P6 having run slightly wide at Turn 1.

Polesitter Quartararo then grabbed the lead from Miller as the Australian ran wide at Turn 2, with the Frenchman quickly creating a small gap to his rivals. Heading into Turn 1 on Lap 2, Marquez was into P3 past the fast-starting duo of Alex Rins (Team Suzuki Ecstar) and Andrea Dovizioso (Ducati Team). And it wouldn’t take the 2019 Champion long to pick off Miller as he locked his radar onto Quartararo.

[adinserter name="GOOGLE AD"]The Rookie of the Year’s lead was 0.7 over Marquez, with the latter racing to an eight-tenths advantage over Miller. Marquez was creeping up to the back of the leading M1 slowly but surely, and on Lap 8 a surprise, late but super fine move at Turn 11 saw the number 93 lead.

Suddenly third place Miller – with Dovizioso and Rins in tow – had closed the gap to less than half a second, the top five covered by 1.7. However, Marquez was in the groove and the eight-time Champion had pulled to over half a second clear of Quartararo, with the gap hovering between 0.6 and 0.8 for a number of laps after. Miller wasn’t letting Quartararo have P2 all his own way either, that margin was remaining at a second – enough to keep the number 20 on his toes.

With no one making any real errors, the gaps were staying fair constant. A tenth here and a tenth there saw Marquez stretch his advantage to one and a half seconds with six laps remaining, with Miller cutting the gap to Quartararo down by four tenths – 0.6, was there a late twist for P2 inbound? Not quite, Miller didn’t have enough speed to catch the back of the M1 by the time the checkered flag was waved, with Marquez taking another 25-point haul to land Repsol Honda Team the 2019 triple crown.

Dovizioso and Ducati’s aims of picking up the Teams title didn’t materialize in Valencia, but P4 was a solid result for the Italian who was comfortably best of the rest in 2019. Rins capped off a fine season by claiming P5 at his home Grand Prix, however it wasn’t enough to grab P3 in the Championship from sixth place finisher Maverick Vinales (Monster Energy Yamaha MotoGP) – the Malaysian GP winner having a quiet final round of the season before jumping onto the 2020 Yamaha on Tuesday.

Danilo Petrucci (Ducati Team), Johann Zarco (LCR Honda Idemitsu) and Iker Lecuona (Red Bull KTM Tech 3) all crashed at Turn 6, on Lap 14, in separate incidents. Petrucci was the first to go down, with Zarco then crashing slightly later and further around the corner seconds after.

A scary scenario then unfolded as Lecuona crashed at the exact same place as Zarco. Up and ok after his off, Zarco was then hit by Lecuona’s stricken KTM, sending the Frenchman into a summersault. Thankfully, Zarco – along with Lecuona and Petrucci – was ok. Cal Crutchlow (LCR Honda Castrol), Franco Morbidelli (Petronas Yamaha SRT) and Andrea Iannone (Aprilia Racing Team Gresini) crashed – riders ok.

On his final-ever MotoGP ride, five-time World Champion and future MotoGP Legend Jorge Lorenzo finished P13. It was an emotional day for the Spaniard who arrived back into pitlane to rapturous applause, with the Valencia fans paying their full respects to one of the sport’s greatest ever riders on his cool-down lap. #ThankYouJorge!

Marc Marquez
“A perfect end to a perfect season with the victory! I put a little extra pressure on myself with the gold helmet, so I needed to be extra smart! We did exactly what we wanted to do and won the Team Championship, taking the Triple Crown in this amazing season. Always the Riders Championship is the first objective, but I was happy to help win the Team Championship, not just for them but also for Jorge who has been a great champion, a hard rival and a great teammate. It will be difficult to improve on this year because we rode in a perfect way."