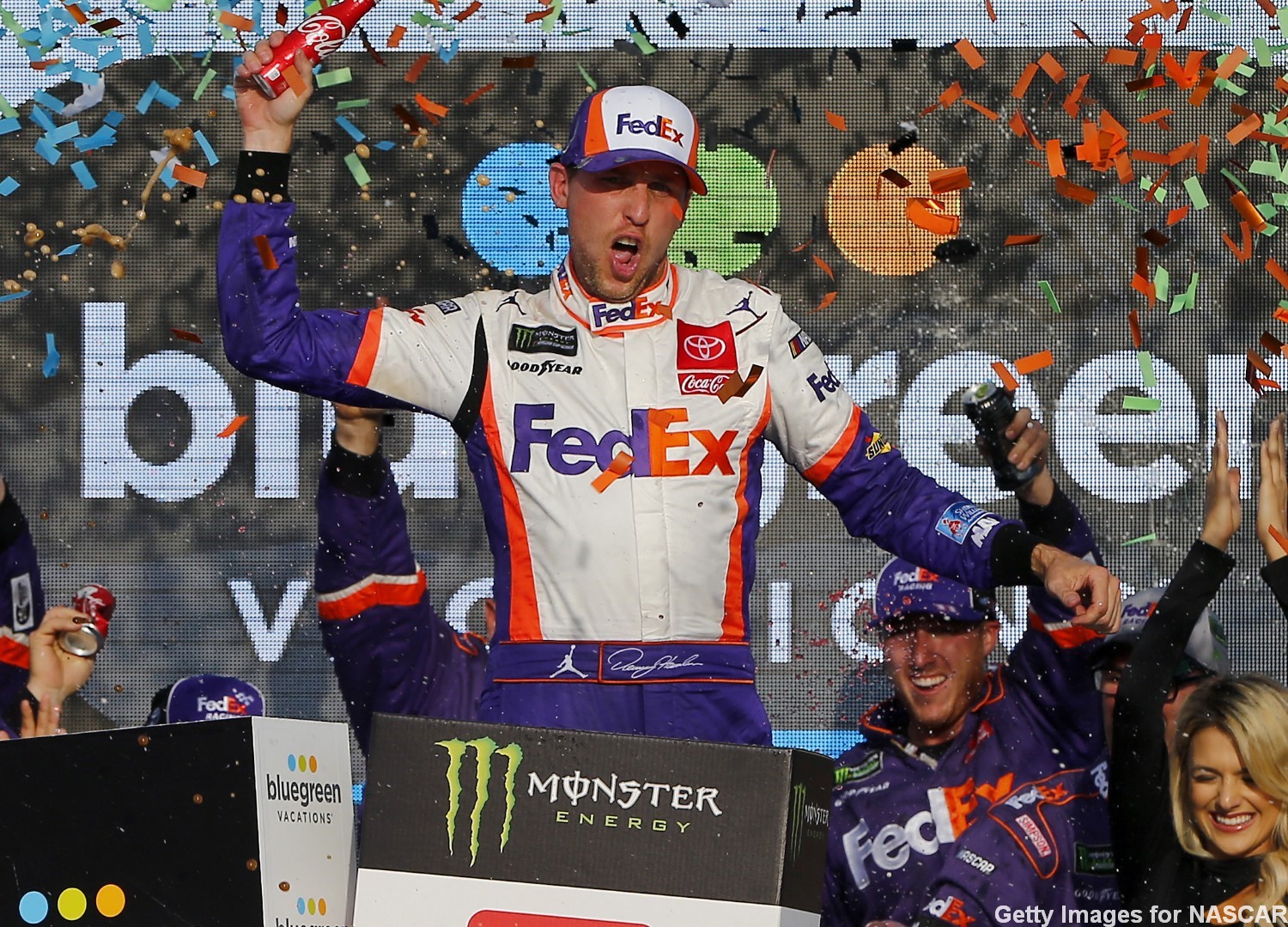 Just a week after an unfortunate slide through the grass nearly ended his championship hopes, Denny Hamlin found redemption in victory lane at ISM Racing in Phoenix on Sunday after winning the Bluegreen Vacations 500 to advance to the Championship 4 season finale next week at Homestead-Miami Speedway.

Hamlin led a race-high 143 laps including 132 of the last 136 and held off one final charge from teammate Kyle Busch in a three-lap shootout to the finish to score his sixth victory of the season.

Hamlin’s performance in the final stage was nearly flawless, and came at just the right time after last weekend’s 28th-place finish put him a nearly insurmountable 20 points below the cut-line to advance to the Championship 4.

[adinserter name="GOOGLE AD"]"I can't believe it," Hamlin said. "This race team worked so hard this whole year. They deserve to be there. I put them in a bad hole last week. I told them today in the meeting, I said, 'I'm going to give everything I've got to make up for the mistake I made last week' – and that's all I got.

"I've been through so many playoffs, so many things that go wrong. This year I'm waiting for the right next thing to go happen. I can't thank this team enough. I don't have words yet. I'm going to have to do a little bit more donuts. I'm not done yet, then go to Homestead."

Hamlin’s crew chief Chris Gabehart made the gutsy call to take on just two tires on the ensuing pit stop, putting Hamlin out of the pits first, while Ryan Blaney – who was also desperate for a win to secure his shot at the title – also took on just two tires and lined up alongside Hamlin for a three-lap dash to the finish.

Coming to the green flag for the biggest restart of his career, Hamlin got a good jump and stuck to the high side while Blaney and Busch swung out three wide to try and take the spot, but fell short as they came into turn one, with Kyle Busch falling in line behind Hamlin and Blaney in third.

By the time Hamlin hit the backstretch, he had Kyle Busch beat by a car length was perfect for the next two laps – beating Busch to the finish by three car-lengths despite having only two fresh tires to Busch’s four and earning him a chance to run for the championship.

Next Sunday’s race will mark just the second time Hamlin as entered the season finale as a championship contender – losing out on the 2010 series title to Jimmie Johnson.

"Obviously in 2010 and the downfall of our championship run there to get it all back 10 years later, this is special to me."

Kyle Busch managed to advance to the Championship 4 for the fifth-straight year despite having not won a single race during this year’s playoffs – a fact not lost on the 2015 series champion who will now have to battle his two teammate who won two of the last three races.

"Thanks for the reminder," said Kyle Busch. "It's cool to have a chance to go race for a championship. Just keep coming up short. Today we just weren't good enough. Next week we'll just have to make sure that we are. Somehow, some way, if it works out, it was meant to be. If it doesn't, then it's not. Hopefully the sun will come up for another day."

Although he led 93 laps and won the second stage, it wasn’t enough for defending series champion Joey Logano, who came home ninth and missed the cut for the Championship 4 – denying him a chance to become the first repeat winner since Jimmie Johnson.

"I don't know how disappointing it is, put a number on it. It hurts," said Logano. "We scratched and clawed and made a race out of it with a lot of adversity throughout these playoffs. We've had a pretty ugly run. We've had some good cars, but something has happened every single race, so it is what it is. It stinks. I don't have the answer of what happened. I wish I did. I really what to know, but no one has it right now.

"It's not what you fight all year for to fight for fifth now, but we will. That's what we'll do next week and we'll try to maximize our day again and try to end the season on a win."

Championship contenders Ryan Blaney and Kyle Larson finished third and fourth, and 31 and 32 points respectively behind Kyle Busch for the final spot in next week’s title fight. Harvick rounded out the top five.

Chase Elliott, the eighth driver in the Round of 8, was the first drive out of the race after spinning and hitting the wall on lap 167.

How does it feel to win the race to advance to the final four?

What did you think coming to the restart after only taking two tires?

"I was nervous. I knew the 4 (Kevin Harvick) was going to be a big deal. My teammates, the 18 (Kyle Busch) was the closest one to us but we got a really good push from Martin (Truex Jr.) there on that final restart. I think he went to go three wide and I went to block and I think he knew I was probably going to wreck if I didn’t win this race. We just did everything we could, did everything right and unfortunate we had to be put in a crazy situation there at the end."

Best drive of your career, Denny.

"One of the best cars of my career, I can tell you that. Fast car. But, yeah, I pushed for all I had. I mean, that's all I got. Once we got the big lead there, a little over 10 seconds, I just kind of sat there. I got to thinking about if the caution does come out, I want to lap as many as I can. That's all we had. So proud of this whole FedEx racing team, proud of Toyota for locking up the manufacturer’s championship this week. Toyota, the Jordan Brand, Little Big Burger, the entire FedEx group for an unbelievable team."

Were the nerves there understanding how big this moment was for your career?

"Yeah, I mean, I try not to put too much into it. There's still work to be done. Doesn't guarantee a championship. Gives us a chance. Live to fight another day. That's all you can ask for."

How big of a swing did the car and everything else take once you lost that clean air out front?

"Yeah, little bit, I guess. Just didn't quite have enough. I knew the 11 was the best car in practice. I knew we were going to be about third to fifth. We were second. Guys did a great job, this M&M Camry was good. Thanks to everybody at JGR, Stanley, Toyota, TRD. It's cool to have a chance to go race for a championship. Just keep coming up short."

How do you go to Miami and do what this team hasn't been able to do in the last 21 races?

"Yeah, thanks for the reminder. Fight as hard as we can, do the best job we can, exactly what we did today. Today we just weren't good enough. Next week we'll just have to make sure that we are. Somehow, some way, if it works out, it was meant to be. If it doesn't, then it's not. Hopefully the sun will come up for another day."

Did you have anything for Denny Hamlin at the end?

"No, I guess if I would have, I would have been a little closer. We gave it everything we had today. The M&M’s Camry was good out front and then we lost the lead and could never get it back. Kind of seemed that way for a few guys, I guess the 22 (Joey Logano) most notably. We were a little bit slower than the 11 (Denny Hamlin) all weekend long. We kind of saw it in practice just a little bit. They had a really good car, did a really good car and they executed well and took two tires there at the end. It’s funny, two tires can overdo four. I have yet to understand that, again. But, must be an aero package thing. So, we’ll just go on to Homestead with a chance to race for a championship and give it our best."

What was going through your mind when the late caution came out with so much on the line?

"Doesn’t surprise me. Just come on down and get a chance with my guys to put four tires on my car and make some adjustments and try to go out there and out race him in a shootout. Denny (Hamlin) was so far ahead of us on rolling on pit road that we just weren’t going to have a shot to beat him off pit road. Overall though, the guys did a great job. Our M&M’s Camry was good this weekend, just not great. The 11 (Denny Hamlin) was definitely better than us all weekend and they showed it and executed it again today. We get to go race for a championship now, so we’ll focus on next week."