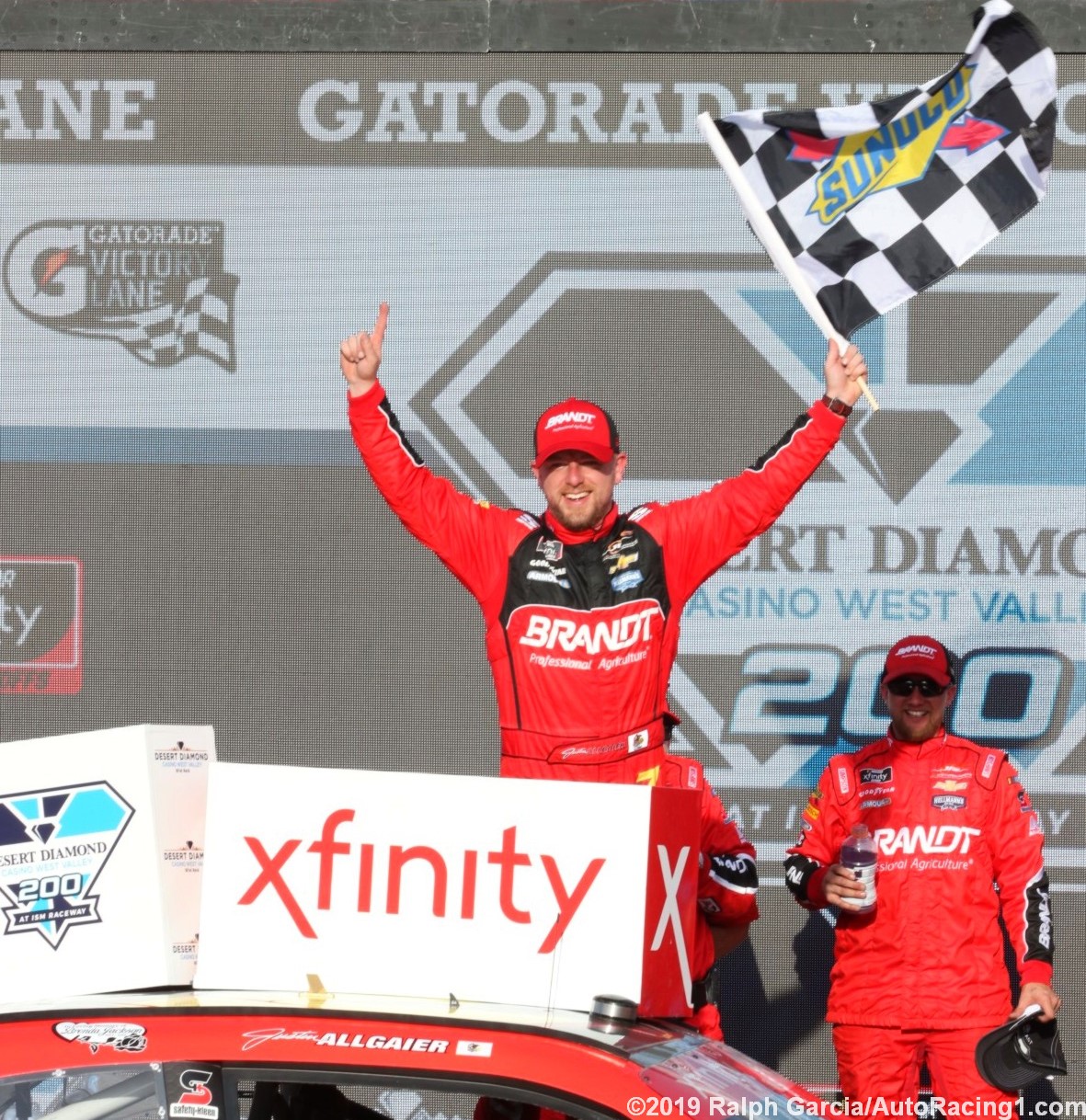 After a pit road speeding penalty and a subsequent spin KO'd the winning chances of polesitter Christopher Bell, Allgaier took full advantage, leading the final 66 laps of Saturday's Desert Diamond West Valley 200 to win for the first time this season and advance to next week's NASCAR Xfinity Series Championship 4 event at Homestead-Miami Speedway.

Allgaier won the race wearing a helmet designed by his six-year-old daughter, Harper.

"This is the first time I've won with Harper's helmet in the car, and it means a lot," Allgaier said. "To have the speed that we've had (this year) and not be able to pull it off has been disappointing. These guys have rallied behind it. We said when we came here that we need to come here and get a win so we could go to Homestead, and we did that…

"We had a hotrod today. I don't think we could have beaten the 20 (Bell), but when he made his mistake, we capitalized on it. That's what it's all about… No question (not winning) is a weight on your shoulders, man. You can't even begin to describe it."

Custer was closing fast at the finish and cut Allgaier's lead of more than three seconds to .810 seconds at the checkered flag on Lap 200.

"I was giving it all I had," Custer said. "I was really struggling with the brake pedal. I kind of lost it at the start of the run. I had to save the whole run until like 15 laps to go, and then I just let it happen. I just came up a little bit short, but I think that was the best run we've had at Phoenix in a long time.

"I'm looking forward to Homestead, and hopefully we can do one spot better."

The top four drivers in the Playoff standings entering Saturday's race were the four who will compete for the championship at Homestead. Missing out on points were sixth-place finisher Austin Cindric, eighth-place Chase Briscoe, ninth-place Michael Annett and 10th-place Noah Gragson.

Bell won the first two stages, bringing his total of stage victories for the season to 22, but was flagged for speeding .03 mph over tolerance under caution at the end of Stage 2. After restarting from the rear, Bell climbed to eighth before spinning out while trying to cut the apron off Turn 2.

"I feel like I gave up a winner," said Bell, whose focus nevertheless has been on next weekend's race at Homestead, where he turned in a disappointing performance in the title event last year.

"This is what it's all about," Bell said. "It all comes down to this one next week. I'm ready for it. I feel really good about where we're at, and our car is going to be extremely strong next week.

"We've prepared a ton for this. Ever since we left Homestead last year, we knew that this race was where we needed to improve. Pretty much all year long, we've been focused on Homestead."