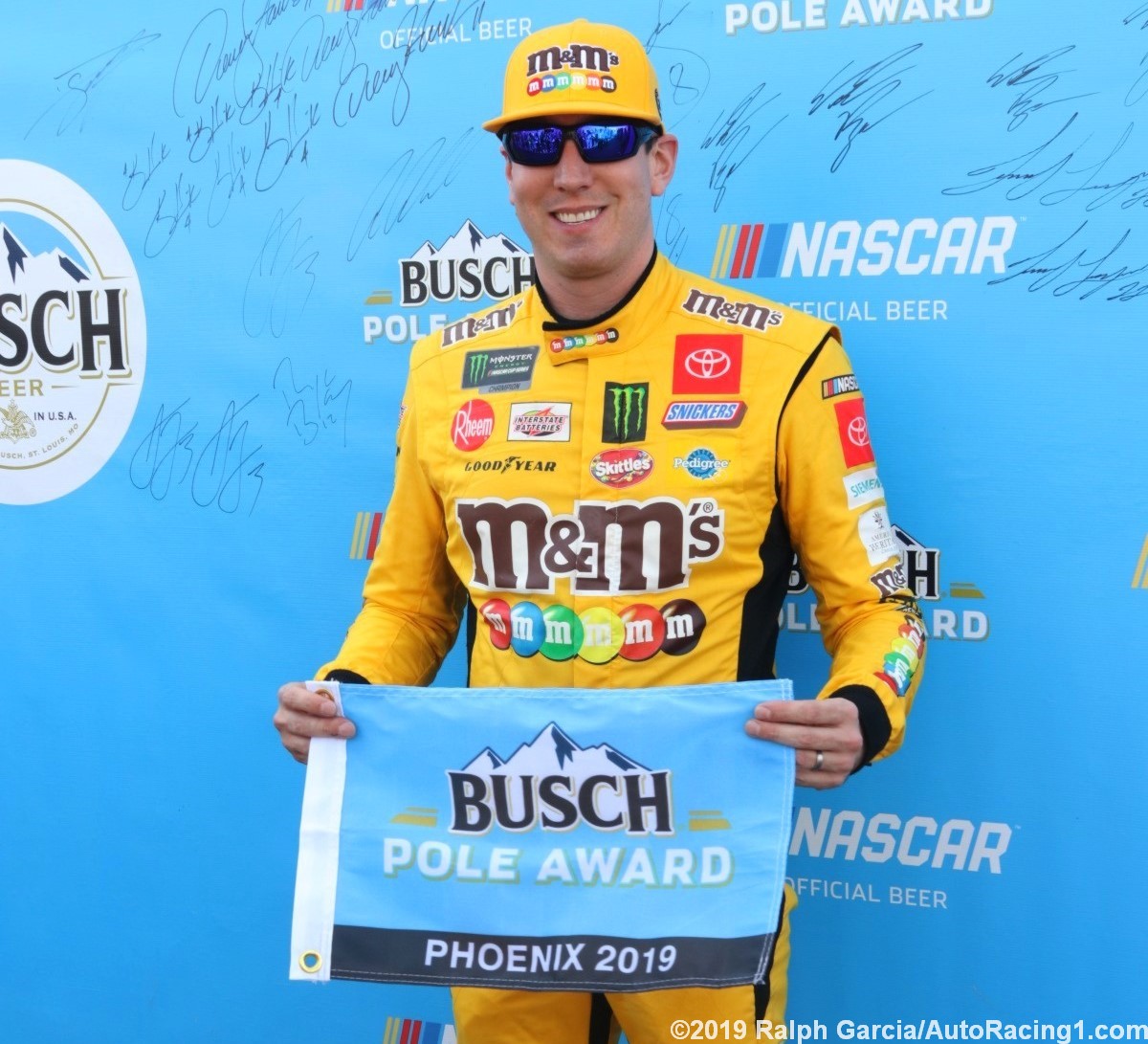 Kyle Busch took his first pole position of the 2019 NASCAR Cup Series season in the penultimate race of the playoffs, the Bluegreen Vacations 500, at ISM Raceway.

It had been over a year since Joe Gibbs Racing’s Kyle Busch took a pole position for a NASCAR Cup Series race, as he last did so for last October’s round of 8 playoff race at Martinsville Speedway.

Busch tripped the clock with a best lap of 140.116 mph in the Joe Gibbs Racing No. 18 Toyota on the 1-mile Arizona oval. His first pole of the season was his fourth at Phoenix and the 32nd of his Monster Energy Series career. He’ll be vying for his third straight Phoenix win in Sunday’s Bluegreen Vacations 500.

Joey Logano is set to start second in the Team Penske No. 22 Ford after just missing the pole at 139.752 mph. Denny Hamlin qualified third in the JGR No. 11 Toyota with teammate Martin Truex Jr. winding up fourth. Kyle Larson, #9 Chase Elliott and #4 Kevin Harvick completing a top-seven sweep by playoff-eligible drivers. Ryan Blaney, the final title hopeful in the field, was 10th-fastest.

Both Truex and Harvick have already clinched spots in the Championship 4 field for the title Nov. 17 at Homestead-Miami Speedway.

Chip Ganassi Racing’s Kurt Busch and Joe Gibbs Racing’s Erik Jones, two playoff drivers who were eliminated following the round of 16, were the highest qualifying non-round of 8 drivers for this race. They qualified in eighth and ninth place in their #1 Chevrolet and #20 Toyota, respectively.

How does starting on the pole help your quest to make the Championship 4?

“It’s obviously a really good starting spot for us and track position is a big deal here. Obviously, it gives us number one pit selection as well, so lots of things that can certainly help us to fire off here to start. Those guys behind us, we know are going to be awfully hungry as well. We just have to see how the race plays out. It puts us in the best possible spot to start off and we’ve got 312 laps to figure it out."

Why was this the first mock run in practive you’ve made this season?

“Honestly, you would have to ask Adam (Stevens, crew chief). I would assume just trying to figure everything out, trying to get a little acclimated to that fast of a lap time and what it takes to make that fast of a lap time. Then also for the guys to adjust on just a few things to make sure our balance was good for qualifying to get the best spot possible. I could say that we made or kind of attemped qualifying runs at speedway races – you try to set your heights and everything for that as well too. That doesn’t matter anyways because we’re always about 30th. Better day today."

Do you feel traffic will be a factor during the race?

“No question, traffic is a big deal. We saw it yesterday in practice. There were times yesterday where I would get stuck behind a couple guys I was following. (Joey) Logano fired off in practice right behind us in the first session and was really good and caught up to us and got by us. He starts right there with us, but I think our car is way better than it was when we unloaded. We made some good adjustments through practice and got the M&M’s Camry hopefully tuned up."

Do you have concerns about possibly being the second place car starting in Homestead after the pole car didn’t get started in the Truck race last night and there was a penalty?

“I guess you always have those scenarios. You try to do the best job you can and be as clean as you can and focus on what you need to do. Playing games is not necessarily one of my strong suits so we just try to go out there and do our job."

[adinserter name="GOOGLE AD"]What does it say that this is your first pole this season?

“A couple years ago, we had the most poles when speed in your race car was what it was for the weekend and now you have no idea what speed is in your race car until you get in the races. I think the short tracks though are a little more towards a true tell as to what’s going to happen. The mile-and-a-half stuff is not even close. Good to get a pole obviously and have one in another season and be able to keep going."

Do you think the penalty issued to Bubba Wallace today will impact what drivers do with a flat tire?

How do you feel about green-white-checkered restarts at ISM Raceway compared to other tracks?

“I think every place is different and I can go down all sorts of different scenarios based off what track you’re at. Here at Phoenix, if you can get a good launch out of the restart zone and get yourself clear by turn one, I would say you have a pretty good opportunity of the race being over. Speedway races, they can end that way too, but they can also develop energy runs from behind and guys can catch up and make moves. Like we saw at Kansas for instance, Denny (Hamlin) was on the inside, I was on the outside and I didn’t get enough push from behind to stay alongside Denny and Denny got clear and it was over by turn one. Nothing else was going to happen. I think that’s kind of what you see with this package a little bit."

How was your car earlier in practice?

“Pretty straight forward. We made a mock (qualifying) run in first practice and I think we were second. I think I’m happy somewhere in the top six is a good goal."

How do you feel about your starting position?

“It will be a good starting spot for sure. I felt okay about our car yesterday. Thought we made some gains on it, and made some more changes on it last night. We’ll see what we can come up with. Looking forward to it."

Are you sending Blake home?

“Yeah, Blake (Harris, car chief) went home to get some work done. He’s getting the Homestead car prepped up and getting it ready."

Is that something your team felt was worth it?

“Blake (Harris, car chief) was here for practice and stuff yesterday, got all his stuff done. From here, we could substitute someone, we couldn’t really substitute somebody for him yesterday. He was a big part of our team. Obviously, that’s why he is going back to work on our car."