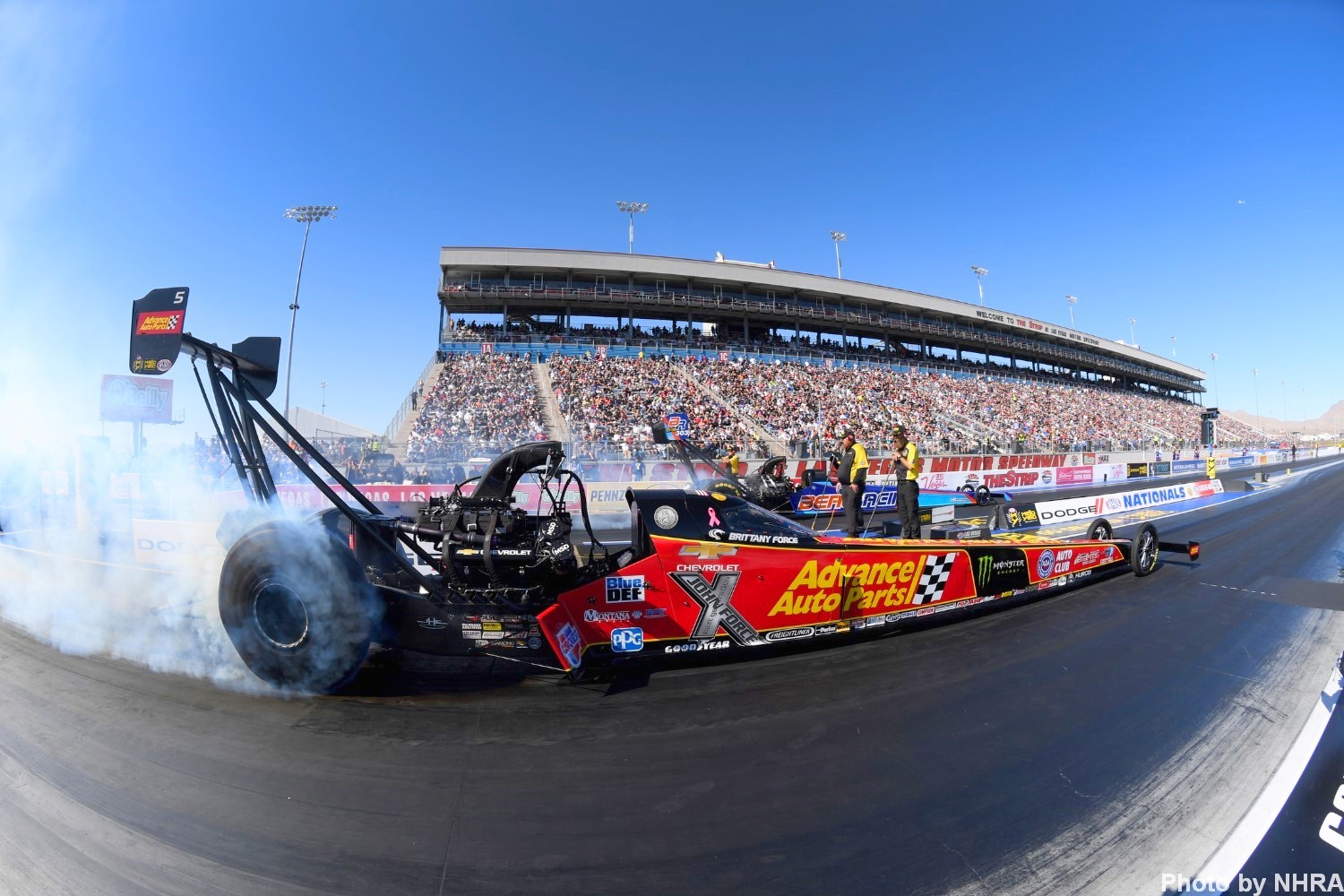 There was so much on the line in the Top Fuel final round at the Dodge NHRA Nationals presented by Pennzoil. A battle between the last two world champs and a chance for the points leader to expand his lead heading into the season finale or a chance for the challenger to cut his lead to next to nothing. And, oh yeah, it was a battle for the trophy at the historic 900th Top Fuel event in NHRA history.

Brittany Force, the 2018 champ, won the final in decisive fashion, her David Grubnic-tuned Advance Auto Parts dragster streaking to low e.t. of the meet, a track-record 3.652, to cut Steve Torrence’s lead to just 16 points heading into the Auto Club NHRA Finals in Pomona. The victory was her 10th in competition, making her just the 27th Top Fuel winner (out of 108 total) to reach double digits in wins, and her first since the Houston event in April.

“This weekend has been incredible for this team, and I’ve always wanted to win here," said Force. “We set the [national speed record] at 338 mph and we already held the e.t. record so we’ve accomplished a lot, but we’re really after that championship. Coming into today I looked at the ladder and realized that we could have a long run. We knew it would be tough but we got the job done.

“We found our groove really quickly and won in Houston [in April] but we hadn’t won since then, so we’re really turning the corner at the right time."

After stumbling in the first two races of the Countdown to the Championship, winning just one round, the Mopar team of driver Matt Hagan and tuner Dickie Venables have come alive and inserted themselves right back into the points battle with his second straight win. In front of a packed house that included executives from both of his primary sponsors, Dodge and Pennzoil, Hagan defeated upset-minded Jonnie Lindberg in the final, 3.87 to 3.94, to climb to third in points.

After early outs in Reading and St. Louis that dropped them to ninth in points, the DSR Dodge Charger Hellcat Widebody entry came alive in Charlotte with a semifinal finish then won all four rounds two weeks ago in Dallas to keep themselves in the title fight.

“A think a lot of people wrote us off after St. Louis," said Hagan. “Everyone was kind of moping around and when we bounced back it was, ‘Wow, guys, we can still do this. I’m going to get my pom-poms out and start cheering because we’re still in this thing. It’s hard to win back to back races and to do this just shows you what we’re capable of. I've learned over 10 years of driving that you have to believe in your abilities and hone your skills, and if it's meant to be =, it's meant to be, Everyone around you has to do their job to their fullest extent but all I can control is leaving the starting line on time, keeping it in the groove, and turning on that win light.

“I’m excited, man, just fired up. When you have the opportunity to come into Pomona still I the championship hunt, that’s why we do this and that’s what gets my adrenaline pumping. I wish Pomona was tomorrow."

Erica Enders just took a huge step toward her third Pro Stock world championship. She earned the 150th win for women in the National Hot Rod Association and extended her lead to 92 points over teammate Jeg Coughlin Jr. by beating him in the final at the Dodge NHRA Nationals.

In the process, she captured the 200th win for the Chevy Camaro in the Pro Stock category in her Elite Motorsports Chevy Camaro. The long list of milestones, which include her 25th victory in the category, will pale in comparison to the one that lies in front of her: The potential of another championship.

Coughlin left second against Enders, who cut an .018-second reaction time. That all but ended the contest as Enders outran her teammate by .003-second after leaving on him by .044-second when the bulbs dropped.

Greg Anderson, who qualified on the pole and won the last race on tour (the AAA Texas NHRA FallNationals) fell to teammate Jason Line in the second round. Line took out Matt Hartford, who entered the event in second place, to shake up the points in the first round. The K.B. Racing teammates battled in the second round for the second-straight event with Line getting the best of this matchup.

Line was not able to get past Coughlin, who advanced to his third final of the season. Coughlin also defeated Fernando Cuadra Sr. and Aaron Stanfield after qualifying in the No. 5 position.

Enders reached her fifth final of the season from the No. 2 position. She defeated Steve Graham, Matt Hartford and Bo Butner en route to a matchup with Coughlin. Her victory extended her lead in Pro Stock, which started at 28 points at the beginning of the Dodge NHRA Nationals presented by Pennzoil.

Enders will enter the final race of the season, the Auto Club NHRA Finals, with a 92-point lead over Coughlin. She is looking for her first title since the 2015 season, when she went back-to-back in her Elite Motorsports Chevy Camaro.

Matt Smith saved his best performance for the last run of the Dodge NHRA Nationals. That worked out just fine. Smith took down rival Steve Johnson to win for the second time in 2019 as he went wire-to-wire, combining pole position with a Wally after running a 6.855-second pass at 195.90-mph to beat Johnson's 6.863 at 194.04.

Smith took advantage of his sixth pole position of 2019 to reach his fourth final of the campaign. The rider of the Denso EBR took down Katie Sullivan, his wife and teammate Angie Smith and rival Andrew Hines while riding the most consistent bike he's had this season.

"It doesn't matter who's in the other lane," said Smith, reference his and Johnson's war of words from earlier in the season. "We're just out here to win no matter what for our partners. This was a good one."

Johnson reached his second final of the season, both of which came in the NHRA Countdown to the Championship, from the No. 2 position. His performance surge has come after taking several races off during the middle of the season, which cost him a shot at making the playoffs.

That has not kept him from being a contender during the Countdown. Johnson defeated Ron Tornow, Angelle Sampey and Scotty Pollacheck en route to the final. He took advantage of a red-light by Sampey, but used terrific performance in the first three rounds to set up a matchup with Smith.

Andrew Hines will enter the final race of the season, the Auto Club NHRA Finals, with a 115-point lead over Jerry Savoie. There are 191 points on the table at the Pomona-based event and Savoie, Eddie Krawiec, Karen Stoffer and Matt Smith are all still in contention for the world championship.