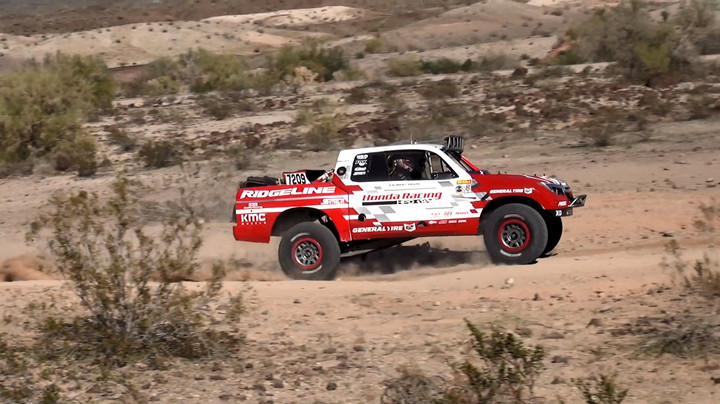 LAS VEGAS, NV – More than five decades in the making, November’s BFGoodrich Tires 52nd annual SCORE Baja 1000, presented by 4 Wheel Parts, has a perspective like no other on the history of desert racing.

Advance racer-registration continues until 8 p.m. (PT) on Monday, Nov.11 at www.score-international.com for this year’s legendary competition. The race and race-week festivities will be held Nov. 19-24 in Ensenada, Baja California, Mexico.

Over 250 entries, from over 30 U.S. States and nearly 20 countries are expected to compete in this year’s 52nd anniversary celebration of the BFGoodrich Tires SCORE Baja 1000, presented by 4 Wheel Parts. There are multiple Pro and Sportsman classes for cars, trucks, utvs, motorcycles and quads.

It will start for the 45th time and finish for the 26th time in Ensenada and the race is annually the finale of the four-race SCORE World Desert Championship, which has been held exclusively for the past four years on Mexico’s Baja California peninsula.

The race and its festivities will be held primarily in and around the historic Riviera del Pacifico Cultural Center in the heart of Ensenada and the start and finish of the legendary race will be adjacent to the Riviera.
With a total time limit of 34 hours in the elapsed-time race, the motorcycle and quad classes will start at 3 a.m. (PT) on Friday, Nov. 22 and the car, truck and UTV classes will follow with their start on at 10:30 a.m. (PT) on Friday, Nov. 22. While the fastest vehicles are expected to cover the course in approximately 16 hours, all vehicles will have 34 hours from the time each starts to become an official finisher.

Here’s a brief look back at some of the plethora of special memories that this Granddaddy of all Desert Races has etched indelibly into the sands of time…
LEGACY—SCORE Baja 1000, No. 1

On November 19-24 of this year, the iconic SCORE Baja 1000, the world’s most iconic, oldest, prestigious, toughest and longest continuously held desert race, will celebrate its 52nd birthday, starting and finishing in Ensenada. We salute some of the stars and memories of this race.

Launching this legacy tribute, we recall two of the greatest racers who have participated in the SCORE Baja 1000—the late Rod Hall and Larry Roeseler.

Hall, who passed away earlier this year at 81 after a long illness, competed in all of the first 50 SCORE Baja 1000 races and earned a race-record 25 class wins in his long and illustrious career.

Roeseler will be at the starting line again for this year’s odyssey in Ensenada. Roeseler is second in all-time class wins with 17. Roeseler is the leader in overall race wins with 13, including 10 on a motorcycle, two on an open-wheel desert race car and one in a SCORE Trophy Truck.

The famous and not-so-famous have tried their hand at conquering the Baja and they have come from all walks of life. Mark Thatcher, son of Great Britain’s then-prime minister Margaret Thatcher, raced in the 1982 SCORE Baja 1000. Celebrities James Garner, Ted Nugent and the late Steve McQueen all battled the Baja in the early 1970s and many racers from other forms of motorsports crossed over to try their skills.

The famous and not-so-famous have tried their hand at conquering the Baja and they have come from all walks of life. Mark Thatcher, son of Great Britain’s then-prime minister Margaret Thatcher, raced in the 1982 SCORE Baja 1000. Celebrities James Garner, Ted Nugent and the late Steve McQueen all battled the Baja in the early 1970s and many racers from other forms of motorsports crossed over to try their skills.

Among the other Hollywood celebrities that have competed in this race are Chuck Norris, Aaron Norris, Michael Nesmith and Larry Wilcox.

With entries expected from over 30 U.S. States and as many as 20 countries, here are the countries that have had at least one entry in the Granddaddy of All Desert Races over the years:

Over the years, SCORE races have been televised in more than 100 nations worldwide.

Part of the legacy of this iconic race, SCORE presents the racers who have been overall winners of the SCORE San Felipe 250, SCORE Baja 500 and SCORE Baja 1000 the SCORE Baja Triple Crown Award.

Since then the only other time the race has started in Tijuana was in 1995 when it also finished in La Paz.

While the race has been point-to-point around once every three years, it has finished twice in Cabo San Lucas (2000 and in 2007).

Overall, the world’s most well-known desert race has started 44 times in Ensenada, three times in Mexicali, twice in Tijuana, once in Ojos Negros and once in Santo Tomas.

Overall, the SCORE Baja 1000 has finished in 25 times in Ensenada, 21 times in La Paz, twice in Mexicali, twice in Cabo San Lucas and once in Ojos Negros.

This race has been the proving grounds for racers and manufacturers. Looking first at the drivers with the most overall wins in the race, Larry Roeseler is clearly on top with 13 (including 10 on a motorcycle, two in an open-wheel desert race car and once in a SCORE Trophy Truck (driving with Roger Norman in 2008).

Tied for second in overall 4-wheel vehicle wins with five each are Andy McMillin, his uncle Mark McMillin, Larry Ragland and Malcolm Smith (including two on motorcycles). With four overall victories each are Rob MacCachren (including three straight years-2014, 2015, 2016) and Dan Smith (which includes one on a motorcycle).

In the battle of manufacturers, several categories are presented.

Leaders in overall Tire manufacturers’ wins for cars/trucks are BFGoodrich Tires (30), Western Auto (6), Firestone (4) and tied with three each are Calahan Cap and Toyo Tires.

With the 51st SCORE Baja 500 this past June in Ensenada, it is interesting to note that there are 11 racers who have overall victories in both that race and the SCORE Baja 1000.

This year’s SCORE Baja 100 is anticipating over 250 entries from over 30 U.S. states and as many as 20 countries. In addition to over 200 news media personnel from around the world, this year’s race will be featured as a one-hour special on ABC TV’s World of X Games programming.

In 51 years of this great race, non-U.S. drivers have been the fastest overall winners in this race only four times, twice in the motorcycle division and twice in the four-wheel vehicle division.

In 1971 and 1972, Sweden’s Gunnar Nilsson won the motorcycle division of the race. In 1971 he team with legendary American desert racing star Malcolm Smith and in 1972 he won with follow Swedish countryman Rolf Tibblin. In both years, Nilsson won on Husqvarna motorcycles.

In 2010, Mexico son/father team of Gus ‘Tavo’ Vildosola Jr/Gus Vildosola Sr became the first Mexican nationals and first non-Americans to win the four-wheel vehicle division when they drove their Ford F-150 to victory in the Ensenada to La Paz peninsula run.

In 2017 at the 50th anniversary race, Mexico son/father team of Carlos ‘Apdaly’ Lopez/Juan C. Lopez became the second Mexican nationals to win the four-wheel vehicle division when they drove their Chevy Rally Truck to victory in the Ensenada to La Paz Golden celebration peninsula run.

Also of note in the motorcycle division in the 2016 race, Australia’s Daymon Stokie was one of three co-riders for the U.S.-based Ox Motorsports team with Colton Udall as rider of record.

Between them, these four innovating desert racing pioneers accumulated 10 overall victories and 15 class wins in the SCORE Baja 1000.

Leading with five overall and eight class wins is Smith who had two overalls on a motorcycle and three in an open-wheel desert race cars. Two of Smith’s overalls were with Dr. Feldkamp (1975 and 1977) and one with ‘Baja’ Bob Gordon (1987).

Ferro, who is a legendary racer and Hollywood stunt driver, won the overall in 1973.

While the magnificent mystery of the Baja peninsula speaks for itself, the masters of Baja have etched their names in the lasting legacy of the Granddaddy of all Desert Races with their class wins in the SCORE Baja 1000.

There are 16 sturdy desert racers who have earned 11 or more class victories in this race. History shows the master to clearly be the incomparable Rod Hall, who passed away this year at 81 as the only person to have competed in all 50 of the first SCORE Baja 1000 races while earning a race-record 25 class wins in this race, eight more than second-place Larry Roeseler who has 17 including a race-high 13 overall victories.

Many of these SCORE Baja legends are expected to compete in this year’s race, including Roeseler, O’Neal, Kaplan, Hengeveld, Franco, Rod Hall’s son—Chad Hall, Moss and Septien.

As of today, included in the first 185 official entries of the more than 250 anticipated for this year’s renewal of the world’s most iconic desert race are competitors from 30 U.S. States and 17 countries.

The 2019 SCORE World Desert Championship is being televised on the ABC TV family of networks, marking the first time back on the ABC network since the 1967 and 1968 coverage of the Baja 1000 on ABC’s old Wide World of Sports show.

The inaugural Lucerna SCORE Baja 400 held in September will air as a one-hour special on ESPN2 TV, also on the World of X Games programming. It first aired on Sunday, Oct. 27.

All of the SCORE race coverage shows will continue to air internationally in nearly 25 countries in Europe, Asia, Latin America and South America via syndication and ESPN International.
SCORE SPONSORS…

For more information regarding SCORE, visit the official website of the SCORE World Desert Championship at www.SCOREInternational.com.