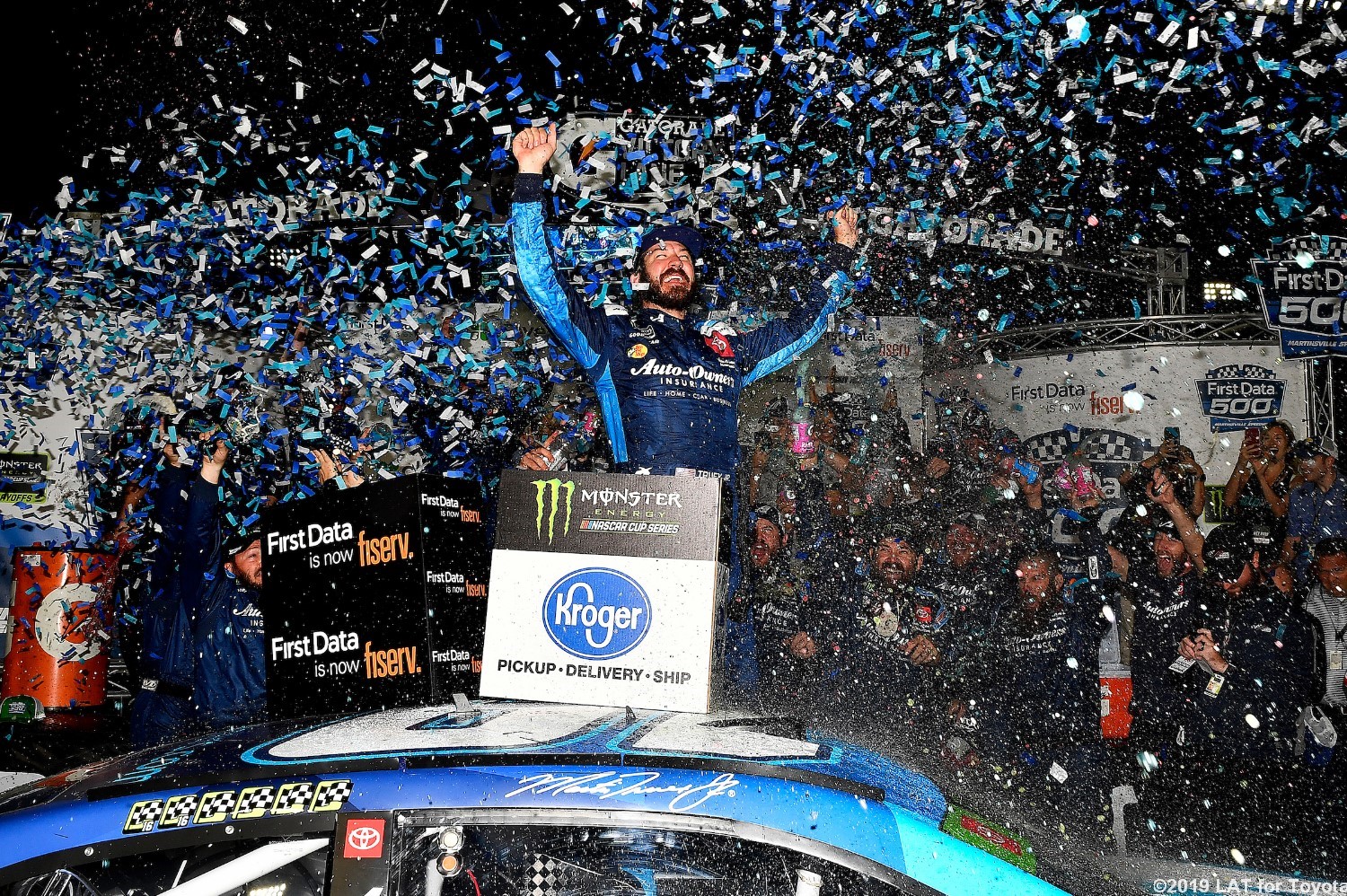 On Sunday, Truex, Jr. didn’t let anyone get close enough to try to repeat that move.

Truex, Jr. led 464 of the 500 laps in the First Data 500, beating out William Byron by about three car lengths to score a dominant win at the half-mile raceway in the first round of the Round of 8 of the Monster Energy NASCAR Cup Series Playoffs.

“I'm just proud to win here," Truex said. “This is a big, big race for anyone in this sport. Grandfather clock coming home with me, baby. I never would have thought it."

En route to the win, Truex swept all three segments of the race, making a statement about his team’s title hopes by punching his ticket to the Championship 4 at Homestead.

It’s the seventh win of the season for the 2017 Cup Series champion, and the 26th of his series career. It also marks his first career win at Martinsville.

[adinserter name="GOOGLE AD"]“I mean, honestly, more than anything I just wanted to win here so bad last year," Truex, Jr. said. “It wasn’t really about getting to Miami because we got there anyway, but this track is so tough. It’s old school. It’s the heart of NASCAR and NASCAR has been coming here so long, the history here is amazing and I’m proud to be a part of that."

But Byron didn’t make the finish as easy as it might have seemed. On the final restart, the 21-year-old stayed right on Truex’s back bumper, pressuring him for several laps. Over the closing laps, Truex was able to gap the field, but Byron closed again on the final lap as the leaders worked through lapped traffic.

But in the end, it was Truex, Jr. crossing under the checkered flag first.

Afterwards, Truex, Jr. said he didn’t think anyone had expected the dominance that the No. 19 Toyota showed on the day.

“This race track in general, you don't see that. Hats off to my guys. Pit crew was stellar today, and we didn't make many adjustments. We adjusted on it early and it came to life, and that was a lot of fun. I don't know, maybe now I've got this place figured out, who knows. But just really proud of everybody, and after last year, we talked earlier, everybody wants to keep talking about last year, and I'm like, we've got work to do. I'm just proud of everybody for giving me a race car like that and being able to put it all together today when it counted."

“I could work my brake bias a little bit in the car and gain a little bit and then I’d get to him and I’d heat them up a lot and kind of fall back. So, I don’t really know. He was super strong. Our car bounced a little bit on the short run, which was tough to kind of get around, but overall it was a really good day. This isn’t a place that I’ve loved coming to, and it just clicked this weekend. The things we did with the car going into qualifying and then obviously our race. So, I’m super excited, but second is not super fun either. So, we’ll try to get one spot better next time."

After the race, a fracas broke out on pit road between Playoff driver Joey Logano and Hamlin and their crews. The incident stemmed from a run-in between the two with less than 50 laps to go. Contact between the two on the front stretch sent Logano into the wall. One lap later, Logano spun in turn one with a flat tire.

Logano and Hamlin were apparently discussing the incident after the race, when Logano apparently shoved Hamlin before attempting to walk away. That triggered an altercation between the two drivers and their teams, which was quickly broken up by team and race officials.

“I was frustrated about the situation, obviously," said Logano. “I really wanted to go over there and talk to him and get his side of the story on what happened and he just said, ‘I ran you up in the wall, basically.’ He wasn’t as apologetic as I was looking for and that probably escalated the situation too much. I shouldn’t have shoved him. For all the kids watching that wasn’t the best thing to do, but I was frustrated, tempers are high. It’s the Playoffs, so that’s what happens."

Another contentious moment came on lap 361, when contact between Kyle Busch and Aric Almirola as they raced inside the top 10 sent both spinning off turn four. Several others were gathered up in the melee, including Jimmie Johnson, Ryan Preece and Ricky Stenhouse, Jr.

Almirola and Johnson were unable to continue, while Kyle Busch finished 14th in the end.

While it was a strong day for several of the points contenders, it was a rough one for Dawsonville, Georgia’s Chase Elliott started the weekend with a fiery engine detonation in practice. That meant despite being second fast in qualifying, he would have to start at the back of the field for Sunday’s race.

After fighting his way into the top 10, Elliott suffered a broken rear axle on lap 178 that sent him to the garage. He returned some 55 laps down, finishing 36th.

"Just disappointing for a day like that," Elliott said. “We know better and we can do better than that."

Elliott now heads to Texas Motor Speedway next weekend 44 points below the cut line, putting him in a must-win situation if he hopes to make the Championship 4.

With Truex, Jr. locked in, Hamlin, Kyle Busch and Logano find themselves on the plus side, with Logano holding a 14 point advantage over the cutoff spot. Harvick, Blaney, Larson and Elliott are on the outside of the cutoff with two races remaining in the Round of 8.

The first to be locked into the Championship 4, how big is that advantage?

“I'll let you know in three weeks. I really don't know. We've never done it this way. We've always pointed our way in through the third round. This is the first time we've won at one of these tracks, so I mean, they still give out trophies and money the next two weeks, we're going to go after them."

What made the difference today and have you ever had this dominating over a car?

“Well, not here that’s for sure. We’ve led some laps here, but not many. We’ve never, I felt like, had the best car here. Last year, we got about the best at the end, but I’m just really proud of this team. We weren’t that great yesterday in practice and I told them what I needed it to do and they went to work last night and got it better and we qualified good. Beginning of the race, I thought yeah, it’s pretty decent, but we need to work on it and a few adjustments later man, the thing was just dominant. I’m just really proud of everybody on this team. Thanks to all the fans for coming out. Man, this is a special race track. This is one everybody wants to win and I’ve worked hard for a long time to try to get better at this place and try to figure it out and thanks to my guys on this team, they’ve helped me figure it out and here we are."

When you’re sitting in the car, can you tell it’s a great pit stop?

“Oh yeah. You can tell. You can tell. You can hear the lugnuts coming off and going on and if it all sounds synchronized and that right side drops before you’re ready for it, you know it’s a good one. Hats off to them. They’ve had an up-and-down season and had to work really hard to get better and better. They’re in the prime right now, so hopefully they can keep it up."

Is there extra satisfaction after what happened last year in already getting into the Championship 4?

“Yeah, I think there is. I mean, honestly, more than anything I just wanted to win here so bad last year. It wasn’t really about getting to Miami because we got there anyway, but this track is so tough. It’s old school. It’s the heart of NASCAR and NASCAR has been coming here so long, the history here is amazing and I’m proud to be a part of that."

Martin, how much redemption is this win for what happened here last year?

“I don't know. I mean, that was completely unrelated to today in my opinion. Luckily, we were just able to do all the right things, and I didn't feel great about our car after practice and we made a lot of changes on it, so hats off to James (Small) and Cole (Pearn, crew chief) for making the right changes. I'm just proud to win here. This is a big, big race for anyone in this sport. Grandfather clock coming home with me, baby. I never would have thought it. Just hats off to everybody on this team back at the shop, TRD, everybody at Costa Mesa; put a beatâ€'down on that engine right there, and she still sounded pretty good, so thanks for that. I'm a lucky guy to drive for these guys, and hopefully we can spend the next two weeks getting ready to go to Homestead and do this again."

“I can't believe we just won Martinsville, man. Miami is awesome, but we've wanted to win here for a long time, but the guys have worked so hard, I've worked so hard. I used to just be terrible here, and just an awesome bunch of guys. What can I say, Auto Owners, Bass Pro, TRD, everybody back at the shop, brand new race car, and again, it still wants to keep going.

Did you expect a performance like that, leading 464 laps?

“I don't think anyone expected that. This race track in general, you don't see that. Hats off to my guys. Pit crew was stellar today, and we didn't make many adjustments. We adjusted on it early and it came to life, and that was a lot of fun. I don't know, maybe now I've got this place figured out, who knows. But just really proud of everybody, and after last year, we talked earlier, everybody wants to keep talking about last year, and I'm like, we've got work to do. I'm just proud of everybody for giving me a race car like that and being able to put it all together today when it counted."

# DENOTES ROOKIE
(I) NOT ELIGIBLE FOR POINTS
P=Playoff Driver