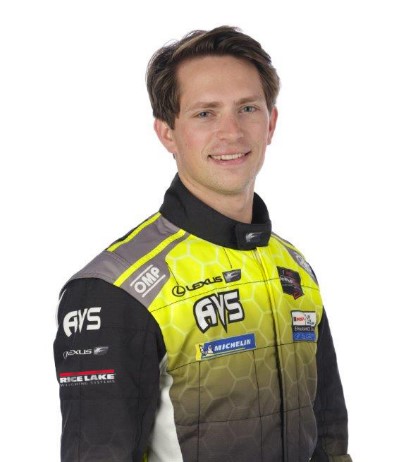 “We’re happy to announce that Aaron Telitz will become a full-time member of the AVS team for the remaining races of the 2020 season," said Jimmy Vasser, co-owner of AIM VASSER SULLIVAN. “Aaron is a fantastic driver and this is the next step in the plan that we started last season when Aaron ran the four IMSA Michelin Endurance Cup races for us and was embedded with our IndyCar team. Aaron did a great job going from open wheel cars to sports cars helping us finish second in our Rolex 24 debut in 2019, and did a great job again in this year’s Rolex 24."

Telitz will team with Jack Hawksworth in the No. 14 AVS Lexus RC F GT3. The No. 12 Lexus RC F GT3 will be piloted by Townsend Bell and Frankie Montecalvo.

Telitz, a native of Wisconsin, progressed through the open-wheel racing ranks capturing the Mazdaspeed/Skip Barber Racing School Scholarship Shootout in 2013 and was the 2014 Team USA Scholarship Recipient. Starting in the Cooper Tires USF2000 Series in 2014, he advanced to the Pro Mazda Championship winning the title in 2016. In 2017, Telitz won two races in the Indy Lights Championship and followed that with nine Indy Lights podiums in 2018 Indy Lights. Most recently he ran three Indy Lights weekends (six races) scoring a win and a podium at Toronto and a podium finish at Road America in 2019.

“I’m super-stoked to be joining the AIM VASSER SULLIVAN team for the 2020 IMSA WeatherTech GTD season. It’s great to be getting a full-time ride. When I joined the team last year, our collective goal was to continue working toward some bigger things and here we are. It’s a culmination of a lot of work. I have a ton of people to thank…my sponsor Rice Lake Weighing Systems, Jimmy, Sulli, Andrew, everyone at AVS and Lexus for trusting me with this position. Let’s go win some races."