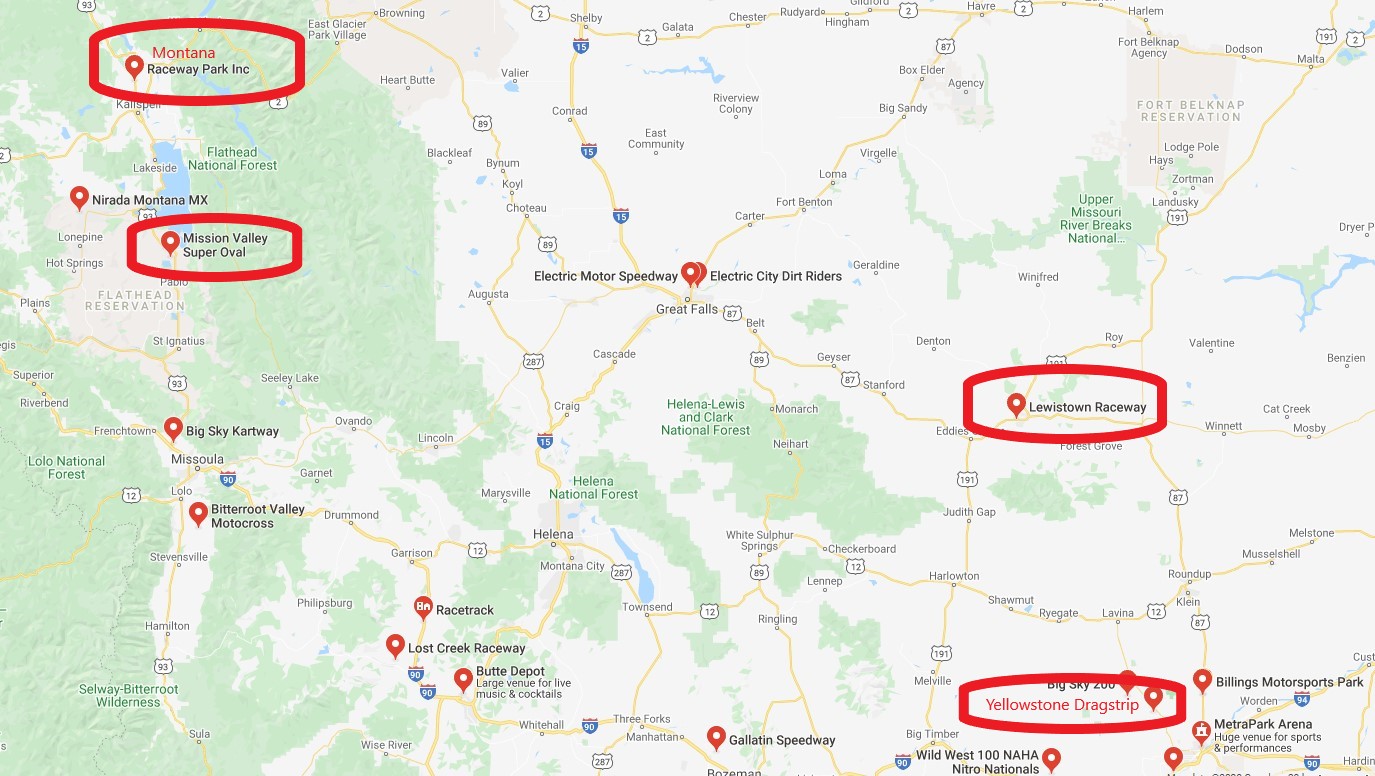 The state of Montana in the U.S.A. is not known as a destination for motor racing, but there are more tracks than you might realize and some hidden jewels. The state has several exciting race tracks, most of which are set against spectacular mountain backdrops.

Below is an overview of four of the best race tracks that you can visit in Montana, but as the map to the right shows, there are more. You can also visit bet-mt.com if you’re looking to start wagering on races.

The Action, Montana drag strip hosts many extremely fast-paced races, and it’s often in action throughout the year. Many motor racers begin and gain their experience at the Intermountain Motor Sports Park before proceeding to larger international race tracks. Although amateur motor racers mostly use the race tracks, the primary races in this sports park attract large crowds of motorsports fans.

As the name suggests, this race track can be found in Lewiston and is one of Montana’s oldest and most popular asphalt drag strips. The drag strip was built in 1957 and hosts 4-5 races throughout the year, and like most drag strips, the races take place over a quarter of a mile. Two racers compete to finish first and clock the fastest time possible to win the trophy and earn bragging rights.

Lewiston’s open spaces and views of the surrounding mountain ranges offer spectators with breathtaking backdrop scenery in which they can enjoy the togetherness and the family-friendly environment found at the Lewiston Raceway.

Built over 30 years ago, this eight of a mile asphalt oval circuit is situated in Polson. In 1996 the Speedway was enlarged and resurfaced after the old Â¼ mile oval asphalt track was torn up and replaced by the current 14-degree high-banked, tri-oval asphalt track.

The famous race track began as a short quarter-mile dirt race track that ran North and South with spectators’ bleachers on the East side. However, due to the bleachers' location, spectators had had to contend with the setting sun. Due to this, the bleachers were transferred to the west side in 1971. It was not until the fall of 1973 that a new facility was started at its current location on North Reservoir road.

The race track is situated near Kalispell, Montana, in the state’s Flathead valley region. The track is the largest and most famous race track in Montana and can accommodate up to 4,000 spectators, and has a parking area that can stage over 100 race teams.

The race track opened on May 1, 1991, and was known as Raceway Park. During its first year, the race track also carried the names Flathead Valley Raceway Park and Kalispell Raceway Park. The asphalt track features a quarter of a mile inside and three-eighths of a mile outside. The tracks have very sharp turns, which put the skills of the drivers to the test.

Drivers from the northwestern United States like Owen Riddle, Agni Howell, and Alex Lessor travel to Montana Raceway Park for the annual Coor Light Montana 200, a race hosted by the racetrack each year since the track opened. Usually, a field of about 40-50 drivers competes for the 24 positions available in the race.