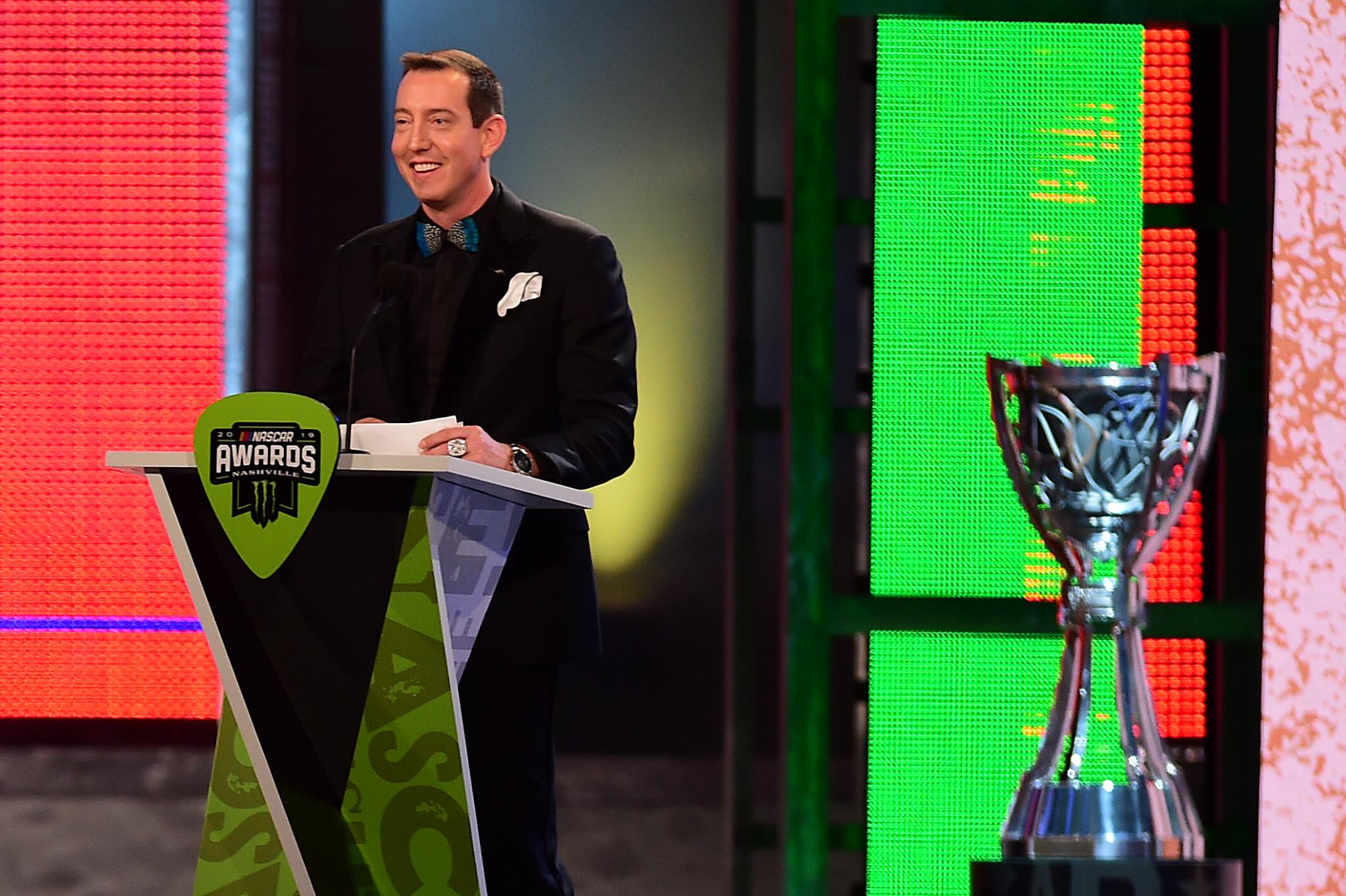 Kyle Busch clearly was the star of Wednesday night's show at the Music City Center—though other drivers and NASCAR stakeholders certainly had their moments, too.

The gathering in Nashville—the first time the NASCAR Awards had traveled to Music City—honored Busch, who drove to his second Monster Energy NASCAR Cup Series Championship on Nov. 17 at Homestead-Miami Speedway.

In a season of remarkable accomplishments, Joe Gibbs Racing, however, competed with sadness for the loss of team president J.D. Gibbs, son of founder Joe Gibbs, who died in January after a long battle against a neurological disorder.

That was one of the first things Busch acknowledged after receiving his championship ring from NASCAR chairman and CEO Jim France.

"Every single person dug a little deeper and gave a little more, even though they raced with heavy hearts," said Busch, who had nothing but praise for crew chief Adam Stevens and his No. 18 Toyota team.

"No matter what was thrown at them, they never gave up," Busch said. "They were able to finish off that final race at Homestead with their best performance."

As did the driver.

Much of the credit for that achievement belonged to Busch, as a five-time winner this year, and Gibbs was quick to express his gratitude.

"Kyle, thanks for your passion, the way you approach things and your talent," Gibbs said.

That wasn't the first time Gibbs had been to the podium. Earlier in the evening he received the prestigious Bill France Award of Excellence for his contributions to the sport.

Busch was one of three JGR drivers who qualified for the Championship 4 race at Homestead. Denny Hamlin finished fourth in the final standings after his team gambled with extra tape on the grille of Hamlin's Toyota, causing an overheating issues that forced an unscheduled pit stop.

To "commemorate" that moment, Hamlin brought a piece of tape to the stage and placed it over his mouth. But that was merely levity at the end of an extremely successful season that brought six victories, including a dramatic win in the Round of 8 cutoff race at ISM Raceway in Phoenix.

"The fact is that, every week, we were a factor, and that's all you can ask for as a driver," said Hamlin, particularly hard-hit by the death of J.D. Gibbs, who was instrumental in bringing Hamlin to the organization.

"This season was going to be about one thing—and that was J.D. Gibbs and his legacy," Hamlin said.

"We miss him, but we could feel J.D.'s presence all year long," Gibbs said.

After county singer Danielle Bradbery introduced third-place finisher and four-time winner Kevin Harvick as "one of the elder statemen of NASCAR," Homestead runner-up and seven-time winner Martin Truex Jr. followed, still lamenting the pit road snafu that cost him a shot at the title.

"Man, second again," said Truex, who was runner-up in 2018 after winning the title in 2017. "I think I hate second more than Kyle—I think that's possible."

To no one's surprise, Chase Elliott won his second straight NMPA Most Popular Driver Award for the Cup Series, via online voting by NASCAR fans.

"It's more than a trophy or a sticker or an award," said Elliott, whose father, Bill Elliott, received the honor a record 16 times. "I really enjoyed this past season and seeing all the people at the race track who wanted us to do good.

"Hopefully, I can make everybody proud next year, too."

Dave Wilson, president of Toyota Racing Development U.S.A., accepted the manufacturer's championship for the car maker. And an emotional—and surprised—Darrell Waltrip was honored with the NMPA Myers Brothers Award for his contributions to the sport as a driver, team owner and broadcaster.

Waltrip called his last race from the FOX Sports booth this year.

"This is a huge surprise," said Waltrip. "To tell you the truth, (wife) Stevie and I almost didn't come. That would have been pretty embarrassing. What a thrill! I thought retirement kind of sucked, but with things like this, I'll probably enjoy it more."

Joe Vaughan, long-time volunteer and leader of the South Carolina-based Project HOPE Foundation, was selected from a group of four finalists as the recipient of The NASCAR Foundation's Betty Jane France Humanitarian Award and the $100,000 grant that goes with it.

The Project HOPE Foundation performs a crucial function within the autism community and is an excellent fit with the Betty Jane France Award, which honors the philanthropic ideals and vision of The NASCAR Foundation's late founder and chairperson and is annually presented to a NASCAR fan who embodies those ideals.

In its first year in Nashville after a long stint in Las Vegas, the NASCAR Awards celebration seemed an ideal fit with the capital of country music. The succession of introducers was replete with recording artists in a program that also included performances by Cole Swindell and co-host Cassadee Pope.

No doubt the festivities took their toll on more than a few participants.

"We've got to figure out how to have this banquet first," pleaded Playoff driver Clint Bowyer, "because there's a lot of hung-over people here."