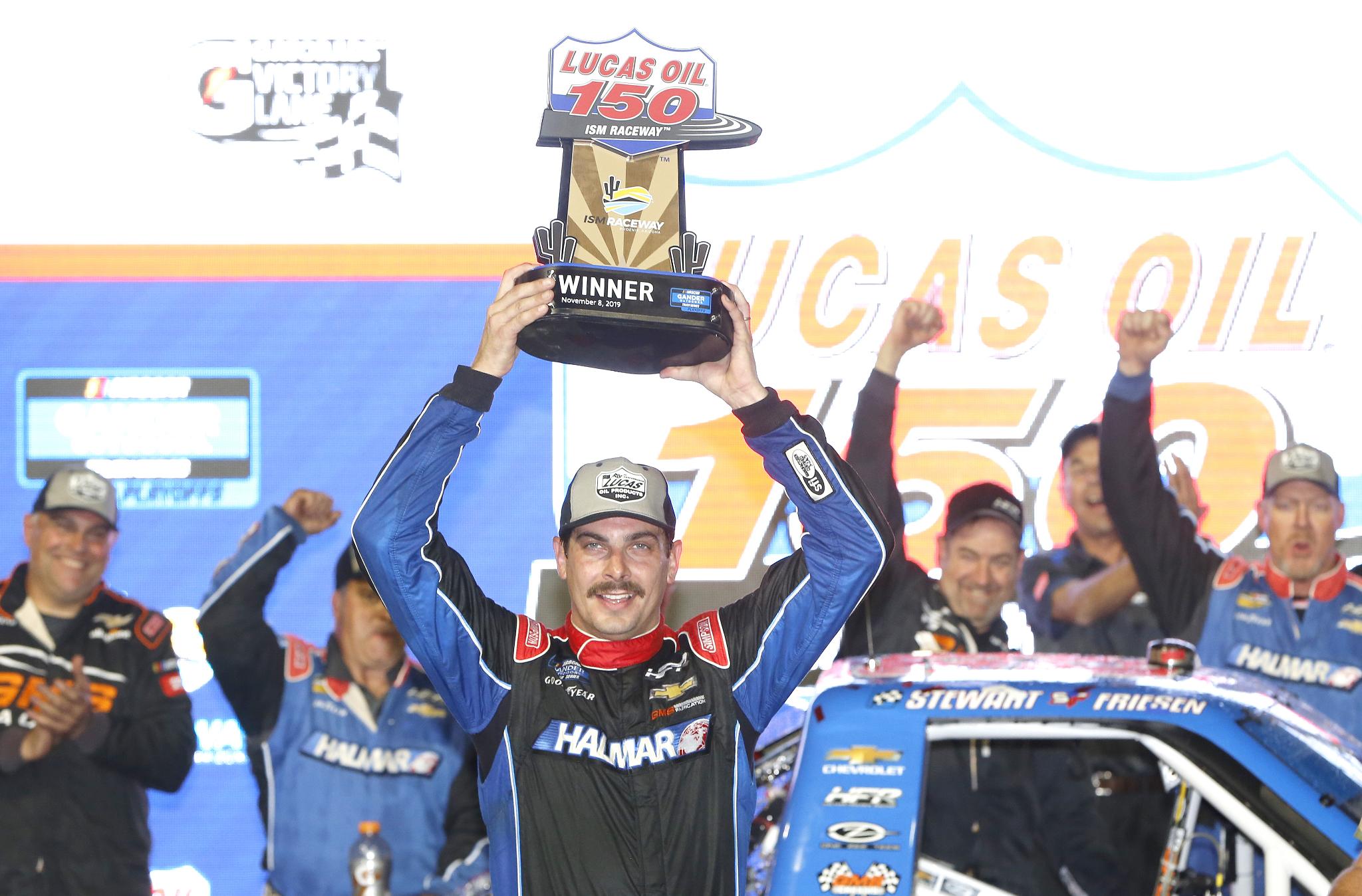 Stewart Friesen thought he had led the first lap of Friday night's Lucas Oil 150 at ISM Raceway in Phoenix.

After suffering a penalty for jumping the start of the race, however, Friesen rallied to lead the lap that counted most—the last one— and secured a spot in next weekend's Championship 4 race with the second NASCAR Gander Outdoors Truck Series victory of the season and his career.

"We've got a badass piece for next week, too," promised Friesen, who will try for the title next Friday at Homestead-Miami Speedway.

Friesen will have to contend with defending series champion Brett Moffitt, who locked himself into the Championship 4 after finishing ninth in the second stage of Friday night's race.

After the fifth and final caution of the evening for a wreck in Turn 3 involving Sam Mayer and John Hunter Nemechek, Friesen charged into the lead before past Brandon Jones and Ben Rhodes and led the final 44 circuits.

It was no cakewalk, though. With five laps left, Jones made a last-ditch run to the inside of Friesen but couldn't get past the No. 52 Chevrolet. Friesen pulled away on the last two laps to beat Jones to the finish line by .860 seconds.

"It was a great race car," said Friesen, who was sent to the rear of the field after getting to the stripe ahead of Hill, who spun his tires on the initial start. "We were able to pass ‘em all, pass ‘em all clean," said Friesen.

"Great race car, great race team. We'll all celebrate tomorrow, and then it's game on."

Moffitt came to Phoenix with the series lead and was first to clinch a spot in the final race. But the driver of the No. 24 GMS Racing Chevrolet, who won last year's championship driving for Hattori Racing Enterprises, had two objectives on Friday.

My main concern for the day was getting us locked into the owner points as well," Moffitt said. "We got both jobs done today."

Chastain finished with a 13-point margin over Hill, who lost ground to Crafton on the Lap 107 restart and never recovered. Chastain didn't declare for the Truck Series championship until nine races into the season but qualified for the Championship 4 nevertheless.

Crafton came to Phoenix nine points behind Hill but made up most of the deficit with 17 points combined in the first two stages.

"I didn't have anything to lose and everything to gain," Crafton said. "And that's the way I drove it from the green flag to the checkered flag."

Hill joined fellow Toyota driver Tyler Ankrum on the sidelines for the final race. Ankrum suffered early damage and finished 26th, six laps down. Hill simply didn't have any juice on the restarts.

"We just didn't have any short-run speed," Hill said. "I hate it for my guys. I just couldn't do anything on the restarts. The front end would slide, the rear would slide, and during that last long green-flag run, it was terrible.

"I hate that we finished where we did, especially after qualifying from the pole. I definitely had high hopes for the race after qualifying on the pole and showing speed in second practice. We'll move on to Homestead and regroup for next year."