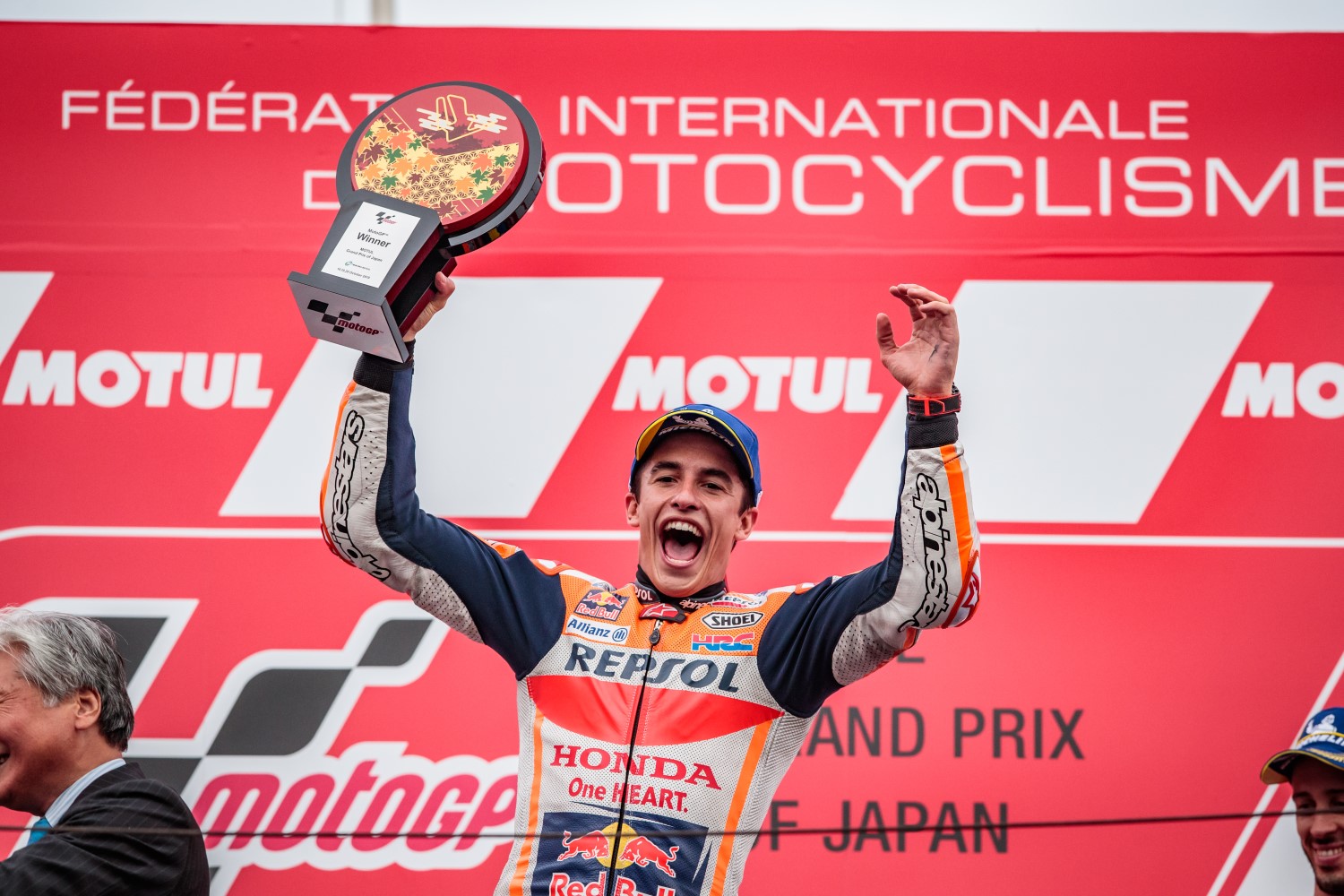 Marc Marquez led every lap to win his 10th MotoGP win of the season ahead of Yamaha rookie Fabio Quartararo at the Japanese Grand Prix in Motegi. In taking the win Marquez secured Honda the manufacturers' world championship.

Launching perfectly off the line, Marc Marquez went around the outside of his competition to lead through the first corner.

Fabio Quartararo tried to respond to the pace of the eight-time World Champion, but within just three laps Marquez had an advantage of over one second and followed it up with successive flying laps.

By lap 13 the gap had grown to two seconds and the reigning World Champion switched his attention to managing the race.

Crossing the line 0.870s ahead of Quartararo after easing his pace in the closing laps, the Repsol Honda Team rider continued his perfect record of top-two finishes in 2019. The victory is the tenth 2019 and his fourth in a row, the first time Marquez has achieved four-straight wins in the premier class since 2014.

Taking his 54th win in the premier class, Marc Marquez draws level with the legendary Mick Doohan as the most successful premier class Honda rider. The 14 podiums, 13 of them in succession, of 2019 also move Marc Marquez to 350 World Championship points, just 33 points shy of Jorge Lorenzo’s all-time premier class points record of 383 with 75 points still to play for.

Quartararo, meanwhile, had managed to stay about a second behind Marquez until the Repsol Honda rider put the hammer down and showed the rookie he was toying with him.

[adinserter name="GOOGLE AD"]He extended his advantage beyond two seconds on Lap 13, while Dovizioso got by Morbidelli at Turn 11 on Lap 14.

Vinales, too, went by #21 at the start of Lap 16 and the Monster Energy Yamaha rider became a serious threat to Dovizioso’s hopes of a podium.

Dovizioso was able to hold the M1 at bay through the corners, with Vinales particularly strong through Turn 7, and had seen off the challenge with a couple of laps to go.

The Ducati pilot started to reel in Quartararo, starting the 24th and final lap 0.882s behind the rookie, but ran out of laps.

Marquez eased off but still won for the 54th time in the premier class, drawing level with another multiple world champion for Honda in Mick Doohan, by 0.870s.

Quartararo put the Rookie of the Year title beyond doubt by finishing 0.455s up on Dovizioso, who consolidated second position in the standings at 55 points clear of Alex Rins and Vinales.

The MotoGP World Championship now heads directly to round 17, the Australian Grand Prix at Phillip Island from October 25 to 27.

“It wasn’t an easy race. I was pushing from the beginning, the strategy was clear – I had to try to open a gap. I felt strong and with the team we had calculated a pace of 1’46 low but then I was able to ride in 1’45 high – good news for me but I had to slow down a little bit. I worked on riding as smooth as possible and I was able to open the gap to two seconds but in the final two laps we were getting a little low on fuel because Motegi is always very demanding. There was a little bit of pressure to win the Constructors Championship in Japan, but I love the pressure and it is great to win it here for Honda because everyone works so hard. All the Repsol Honda Team did a great job to find the best setting and strategy for this race."