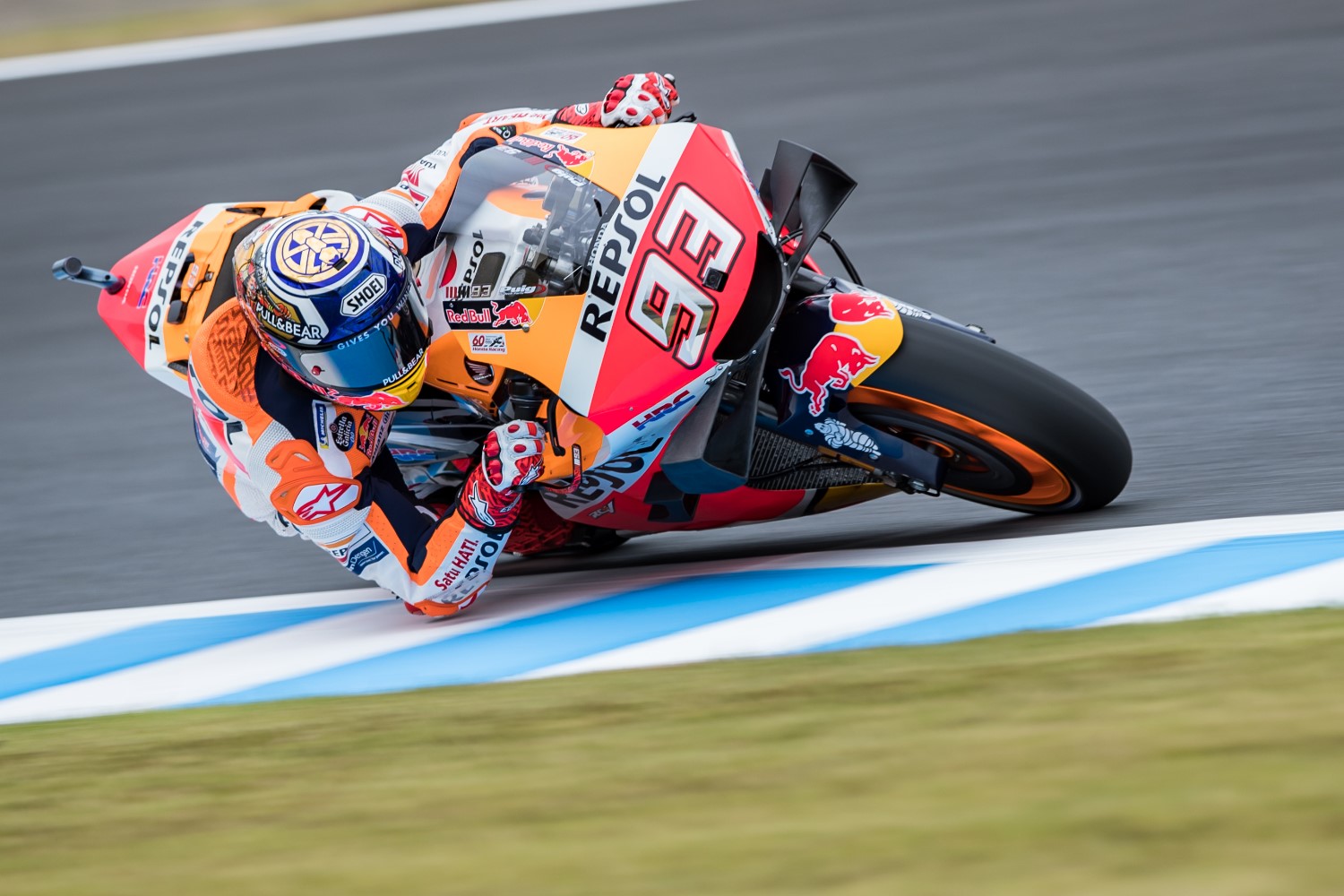 The Saturday morning rain had cleared for qualifying and after a damp start to FP4 proceedings, the Twin Ring Motegi was dry for both Q1 and Q2. In the second part of qualifying, unsurprisingly it was Marquez who was straight in with the fast times. On his first flying lap the number 93 edged out Jack Miller (Pramac Racing) by just over a tenth but on his next lap, Marquez propelled himself to over a second ahead of his rivals, with Quartararo getting within 0.8 after a couple of rapid laps.

Morbidelli and Miller then exchanged P2 in quick succession to reel Marquez back in, but the ruthless eight-time Champion then moved the goalposts further – 0.567 his advantage at this point before fresh Michelin rubber was put in. The Yamahas of Quartararo and Maverick Vinales (Monster Energy Yamaha MotoGP) were then looking fierce as the duo took turns in being Marquez’ closest competitor.

[adinserter name="GOOGLE AD"]They couldn’t get within two tenths of the Repsol Honda though, as another Honda rider then pushed himself onto the provisional second row. That man was Q1 graduate Cal Crutchlow (LCR Honda Castrol), with Morbidelli then pouncing onto the front row. Red sectors then appeared for Crutchlow and Miller, but the two would both lose time in the latter half of the lap. Marquez was then matching his best time and sure enough, he found tenths in the final split to improve his time by 0.031 – an unbeatable time?

Quartararo was lacking just 0.090 on his final flying lap but couldn’t quite find enough time, the Frenchman slotting in behind teammate Morbidelli on the front row as the two Petronas machines shadow Marquez, the Italian claiming his equal-best MotoGP Q2 result. No one could beat Marquez today as he now boasts a premier class pole position at every circuit on the current calendar, another nice little record for the number 93. Fourth place for Vinales means there’s a triple M1 threat coming the way of the Champion on Sunday afternoon, but it's the first time he's off the front row since Silverstone.

Crutchlow produced a sterling job to stick his LCR Honda Castrol RC213V in the middle of the second row, that’s the Briton’s best qualifying result since being on the front row in America, with his good friend Miller lining up alongside him in P6 as the leading Ducati rider.

Pole number 10 for Marquez in 2019 sees him hold the advantage off the line on Sunday, but you can bet your bottom yen that he isn’t going to have it all his own way at Motegi. Three Yamahas are waiting to attack on Sunday, Round 16 is one you don’t want to miss.

Marc Marquez 93
1ST 1'45.763
“First pole position on the MotoGP bike in Motegi is great, I didn't know it was the last one! It’s a circuit that I usually struggle at a bit but today the setup was working very well in Qualifying and I was able to ride in a different way. It's important to start on pole at the home of Honda. I felt very strong during Free Practice 4 but the conditions weren’t really normal. It was still a bit wet out on track, tomorrow we will have a lot of pressure from Yamaha and Dovizioso I think, so we still need to work a bit in Warm Up. The target is to fight for the victory, let’s see what the conditions are."