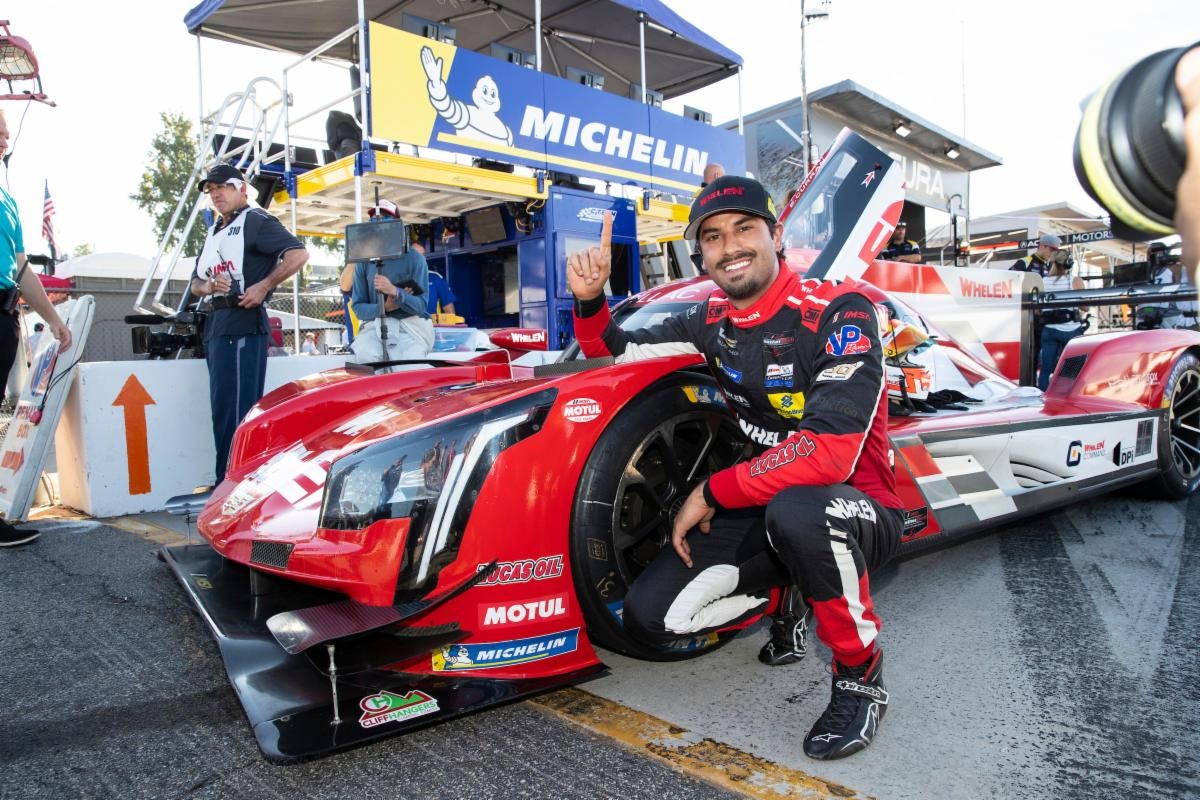 The Whelen Cadillac will start the season ending round of the IMSA WeatherTech SportsCar Championship Motul Petit Le Mans from pole position for tomorrow's race at Michelin Raceway Road Atlanta.

Felipe Nasr drove the No. 31 Whelen Engineering Cadillac DPi-V.R to pole position with a time of 1:08.457. The Whelen Cadillac team has been at the top of the time sheet all weekend. The pole is the first for Nasr and the Whelen Cadillac in the DPi era.

The driving trio of Nasr, Pipo Derani and Eric Curran are motivated to win the race on Saturday. The team still has chance at the IMSA DPi Championship. To win the big trophy, the No. 6 Acura would have to finish ninth or worse with the Whelen Cadillac winning for the team to take top honors as they trail by 12 points.

[adinserter name="GOOGLE AD"]Piloting the No. 31 Whelen Engineering Racing Cadillac, Nasr shattered by nearly two seconds the lap record set a year ago by co-driver Pipo Derani, to take the Daytona Prototype international (DPi) and overall pole positions. Nasr sped around the 12-turn, 2.54-mile Michelin Raceway road course in one minute, 8.457 seconds (133.573 mph) to nail down his maiden pole position in his second season in the series.

“Finally! It’s great to get a pole position, after all I’ve spent, what, two years in the series," Nasr said. “I’ve been close a few times, but never got the job done. It’s a nice place to do it here at Road Atlanta.

“I have to say I was pretty happy with the lap. … I felt pretty confident going into qualifying because I knew the car I had on my hands. I worked with my engineer on the final details and I think it paid off."

The effort also kept alive the No. 31’s hopes to repeat as DPi champions. Nasr, Derani and third driver Eric Curran must win Saturday’s iconic 10-hour race and have the No. 6 Acura Team Penske DPi finish ninth or worse to complete the back-to-back feat.

“Action Express has done an amazing job to get our Whelen car up front, but I feel like we have a winning package all around," Nasr said. “It’s the final race of the season, so I want to go for the victory. The boys are in the same spirit as well, so we all want to get the job done and race smart."

Dane Cameron qualified the No. 6 Acura in fourth position with a lap of 1:08.802 (132.902 mph), during an amazing session that saw all but one of the 11 DPi entries eclipse Derani’s 2018 lap record of 1:10.437. Cameron and Juan Pablo Montoya clinch the DPi championship with a finish of eighth place or better on Saturday, no matter what the No. 31 does. Reigning Indy 500 winner Simon Pagenaud fills out the No. 6 driver lineup for Saturday.

McMurry will win the LMP2 driver’s title and the No. 52 will take the team crown by starting Saturday’s race.

“It was a really competitive qualifying," said Masson, who will share the No. 38 with Cameron Cassels and Andrew Evans in the race. “Matt (McMurry) did a great job putting down a time. When I heard his position in front of me on our third lap out, I knew I had to put it down. But (1:10)-something for the LMP2 cars, especially with the added weight and the BOP, it was about all I had. I was really happy with it."

The familiar No. 62 red Risi Competizione Ferrari 488 GT3 has returned to IMSA and the Motul Petit Le Mans for the final race of the year and marked that reappearance with a bang by winning the GT Le Mans (GTLM) pole.

James Calado piloted the car to a lap of one minute, 15.639 seconds (120.889 mph) Friday to earn his first WeatherTech Championship pole. The time broke the old mark of 1:17.006 set by BMW’s John Edwards last year.

“It’s pretty awesome," Calado said. “It is so nice to come into the box and see the team’s spirit lifted and the emotion on everyone’s faces. So this is what’s important in going forward and winning races."

While he easily set a record, Calado mentioned it wasn’t the best he could have done.

“The line wasn’t perfect," he added. “I lost half a tenth (of a second) in the last corner but it was good enough for P1. It was extremely close and all manufacturers are pushing hard. It wasn’t easy out there. The track is difficult. We are confident the car is good and ready to go."

To demonstrate how close the qualifying session was, all nine cars in the class broke the old mark set by Edwards last year. The top five cars were each from a different manufacturer and separated by just .217 seconds.

The No. 3 Corvette driven by Antonio Garcia initially qualified second with a time of 1:15.702 (120.789 mph) but was moved to the rear of the GTLM grid when its rear wing was found out of compliance during post-qualifying inspection.

Vanthoor and co-driver Earl Bamber have a 12-point advantage in the GTLM driver and team standings over No. 911 teammates Nick Tandy and Patrick Pilet going into Saturday’s race.

James Calado, driver, No. 62 Ferrari 488 GTLM:
"It's gone really well obviously. We've had a good Friday and the car is working well, which is amazing. Getting pole is obviously a great bonus for the team, just one of the last of many basically because we have a lot of laps tomorrow. We've got to stay realistic and understand what the best strategy is going to be. It's great to see an uplift in the team. You live for these moments. When you come in the pits and you see everyone cheering and happy, that's what you want to see. It's great for Risi and Giuseppe especially.

"Let's just hope we can get good results tomorrow. I think breaking a track record is always nice; the cars do get quicker every year. There's been some improvements to the circuit. It's seriously hot here and that doesn't help the tires. The lap was pretty good, and I gave it pretty much everything I had; it was really, really close but just enough. We are just going to try to do that for ten hours tomorrow."

Alessandro Pier Guidi, driver, No. 62 Ferrari 488 GTLM:
"I think everything went super well. We did a good job, including yesterday, which is surprising because not doing many races this season in IMSA put us a little behind, but we worked hard together as a team. Qualifying went well, but honestly, the car was good since the beginning. We all did really well as a team — we improved some things, the last thing we changed this morning worked well. James did a very great job, so I'm so happy. I'm so happy to come back here and be on pole in qualifying, it is just the spot to start the weekend. Now we need to be consistent during the race down to the last hour. I'm pretty confident that the team will do a good job, also us (drivers), so let's see tomorrow in the end."

Daniel Serra, driver, No. 62 Ferrari 488 GTLM:
"It is super good to start from pole position. Of course, we still have 10 hours to go. It's a long race. In the U.S., racing is until the last minute, which is super nice. So far so good, let's see what we can do tomorrow. All three drivers seem super comfortable with the car so now we go racing."

Lewis Claims GTD Pole in No. 48 Lamborghini after Feller’s Laps in No. 29 Audi Disallowed

Friday’s qualifying session was extended due to a red flag caused when Robby Foley went off course in Turn 10 and his No. 96 Turner Motorsport BMW M8 GT3 became stuck in the gravel trap. No driver had turned a complete lap when the red waved and the No. 96 didn’t return to the track after being carried to the paddock on a flatbed truck.

When qualifying resumed, Ricky Feller posted a sizzling lap of 1:19.185 in the No. 29 Montplast by Land Motorsport Audi R8 LMS GT3 that would have been good for pole by nearly four-tenths of a second. But all of Feller’s laps, as well as those posted by Shinya Michimi in the No. 47 Precision Performance Motorsports Lamborghini, were disallowed because their crews touched the cars during the red-flag stoppage.

Lewis was happy to accept the lap record anyway, on the heels of the pole and race win he and Bryan Sellers collected last month at WeatherTech Raceway Laguna Seca.

“It’s special," Lewis said of the Michelin Raceway GTD lap record. “I didn’t know it until I just got up here, so that’s pretty cool. So to have your name in the record books for qualifying is special for sure. It’s a nice little feather in the cap."

Lewis also believes the No. 48, with Marco Seefried as the third driver this weekend, has a leg up for the race since Michelin Raceway is the team’s home track.

“We’re based here in Atlanta," Lewis said. “We’ve done, over the years, a fair amount of testing here. We have a good grip on the track.

“Coming here to Road Atlanta, it’s strong suit for the team. … We have a long way to go tomorrow, but starting on the front row certainly doesn’t hurt."

Justin Marks put the No. 86 Meyer Shank Racing with Curb-Agajanian Acura NSX GT3 in fourth with a lap of 1:19.820 (114.557 mph). Mario Farnbacher and Trent Hindman, Marks’ co-drivers, can clinch the GTD driver and team championships when the car starts the race on Saturday.

Lamborghini holds the slimmest of margins, one point, over Acura in the GTD manufacturer battle.

All that remains on the 2019 WeatherTech Championship schedule is a 20-minute warmup starting at 9:30 a.m. ET Saturday, followed by the race. NBC Sports has complete coverage, starting at noon ET Saturday on NBC network with the green flag expected at approximately 12:10 p.m. ET.

Coverage shifts to the NBC Sports App and NBCSports.com from 3-5:30 p.m. ET, before NBCSN picks up the broadcast at 5:30 p.m. ET until the race conclusion. IMSA Radio will have live coverage of the entire race on IMSA.com, RadioLeMans.com and SiriusXM Radio