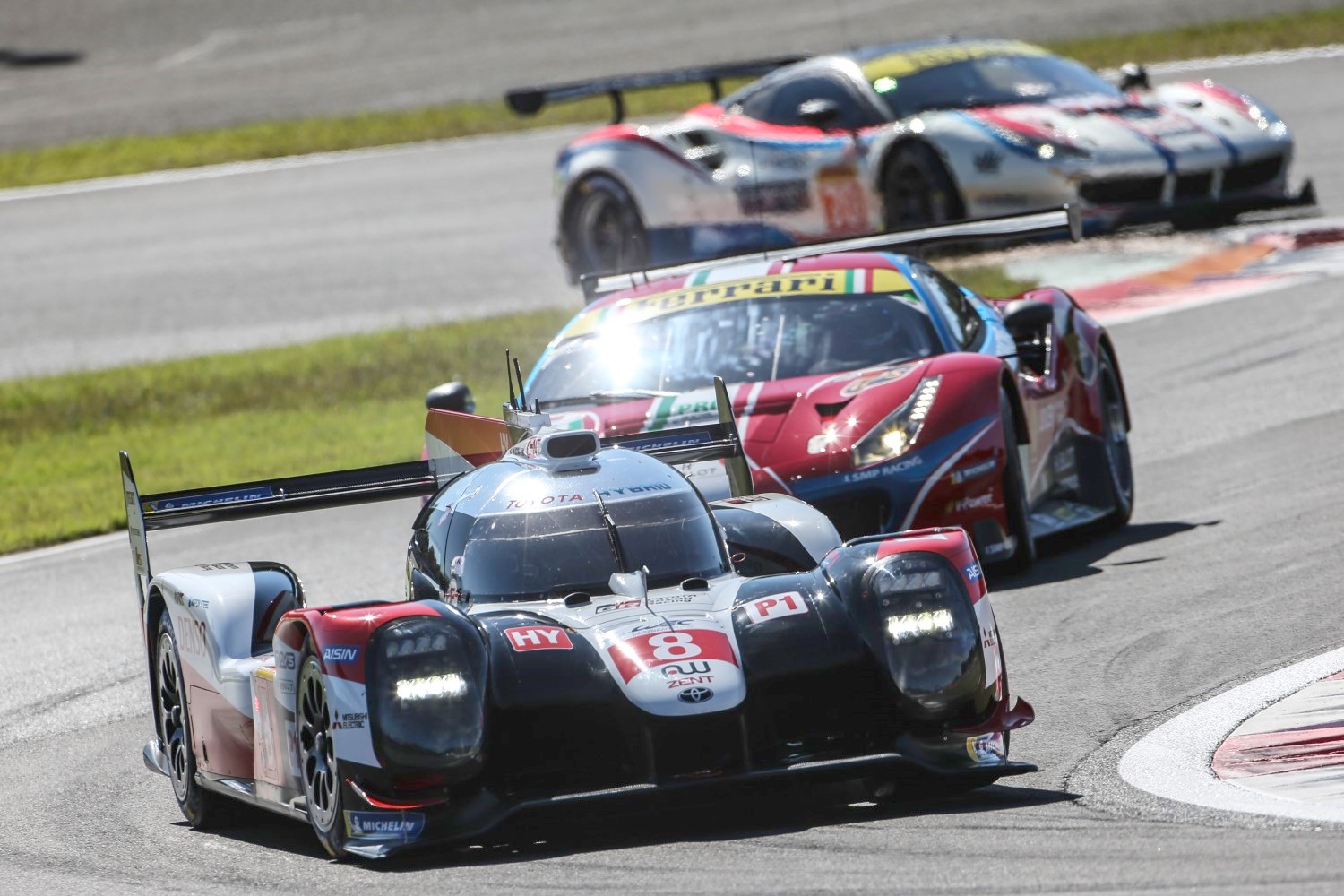 Toyota secured another one-two finish in the Fuji round of the World Endurance Championship, as Sebastien Buemi, Brendon Hartley and Kazuki Nakajima claimed the victory with a 33-second win over the sister #7 Toyota.

After taking an easy pole position with the help of the new LMP1 handicap system, the crew of the of the #8 Toyota TS050 Hybrid took was untouchable en route to a first victory as a trio – with former Porsche driver Hartley scoring his first WEC win since the 2017 Austin race.

The reigning World Champions won at Fuji Speedway for the seventh time in eight years, with the #8 TS050 HYBRID of Sebastien Buemi, Kazuki Nakajima and Brendon Hartley earning victory from pole position.

The new success handicap system was implemented for the first time this weekend, imposing lap time penalties on LMP1 cars based on World Championship position and its effects became clear in the opening laps.

With Sebastien at the wheel, the #8 TS050 HYBRID, which carried a one second per lap handicap, held off a strong challenge from the #5 Ginetta to lead from the start while Kamui in the #7 car, with a 1.4secs lap time penalty, had an exciting fight for second.

Kamui lost out to Rebellion #1 through the first corners but, after a safety car due to an accident involving GT cars, on four consecutive occasions he overtook at the end of the lap only to be re-passed before turn one. That was due to the Rebellion’s 40km/h top speed advantage, a consequence of fuel and hybrid boost restrictions imposed by the success handicap system on the TS050 HYBRID.

Once established at the front, both TS050 HYBRIDs steadily stretched their advantage, helped by the fastest pit work in the field, although the #7 was unable to challenge for the lead due to the 0.4secs-per-lap difference in success handicap.

With two hours gone, late in the first stints of Mike and Brendon, light rain started. An hour later the track surface became too slippery so both cars switched to hybrid intermediate tires, with Jose and Kazuki taking over their respective TS050 HYBRIDs.

When conditions improved enough for a switch to slick tires, the #8 car’s lead stood at around a minute but that was reduced to less than 30secs with two hours remaining when Kazuki was forced to take a drive-through penalty for exceeding the pit lane speed limit.

Sebastien took over the race-leading #8 for the final 90 minutes with Kamui giving chase in the #7. The gap remained stable as the end approached and Sebastien took the checkered flag in the TS050 HYBRID’s final race in Japan, 33.955secs ahead of Kamui. The #1 Rebellion finished two laps behind in third.

The result marked Sebastien’s 16th outright WEC victory, extending his series record, and the fourth time Kazuki has won his home race, while Brendon stood on the top of the podium for the first time as a TOYOTA GAZOO Racing driver.

Following the team’s second one-two finish of the season, the success handicap on both cars will be increased for the next race, the 4 Hours of Shanghai on 10 November, although the lap time penalty will be identical for each car as both TS050 HYBRIDs have the same number of World Championship points.

LMGTE Am
– TF Sport dominated the LMGTE Am category at Fuji after the new Aston Martin Vantage started race from pole
– No. 90 TF Sport car driven by Salih Yoluc, Charlie Eastwood and Jonny Adam finish one lap ahead of No. 83 AF Corse Ferrari 488 GTE
– Team Project 1 (No. 57) secure the third podium spot making it three different manufacturers in GTE Am

Hisatake Murata (Team President): “The whole team is delighted to achieve another one-two victory in our home race. After Le Mans, Fuji is the next most important race of the season for TOYOTA GAZOO Racing so a one-two victory was a big target for us; thanks to everyone in the team who made this possible. Thank you particularly to all the fans who again made the 6 Hours of Fuji such a special race with their passion; all of us appreciate their support. I hope they enjoyed seeing the TS050 HYBRIDs competing for the final time in Japan. Now we go to Shanghai with additional success handicap which should make for a more difficult race but we are looking forward to the challenge."

Mike Conway (TS050 HYBRID #7): “A one-two finish was the goal so I’m happy to achieve that; it’s great for the team to win our home race. We would have loved to win the race with the #7 but it was always going to be difficult. We gave it our all and kept the sister car on its toes all the way through; that was the most we could do. With the changing conditions we had to stay sensible and avoid mistakes, and now we move on to the next one when we will be looking to fight for the win."

Kamui Kobayashi (TS050 HYBRID #7): “Congratulations to the #8 guys and also the team for this one-two win. It was the target for this weekend. I think second place was the maximum we could achieve today in the #7 because we had more handicap than our sister car, but we kept pushing and never gave up hope. In the end, we did everything we could and had a clean race, so I am pleased for the team to get this result and now I can’t wait to have a closer fight in Shanghai."

Jose MarÃ­a LÂ¢pez (TS050 HYBRID #7): “It was a good race and we did what we had to do; we made no mistakes and got the maximum out of our car. Considering the handicap we had a very strong pace and didn’t finish too far behind the #8, but the most important thing was to get another one-two at our home race. The whole team did a fantastic job and we had great support from our Japanese colleagues so thanks to everyone. I am also happy to be part of a one-two in the TS050 HYBRID’s last race in Japan; that is pretty special."

Sebastien Buemi (TS050 HYBRID #8): “I am really pleased with the race and the result today. It’s never easy but we executed a clean race and managed the conditions well, so thanks a lot to the team for their hard work. Of course, it’s even more important to win this race because we have a lot of Japanese fans supporting us and some very important guests, so everyone is very happy. Now we’re equal on points in the championship with the #7 guys so Shanghai is going to be an interesting weekend."

Kazuki Nakajima (TS050 HYBRID #8): “It’s great to win again here in Fuji in front of our home fans; congratulations to everyone in the team. It was important to us to get a one-two in the last Japanese race for the TS050 HYBRID because we have experienced so many emotions with this car. It’s like an old friend so we had to give it a last win at home. It was a tough race in changing conditions but we kept strong pace and were quick on the intermediate tires. We controlled the race and managed the traffic well so I am very happy."

Brendon Hartley (TS050 HYBRID #8): “It’s a really nice feeling to take my first victory with TOYOTA GAZOO Racing, especially to do it on home soil as well. It’s the last time we get to race the TS050 HYBRID at Fuji so to win was great; I’m going to enjoy this moment. We had a pretty clean race and Kazuki did an amazing job on the intermediate tires. We had the advantage over the #7 car with success handicap today but that will not be the case in Shanghai when we can expect a very close race."