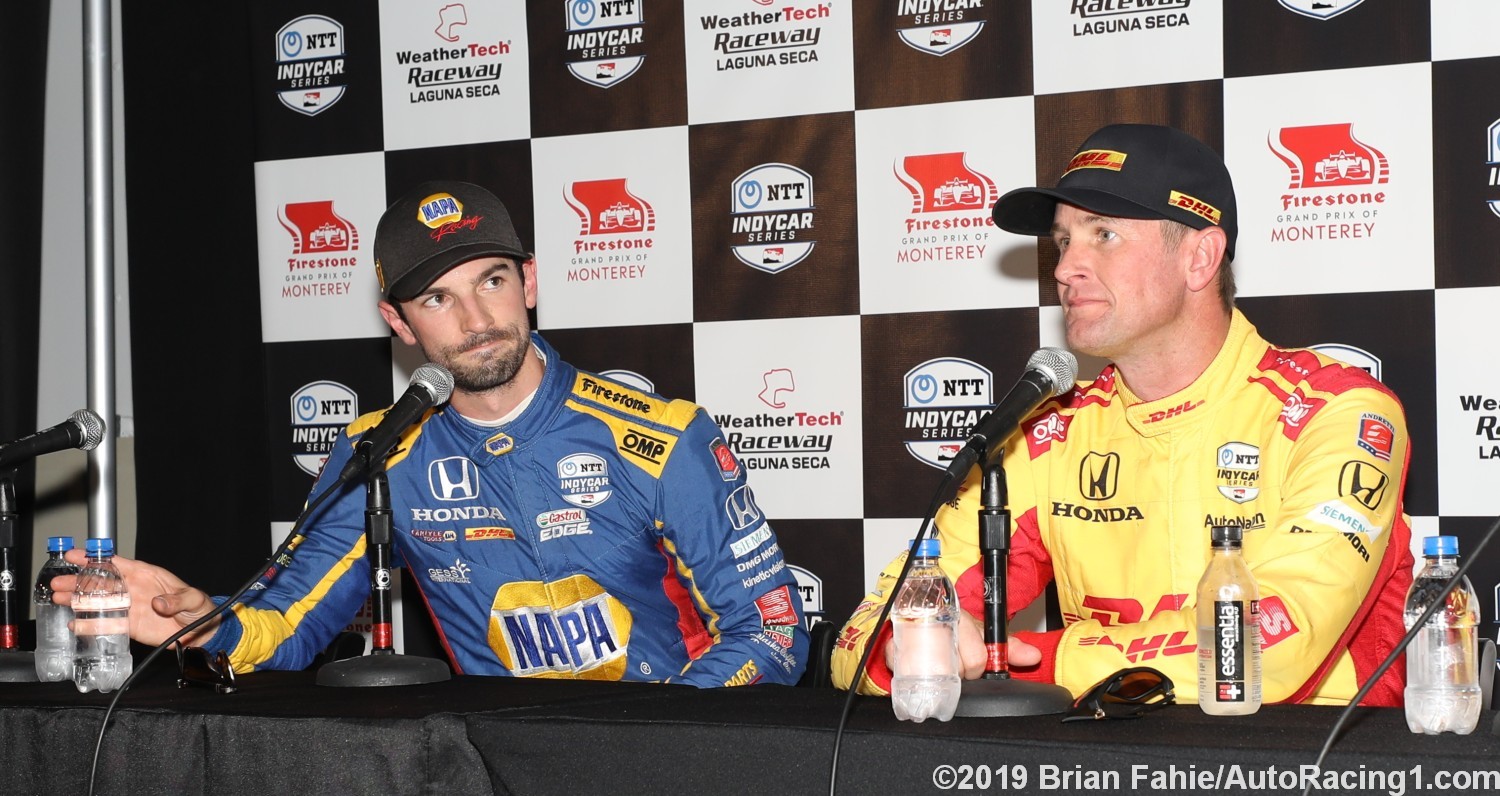 THE MODERATOR: Joined by Andretti Autosport drivers Ryan Hunter-Reay, the fastest driver of today's two practices, actually three combined sessions, and championship contender Alexander Rossi. Let's start with Ryan. Looks like you got a pretty good car and off to a pretty good start. You got a lot of track time. Do you feel like you're ready to go as we move into the important days ahead?

RYAN HUNTER-REAY: Yeah, feeling better about the car. But it's still very tricky out there, very small window to get it all right, so I'm not really resting on this one. I mean, we've got a lot of work to do still, and it's tough out there for everyone. To nail the last, like I said, it's a very small window to get it right, so the margin for error is very, very thin, and like I said, I think we made the car better today as we went through the day, and working with Alex, I think we're headed in the right direction, so hopefully we can put these two cars in the front row.

THE MODERATOR: Alex, I went to try to describe how your day has been. I've seen you a lot on television. How would you describe today?

ALEXANDER ROSSI: Yeah, it's been OK. I think this morning was difficult because we didn't get a lap in on blacks. We kind of sacrificed the second session to try and get as many runs in as we could to find out – go through a checklist, and we saved the new reds for the warmup session, so I think we're getting there. We used yesterday and today to try and run through a lot of things to make sure we leave no stones unturned. I think we've flipped most of the stones. There's a couple more to come tomorrow morning, but we're just trying to make sure we have everything squared away for tomorrow and Sunday.

[adinserter name="GOOGLE AD"]THE MODERATOR: Alex, yesterday Ryan talked about the efforts of car swapping that you guys did and the efforts that the two of you have had working together and the rest of the team, but the two of you particularly, can you describe how that's been for you?

ALEXANDER ROSSI: Yeah, I mean, I think him and I have been kind of joined at the hip for a lot of years now in a lot of ways. We feed off each other really well and work well together, and it's great to have a teammate like that. With how competitive it is, you need to have guys you can rely upon. The first one I go to at the end of every session is this guy, and hopefully we can put two cars on the front tomorrow.

Q. Ryan, there's been a couple of years in your career where you've been able to pull the rabbit out of the hat at the very end of the season and get a victory. Are you going to be able to do it here? Is this a track where you feel like you keep that streak going a little bit of getting a win?
RYAN HUNTER-REAY: I sure hope so. I think it's going to be a track position race. I think tire deg, like I mentioned yesterday, tire degradation will be a big deal, so we'll have to be smart about how we go about the weekend, but qualifying is extremely important, as it always is, and we want to leave here with a win, the 27 with a championship, so we'll do what we can to make that happen. Right now for me I just need to focus on going as fast as we can. But yeah, it's a good start to the weekend, and hopefully we can continue to progress from here.

Q. Ryan, does tricky mean there's no harmony between car and racetrack?
RYAN HUNTER-REAY: I think you mentioned what's tricky about the circuit and everything. I think it's just really low grip, right, so the surface is weathered. The tire compound that we have here, it's all just a tricky package. You're sliding around, and it's rewarding the risk that you take out there. If you take a big leap of faith, you might come through the other end, you might not, but if you make it it's worth a couple tenths of a second. It's tough. You're risking a lot every lap it feels like.

Q. Alex, it was described as a hardware issue in the morning session. Do you have any more details or can you explain what had you get out of the car?
ALEXANDER ROSSI: A bolt broke.

Q. How frustrating is that to have all this anticipation for championship, season finale and then have that happen at the start of the practice?
ALEXANDER ROSSI: It's not. We've got a really good team here and a lot of guys that's been through worse scenarios before. Yeah, I think it's just the fact that you deal with it and there's nothing you can do to change it, so you just have to make the most of the remaining time.

Q. Alex, have you been successful in giving your relatives and your fans the wrong address where you're staying so that you can focus on what you're doing here this weekend?
RYAN HUNTER-REAY: I know where he's staying.

Q. I know you were saying it was important that they don't find out where you're at?
ALEXANDER ROSSI: I don't know if I said that. I think I just said it's a busy weekend, but no, they still don't necessarily know where I am. Captain Butterfly (Hunter-Reay) over here does, though.

Q. If there's one turn that's key to a good qualifying lap here, what is it, or is there more than one?
ALEXANDER ROSSI: Yes. I mean, every corner is really, really hard for some reason. It's just — like even — I'll give you an example. Turn 3 on paper is a basic corner, right, just a 90-degree second gear. It's probably the hardest corner on the track in my mind.

RYAN HUNTER-REAY: It is. It's really tricky. I think the corkscrew seems like a relatively slow corner, which should be something easy, but there's a lot of lap time on the table there, and if you lunge that extra five feet, it could pay off and it could be a half-second slower if it doesn't go perfect. Definitely a tricky corner. I don't think it gets the respect it deserves.

Q. Are there a lot of different approaches to the corkscrew?
ALEXANDER ROSSI: Not line-wise I don't think, but how aggressive you are. Like Ryan said, it rewards a big risk, but you can definitely throw the lap away. It's the same in Turn 6 really. Turn 6 can reward a big risk.

RYAN HUNTER-REAY: Yeah, all the corners feel like you can get lap time if you risk going in a bit deeper and challenging a bit more, but the chances are it's not going to pan out, but in qualifying you've got to go for it, so…

Q. Alex, where do you stand right now as far as tire degradation? I think Josef said it was one of the worst he's dealt with compared to other tracks.
ALEXANDER ROSSI: I'd probably agree with that, yeah. You know, I think the reds — we got to be on the Firestone red tire for the first time today, and that's definitely a stronger tire. I think deg is going to be a big issue on both compounds. It's just trying to understand which one you're going to want to try and be on for the race, whether a used red can make it. So that's kind of the similar conversations that we have every weekend. But the magnitude of the deg I think is higher than we've seen probably since Sonoma last year. I mean, I'd say here and Sonoma were probably on the same level.

Q. Alex, we saw you practice a kind of out-of-gear run from corkscrew down to pit lane. You just talked about tire deg. Would it be feasible to do only a two-stop strategy?
ALEXANDER ROSSI: It's feasible, yeah.

Q. They could run you out of fuel and you'd still make it down the —
ALEXANDER ROSSI: Well, we did, so yeah. In theory.

Q. But the tire deg would allow you — it's still OK enough for you to do a two-stop strategy?
ALEXANDER ROSSI: I don't want to mislead anyone. So we ran out of fuel, so in order to not like hurt the fuel pumps you just turn it off. So we weren't intentionally really doing anything. But that would be clever if we were. Don't put it past us. We've done stuff like that in the past.

Q. It wasn't like Mid-Ohio in 2018, then?
ALEXANDER ROSSI: It was not, no. Just looking after the equipment, that was all.