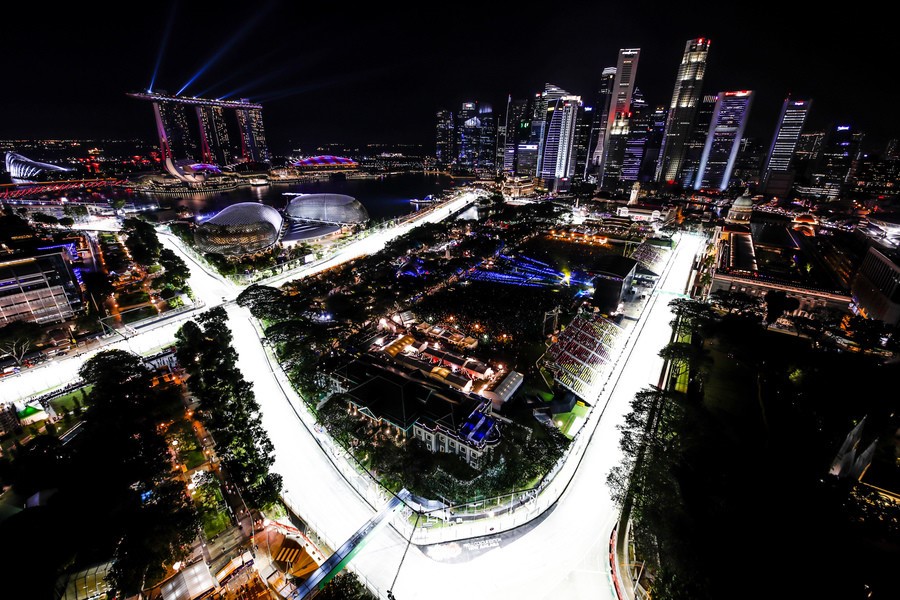 From the flat-out straights of Monza, Formula 1 now leaves Europe for the remainder of the season and heads to its only full night race: Singapore. For the street circuit with the most corners of the year (23) the three softest compounds in the P Zero Formula 1 range have been chosen: C3 as White hard, C4 as Yellow medium, C5 as Red soft. The stop-start Marina Bay layout is renowned for its low-grip conditions, with teams running high downforce to help increase cornering speeds on the second-slowest lap of the year after Monaco.

The Marina Bay Street Circuit is one of the most physically demanding on the calendar; its tight and twisty nature combined with high humidity provides a stern test for both car and driver. Racing under the glare of thousands of floodlights through the center of the vibrant city-state, it is no surprise that the Singapore Grand Prix has established itself as one of the most anticipated races of the year.

[adinserter name="GOOGLE AD"]Toto Wolff:
We came back from the summer break knowing that the first two races would be difficult for us. We ended up with two double podiums and 67 points which was a strong form of damage limitation and more than we expected. However, you could tell in the debriefs that Spa and Monza left us not satisfied and everyone in Brixworth and Brackley is pushing hard for more victories.

The next race takes us to Singapore, a spectacular night race set and a great showcase for our sport. The offset schedule and the climate make it a demanding weekend for the team; temperatures in the garage can easily reach 40 degrees Celsius or more with high humidity levels as well. It's a tough environment to work in and it's equally challenging for the drivers and the car itself.

For a long time, Singapore used to be one of our weakest tracks, but we've made some inroads into that and performed well last year. However, there are no home runs at a track like Singapore: we need to understand this car and this year's tires on a very particular track layout and take absolutely nothing for granted in our approach to the weekend. We are looking forward to a tough battle under the lights in Singapore

Lance Stroll:
“Singapore is probably the most demanding race on the calendar – certainly in terms of the physical side of things. To prepare for it, I do lots of training in the heat and endurance work. It’s a long race – lasting about two hours – so it’s a mental test of concentration as well. It’s narrow and, with the walls so close, there’s no room for mistakes. It’s a place where you put a wheel wrong and you’re in the wall. It really tests you as a driver.

“There is a really nice flow to the lap. It’s technical and very long, so hooking up the perfect lap is a challenge. You need confidence in the car and a balance that suits your driving style. To find the last few tenths, you really need the confidence to push. It’s quite a bumpy track and you have to be fully committed over the curbs, so it’s a race where you’re really beating up the car. I remember having a pretty big headache after the race last year!

“The lights above the track are impressive. They are so bright and I still use a dark tinted visor. It’s a really spectacular sight when the track is all lit up. It’s one of the races that everybody wants to attend. To drive through those streets at night with all the lighting and the fireworks at the end feels really glamorous.

“It’s an odd one for your routine because we stay on European time, so you’re going to bed at three or four in the morning and waking up at midday. It’s different but luckily we have blackout shades at the hotel. As long as housekeeping don’t come knocking on your door at ten in the morning you’re usually all good."

Sergio Perez:
“Spa and Monza were not easy weekends, but we scored important points and it feels as though my season is properly underway now. The hard work at the factory is paying off and we are doing a good job at the track too. There’s a great feeling in the team just now: a nice atmosphere and excitement about the rest of the year.

“I always enjoy racing in Singapore. The city has so much energy and the track is a challenge. It’s physically difficult with the heat and humidity and, because it’s a street circuit, there’s little margin for error. When you’re driving, you’re sweating so much. That’s why you need to make sure you’ve done your fitness training in hot conditions too. You need to be ready because it’s hard to breathe sometimes. It’s also the longest race of the year in terms of duration.

“We stay in hotels next to the track and you really feel so close to everything. You walk to the track with the fans and you get to feel the buzz and atmosphere in the city. That makes it quite different from other races too. It’s a great place to have a race and when the sun sets the track looks really beautiful under the lights.

“I’ve had some good drives in Singapore over the years. It’s a track layout I like and I have always enjoyed street tracks. You have to be aggressive and accurate and it’s a track where you can make the difference as a driver."

Pierre Gasly:
“The two topics everyone talks about in Singapore are the heat and the fact it’s a night race. It definitely makes it exciting as the conditions are much tougher.

“The lap runs at a very high pace with loads of corners, so you don’t pause for breath. But I like that. I love very technical, twisty tracks where you have to get into a rhythm.

“Maybe it’s the most difficult race of the season, but it’s also the most exciting."

Daniil Kvyat:
“It's a big challenge, one of the most demanding races of the year from many perspectives as it's very long and in hot and humid conditions, which is why it is so interesting and exciting for the drivers.

“Street circuits have been good for us in the past and this year we were competitive in Monaco, so we will be trying to put everything together and fight for points."

Frederic Vasseur, Team Principal Alfa Romeo Racing and CEO Sauber Motorsport AG:
“Singapore is a weekend that asks a lot from everyone in the team. The humidity, the heat, the weird times – it’s a tough weekend but our team is ready for the challenge. We have shown we can be competitive everywhere we go and there is no reason we shouldn’t be in the mix this weekend, but we will need to do a proper job. The margins in the midfield are very small, even on a relatively long lap like in Singapore, and every detail makes a difference. We need to avoid mistakes and put both cars in a position to fight for the points."

Kimi Raikkonen (car number 7):
“Spa and Monza didn’t go well, but that’s in the past. Everyone is talking about the humidity in Singapore and racing at night, but in the end it doesn’t really feel too different than any regular racing weekend. Our objective for this race doesn’t change: we need to do a good job in each session as that’s the only way to be at the front of a competitive midfield."

Antonio Giovinazzi (car number 99):
“The result in Monza was a big confidence boost and I am looking forward to another good race in Singapore. Racing in the night is always special, although in the car you don’t really feel it as much. The Marina Bay track is a challenging one, with so many corners and very little margin for error; the conditions also contribute to making this race hard. But I feel I am well prepared and I am eager to get back in the car."

Mario Isola (Pirelli):
"It is hard to think of a bigger contrast to Monza than Singapore, so the teams will have a significant reset as we head into the final long-haul leg of the season. The unique challenges of Singapore are quite well known to them though, so they will have a good idea what to expect as they dial themselves into the track on Friday. We've seen in the past that there is scope to vary the strategy, and with overtaking quite tricky at Marina Bay, teams will be carefully assessing the ways in which they could potentially take advantage of strategy to move up the order. Especially considering the very high likelihood of safety cars there, which can change the complexion of a race. It is going to be interesting to see if anyone tries to qualify on the medium rather than the soft, to add flexibility to the strategy, given all the variables. There are some quite different tire choices among the drivers, so we might see some alternative approaches".