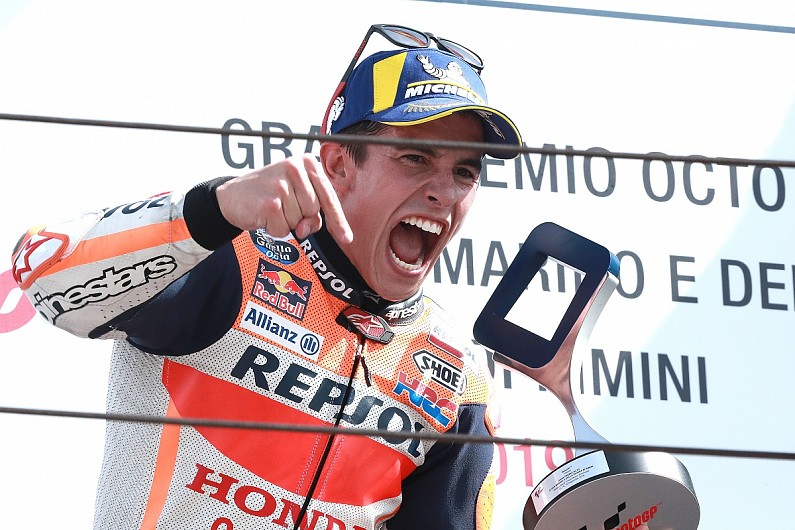 “Honestly speaking, yesterday was the extra motivation [after the Rossi incident]," an elated Marquez said.

“Really nice to win here in Italy, but even nicer to have a 93-point lead in the championship."

Quartararo was gutted, but nevertheless happy to push the world champion all the way.

“Was a tough race. I give my 100 percent, I think I make a good race," Quartararo said.

“Marc had two times the experience of the last lap.

[adinserter name="GOOGLE AD"]“I can say that was the best moment of my career fighting with a seven-time world championship. So was a great moment."

Vinales was on pole and the Spaniard made it count, keeping the lead heading into Turn 1 as third place Fabio Quartararo (Petronas Yamaha SRT) grabbed P2, with Pol Espargaro (Red Bull KTM Factory Racing) losing positions at the start. Franco Morbidelli (Petronas Yamaha SRT) found himself in P3 with the sluggish starting Marquez giving himself work to do. But that’s exactly what the seven-time Champion did, grabbing third from Morbidelli at Turn 8 as the leading trio throughout the weekend found themselves 1-2-3 on Lap 1.

And sure enough, the trio started to stretch away. The gap on Lap 2 was already up to 0.7 over Morbidelli and it was Vinales leading the way, but not for long. Quartararo was right behind his fellow Yamaha rider and getting a good run out of Turn 10, the Petronas grey and blue dived underneath Monster Energy black and blue as a rookie led at Misano. Marquez wasn’t going to waste any time, Lap 3 saw the 93 set the fastest lap of the race as Quartararo started to pull away.

Seeing this, Marquez dived under Vinales at Turn 10 on Lap 4 and locked his radar onto a rapid Yamaha at the front, with the third-place Yamaha of Vinales struggling to hold the pace. Further back, Espargaro was frustrating Alex Rins (Team Suzuki Ecstar), Valentino Rossi (Monster Energy Yamaha MotoGP) and second in the Championship Andrea Dovizioso (Ducati Team) for P5.

Back up front, Quartararo had a 0.8 lead as Vinales slipped to 1.5 seconds back on Lap 6. Quartararo’s lead wouldn’t stay above half a second for long though, the Repsol Honda reeled the Petronas Yamaha in as the reigning World Champion and MotoGP™ rookie faced off. Unexpectedly, Vinales was now out of range. The gap to Marquez and Quartararo was nearly three seconds – what was going on for one of the weekend’s leading contenders?

In the battle for sixth, Rins was given a long lap penalty shortly after finally dispatching Espargaro’s KTM. But then, it didn’t matter for the Silverstone winner. The Suzuki man was down at Turn 4, while further up the road, Rossi was hitched onto the back of compatriot Morbidelli. At the front, Quartararo was faultless. There were no signs of the 20-year-old buckling under the pressure from a seven-time Champion as the gap between the two remained at 0.2.

The laps ticked by and still there was no change. Marquez was fierce on the brakes coming into Turn 10, but ‘El Diablo’ was a demon at picking the bike up onto the straight. There was simply nothing splitting Quartararo and Marquez, with Vinales at this point now closing the gap ever so slightly to the leaders. Surely it was too late for the Spaniard? Into the final 10 laps, still nothing. No hint of an overtake from Marquez, no signs of a mistake from Quartararo. Lap after lap, the consistency was frightening as Vinales got the gap down to two seconds. There was a sense of inevitability in the air as we headed onto the final five laps, but we’d have to wait until the last lap before Marquez pounced.

firing it onto the start/finish straight, Marquez had the run on Quartararo and led into Turn 1. Quartararo got a good run out of Turn 2 and Turn 3 though as the rookies bit straight back. Into Turn 4 they went, Quartararo was back at the summit but the back straight and Turn 8 provided a golden passing opportunity. Marquez, late on the brakes, smoke coming off his boot, somehow got it stopped into the left-hander – changing of the guard once more. Now it was Marquez’ to lose.

No way through for Quartararo at Turn 10, but the Yamaha got a good run down through Turn 11 and 12. The Frenchman was right behind Marquez at the tight left of Turn 14 approached. Marquez went defensive and was slow mid-corner. Quartararo tried to cut back but there was no way through, the Yamaha almost touching the rear wheel of Marquez. Subsequently, Quartararo had to sit up, which meant it was game over. Marquez returned to winning ways after two consecutive P2s to win on enemy territory, overtaking Mike Hailwood’s Grand Prix win record in the process.

Quartararo was understandably disappointed after such a titanic performance, but the rookie’s time will come. Vinales didn’t quite have enough on Sunday afternoon for Marquez or Quartararo, but a fifth podium of the season continues his consistent form of late to edge clear of teammate Rossi in the Championship.

Speaking of ‘The Doctor’, it wasn’t a home GP podium Rossi would have been looking for, but a great fight with close mate Morbidelli and a third consecutive P4 shows signs the nine-time World Champion isn’t far away from returning to the rostrum. For Morbidelli, a strong and consistent weekend ends with a fourth P5 of the year for the Italian, who took the checkered flag just a tenth off Rossi. All four Yamahas inside the top five as Misano is promising for the Iwata factory.

Dovizioso could do no more than sixth at the venue he won at last season, he now sits 93 points adrift of Marquez as Ducati suffer on home soil. On the other hand, Espargaro’s P7 was just reward for KTM’s continued hard work as the Austrian factory enjoy a very successful weekend at the San Marino GP. Upon his return from injury, Joan Mir was the sole Team Suzuki Ecstar finisher in P8, with Pramac Racing’s Jack Miller recovering from P16 on the grid to grab ninth ahead of fellow GP19 rider Danilo Petrucci (Ducati Team) in P10.

Marquez vs Quartararo: something we should start getting used to as Misano is just the first installment of what could become one of the all-time great rivalries. For now, Marquez has the bragging rights and the number 93 heads to his home Grand Prix at MotorLand Aragon with 93 points over his rivals. Can anyone beat Marquez on Spanish soil next week? Quartararo will be fired up to do just that.

A 77th career victory makes Marquez the fourth most successful rider in Grand Prix history, bringing fans to their feet on his way to winning a thrilling San Marino GP as Jorge Lorenzo claimed more points.

Marc Marquez made a flying start to the race and moved to fourth by the first corner, quickly progressing up to third just a few corners later. Muscling past ViÃ±ales on lap four, the World Championship leader set about closing down the almost one-second lead of Fabio Quartararo. The Frenchman’s advantage was soon reduced to just two tenths, Marquez electing to wait for his moment to attack. As the laps ticked down, the reigning champion began to edge closer and put increasing pressure on the young French rider.

The start of the last lap saw Marquez’s RC213V roar past Quartararo heading into Turn 1, the pair briefly sparring before Marquez made the move stick later in the lap. Crossing the line 0.903s ahead of Quartararo, Marquez returned to the top step of the podium after back-to-back second place finishes. The win moves him 93 points clear of title rival Andrea Dovizioso in the MotoGP World Championship standings with six races remaining. Taking the 77th win of his career, Marquez also moves ahead of Mike Hailwood to cement himself as the fourth most successful rider in Grand Prix history.

Honda leave Misano extending their advantage in the Manufacturer Championship to 60 points over closest rivals Ducati while the Repsol Honda Team close the deficit to the Ducati Team in the Team Championship to just 25 points. With Round 14, the Gran Premio Michelin de Aragon, taking place on September 22 the Repsol Honda Team are keen to carry their momentum forward as they return to Spanish soil.

“Honestly speaking, I knew it wasn’t necessary to win because I saw that Rins was out and Dovizioso was far from us but I had some extra motivation. I just tried to stay with Fabio as close as I could and in the end I was weighing up whether to try or not. On the last lap I decided to go. I knew Fabio was very fast in Sector 3, so I made my move before that and closed the corner as much as I could. Fabio rode a very strong race today. I raced as smart as I could and in the end it is nice to win in Italy, but even nicer to have 93 points of advantage."