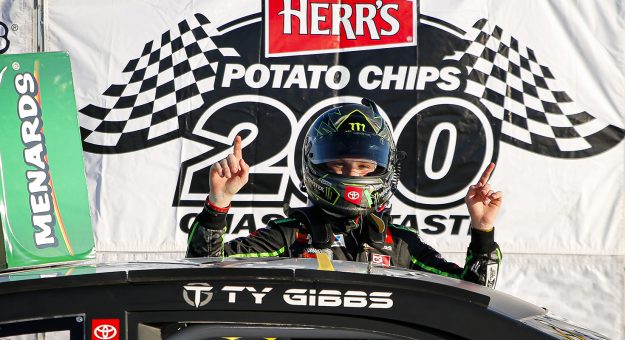 Ty Gibbs wasn’t going to settle for anything less than a win.

The 17-year-old from Charlotte, North Carolina, held off Sam Mayer in a two-lap overtime sprint to win Saturday’s Herr’s Potato Chips 200 presented by Federated Car Care at Toledo Speedway. It was his first ARCA Menards Series East win and fifth in the last two years between the ARCA Menards, East and West series.

The victory came in the first race back for ARCA Racing since Phoenix Raceway in February due to the COVID-19 Pandemic.

Gibbs didn’t forget, during the layoff, that he led 122 laps at Phoenix only to end up third after a series of late cautions. Nor did he forget about his runner-up finish at Toledo last year, one of eight career runner-up finishes across the three series.

"It’s really good to come back out here and get a win," said Gibbs. "I was able to move up a spot, which is always a fun time."

Gibbs qualified third but quickly put the No. 18 Monster/Terrible Herbst/ORCA Toyota in front. He lost the lead to Mayer in a three-wide battle with a lapped car as they came to the first of two scheduled breaks on Lap 75, but held off Mayer in a fierce battle before the final break on Lap 150. A late caution set up a third round, which went to Gibbs again.

"I had a fun time out there racing; I learned a lot," said Gibbs. "A little bit of drive off, I thought I was pretty loose there and that’s what hurt me and where (Mayer) was a little bit faster. Once my guys fixed that, it was still a little loose and I had to work for it which is always good. I had a good learning experience today."

Mayer, the defending East champion, holds a two-point lead over Gibbs in the championship race. Sanchez is 13 points back in third.

The Herr’s Potato Chips 200 presented by Federated Car Care will air on NBCSN on Thursday, June 18 at 3 p.m.