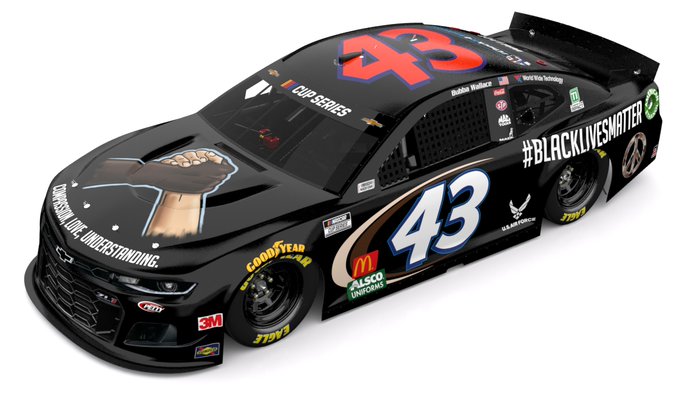 NASCAR driver Bubba Wallace, the sport’s only full-time black driver, will race this Wednesday at Martinsville with a #BlackLivesMatter paint scheme on the No. 43 car he drives for Richard Petty Motorsports.

The car will be painted black with the image of a black person and white person shaking hands on the hood. It will also have #BlackLivesMatter written out on the quarter panel.

Richard Petty Motorsports explained their reasoning for the color scheme in a video. The team claims that the Blackout Tuesday played a major role in deciding to go with the all black look.

We knew the Martinsville race was open. We did not sell sponsorship for that, and it sparked and idea of: Why not run a blackout car? And I was like, ‘Absolutely, that would be incredible.’ Our team brought that idea to me, and I jumped all over it. And we had further conversations of, ‘Let’s make a statement behind it and run a foundation or a charity [on it] that’s helping push the narrative and the initiative of what’s going on in the world today, racial inequality. Let’s find somebody that aligns with that.’ And why not dive straight to the root and putting #BlackLivesMatter on the car? Most powerful hashtag going around, I feel like, especially these last couple days, last couple months really.

‘And it’s true: Black lives do matter. It’s not that we’re saying, ‘No other lives matter.’ We’re trying to say, ‘Black lives matter, too.’ If we put ‘t-o-o’ on the end, I think a lot more people would understand it. We want to be treated equally and not judged off our skin color and the actions that we get to ensure are based off of our skin color. It’s different, so that’s what we’re trying to get across.

‘We want to be a part of this nation as one and come together as one. But we always say, ‘All lives will not matter until black lives matter.’’

Wallace took over the No. 43 car for Richard Petty Motorsports after Aric Almirola moved on from the team in 2019. NASCAR takes to the track again on Wednesday in Martinsville, Virginia.