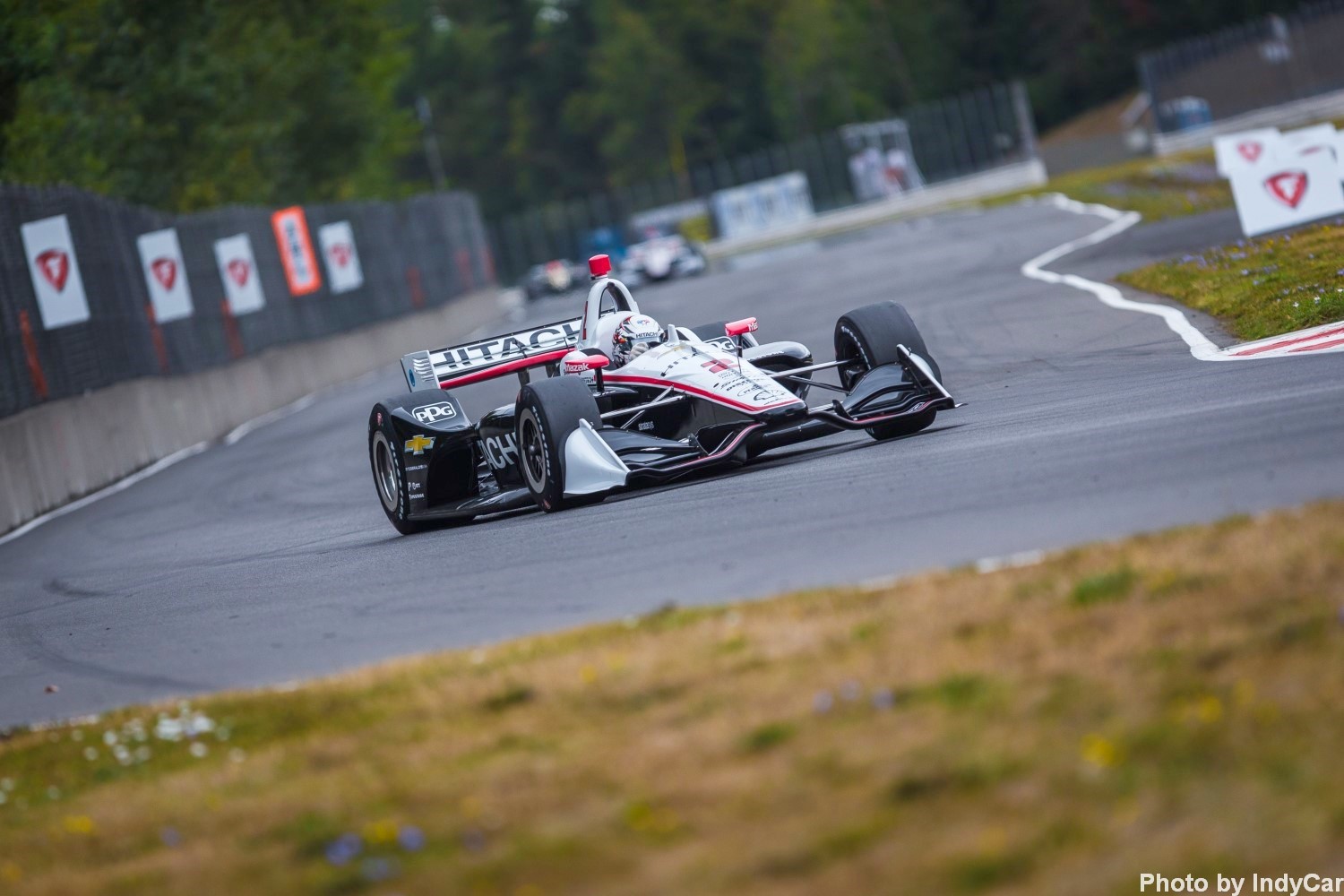 Josef, you got a 38-point lead on your teammate. 38 points is an advantage that hasn't been overcome since 2008, at least. You feel comfortable, confident?

JOSEF NEWGARDEN: What about Dixon? I feel like that was way more than 38 points. I felt like I was 85 with two to go. Where was he in the finale?

THE MODERATOR: Are you comfortable?

JOSEF NEWGARDEN: No, no, absolutely not (laughter).

Look, the double points scenario, it's double points. It's a lot of points in the finale. 38 points is not a lot.

[adinserter name="GOOGLE AD"]THE MODERATOR: Alexander Rossi from Andretti Autosport. I talked to you yesterday, asked how confident you were. You said very confident. You're still in this. You feel good about it?

THE MODERATOR: We're off to a roaring start here. How about let's just take questions.

Q. Josef, at any point do you feel this is your championship to lose?
JOSEF NEWGARDEN: It's probably fair to say that, yeah. I would say it is because we're in such a favorable position. I don't think it's a secure position, but it is the favorable one.

If we lose it, it probably would sting a bit more. If you are 38, 48 points back, I think it stings less. It sucks either way. But if you lose it with a bigger advantage, then yeah, I think it just stings a bit more.

Q. Obviously on the NASCAR side, they're doing their team debriefs together, exchanging notes, wide open. Do you have the same thing teammate-wise? Are you and Simon in the debriefs talking about it? Will that change this weekend or Laguna Seca?
JOSEF NEWGARDEN: Good question. I think it's actually a lot closer than NASCAR. The team interaction, in my opinion, you couldn't be closer. We are one unit. We sit all next to each other. All the engineers are together. We don't have separate trucks. We are one unit.

That's how we operate at Team Penske. But I think a lot of teams in IndyCar and open-wheel operate that way. I don't think you'll find big differences.

But we're for sure team first. What's good for one is good for all of us. Yeah, you don't hide anything. I mean, you see it pretty crystal clear, what everyone is doing in the group.

THE MODERATOR: We welcome to the press conference from Ganassi Racing Scott Dixon.

How do you feel about this, Scott, 70 points back? Do you feel you're in a must-win situation?

SCOTT DIXON: Yeah, I'd rather be 70 points ahead. It's kind of a bummer after last weekend. I think it could have been a good opportunity. Car felt decent. To have something small like that take us out…

That's racing. We'll just get on with it. It's nice not to have to worry about points, that scenario. Kind of just get after it, try to have a good weekend, see what happens in Laguna.

THE MODERATOR: You didn't have a clean one in the first lap last year. As dusty and dirty as it gets, maybe this is your lucky place.

SCOTT DIXON: That would be nice. I think if you have somebody see have a start of the race like that, it typically bodes well. If somebody changes their front wing three times, they end up winning the race. For us, it was one of those things.

Luckily we kept the caring running, got lucky on some yellows. We definitely had an adventurous race last with the issue with the car on pit speed, which granted us a nice drive-through penalty as well.

I don't know, again, we'll just try to have a clean weekend.

Q. Josef and Alex, you have been in a championship battle before. How much stronger did those experiences make you or are they not really relevant this year?
JOSEF NEWGARDEN: I know Scott knows nothing about this as far as experience going through it. I think Alex and me have learned a lot the last couple years on how to tackle this. No, I'm just joking (laughter).

You get better every year. I think there's something to be said about experience in this sport. It doesn't mean you can't be good as a rookie, but there's so much diversity to IndyCar, and you have to switch back and forth between so many disciplines. I think the more you do it, the better you get at it.

It helps. It helps having that experience in the bank when you have to go through a couple weekends and be on it, different disciplines.

ALEXANDER ROSSI: I would agree with that. The only thing I'd add is as you move further into your career, hopefully you have a bit of continuity. When you have that continuity, you have things go poorly, you know you have the people around you to kind of diagnose and understand. It's not a reactive situation.

In the beginning when you're all still kind of new working together, you have something go sideways, it is easy to get trigger happy on what you're doing. I've been fortunate enough to have this group for a while. We had two bad weekends in a row. The approach and philosophy and mindset is still the same. Everyone is calm, just trying to go out there and attack and hopefully pull it off.

THE MODERATOR: We welcome to the press conference Team Penske's Simon Pagenaud.

Simon maybe more important than the points you gained on Josef last week was that you advanced a position. You now have even maybe greater control of your destiny, one person to climb over as opposed to two or three.

SIMON PAGENAUD: The only control over my destiny is to do the best I can. It doesn't really matter what Josef or Alex or Scott do. It really is about my own performance.

I'm really focused on that, focused on being in the moment as much as possible. We'll see what we can do. The car felt much, much better today. Step by step we'll get the little details and get quicker and quicker as a team.

I'm pretty excited about this weekend. It's really awesome to be at in point of the season, last two races, four guys in the championship, it's really exciting.

Q. Did you borrow Helio's hair gel?
SIMON PAGENAUD: I go to his barber every Monday after the race. It's working (laughter).

Q. Alexander, you tested here earlier this month. Does that help you? Did you roll off better than you thought you would? By the weekend does it all even out?
ALEXANDER ROSSI: Well, it's not a bigger advantage than we thought we'd have. You hope you do your research. You hope it applies. These Firestone tires are very sensitive to track and ambient conditions. You never know really if what you do in the test is going to apply 100% on the race weekend.

I think we had a good, strong first session. The level in this field, as we always talk about, you just kind of alluded to, towards the end of the weekend it becomes null and void.

It certainly helps being on that side of things instead of being on the back foot trying to recover Friday night going into qualifying Saturday.

But at the end of the day I also think each team chooses when and where they test. I think we gave up some performance at tracks where other teams have tested. It all comes full circle at the end of the year. For us, it might just come later.

Q. This is for Josef. Last year you were able to find ways to get by at the chicane. Where do you feel at this point qualifying is, being in the middle may not be ideal?
JOSEF NEWGARDEN: You can't predict it. Some days it's the right ingredient to be on pole. Nothing happens from a strategy standpoint that affects that and you want to be starting first. Some days you could start 20th and that ends up being the better position to start in. It's hard to predict. Sometimes it falls that way, sometimes it doesn't.

I think if you're on pole, you hope it's going to be a pretty clean day. If you're in the back, you hope something favors you. I'm telling you, it's hard to predict.

A lot of these races go full green now. You get the oddball in there with a bunch of yellows, trying to pick out what that race is going to be is just impossible.

I think the safe thing is to qualify as high as possible, run your race, and hopefully nothing takes away from that from a yellow standpoint.

It is what it is a lot of the times. We've benefited from it for sure. There's times that it bit us. That's what IndyCar racing is nowadays.

Q. Are mind games in INDYCAR effective? There's no tension, where on the NASCAR side they have that. Why is that?
ALEXANDER ROSSI: They can fire each other off, right?

ALEXANDER ROSSI: You don't see it.

JOSEF NEWGARDEN: We act like we're all friends right now but secretly… Maybe this is a mind game the way I just answered that. Think about that (laughter).

THE MODERATOR: I don't know how we follow up on that one. Scott?

Q. Scott, your team tested here, you did not, but you were here on-site. Was that difficult to watch somebody else basically do the testing that you would like to do?
SCOTT DIXON: It was actually really interesting. It was the first time I'd been to a test and not been driving. I got to watch Alex and a few others, see some different things. It was kind of nice to do that and help Oliver (Askew), as well, who did a great job.

Yeah, it was interesting from that standpoint, but not really helpful I think as far as testing for an individual car or anything like that. But I think it's always beneficial for the team to run whenever they can.

THE MODERATOR: No further questions or mind games, class dismissed. Thank you.