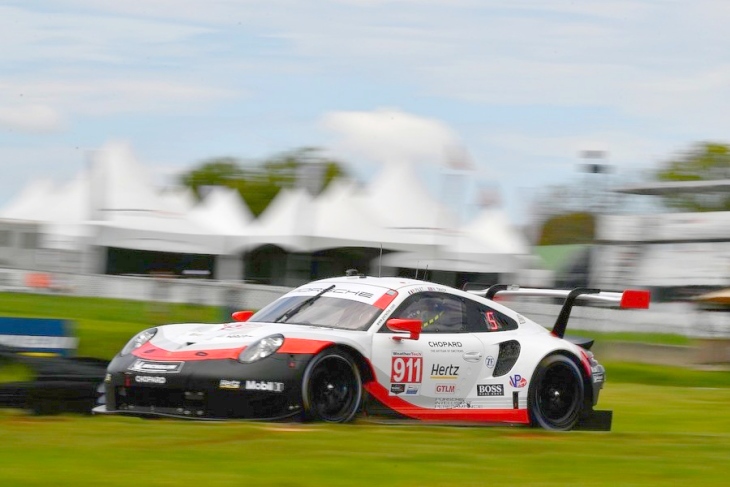 With its seventh win of the season, Porsche has secured the 2019 IMSA Weathertech Sportscar Championship GTLM Manufacturers’ title. The German marque did so in dominating fashion with a weekend sweep at Virginia International Raceway that saw a Porsche 911 RSR lead Free Practice 1, 2, and 3, score pole position in Qualifying and claim a 1-2 finish after two-hour and forty minutes of racing.

The #911 Porsche 911 of Nick Tandy and Patrick Pilet took home the win and stood up to constant pressure from their teammates in the #912 Porsche crossing the finishing line just 0.737 clear of the sister #912 Porsche of Laurens Vanthoor and Earl Bamber.

Corvette, Ford, and BMW could not manage a serious challenge to Porsche as the #911 Porsche and #912 Porsche ran away from the field all weekend. The two Porsches swapped the lead on two occasions, both times in the pits, including on the final stop that saw Tandy leapfrog Bamber.

A late Full-Course Yellow bunched the field but Tandy stayed poised, kept Bamber behind him, and redeemed himself from a crash in qualifying to guide Porsche to their manufacture’s title.

“It’s a perfect day we had a tough qualifying for Nick [Tandy] … but I told him to never give up and he did an excellent job." Said Pilet, who became the winningest GTLM driver in IMSA since the 2014 merger with 12 wins.

Bamber and Vanthoor in the #912 Porsche came home in second after starting from pole. They finished 2.538 seconds clear of the #3 Corvette C7.R of Antonio Garcia and Jan Magnussen. That gap of almost three-seconds created in under 10 minutes is perfect evidence to the speed that Porsche had on the field all weekend.

It was finally Mercedes-AMG’s turn atop the IMSA WeatherTech SportsCar Championship podium in 2019 and on Sunday at VIRginia International Raceway.

The No. 33 Riley Motorsports – Team AMG Mercedes-AMG GT3 of Jeroen Bleekemolen and Ben Keating scored their first victory – and podium – of the season in the GT Daytona (GTD) at the 3.27-mile circuit in Alton, Virginia.

In fact, it was the first podium of the season for the manufacturer in GTD and the first win for Bleekemolen and Keating since winning at Canadian Tire Motorsport Park last July.

“Golly, this has been a long time coming," said Keating. “We’ve have had a great, car, a great team, and everything would have gone so well from a performance standpoint all season, and then we’d have the worst of luck. Today was almost the complete opposite."

[adinserter name="GOOGLE AD"]The win came as a result of a slightly different pit strategy than the rest of the GTD competitors. The team chose to pit two laps earlier than the leaders to save time on pit lane and save fuel on track.

Bleekemolen was third following the midrace handoff from Keating and with two laps on the tires, passed the leading No. 86 Meyer Shank Racing Acura NSX GT3 of Mario Farnbacher and the No. 9 Pfaff Motorsports Porsche 911 GT3 R of Scott Hargrove, fresh off pit lane on cold tires.

“Mario did an unbelievable job on the first lap," said Keating. “But coming out of (the) Oak Tree (Turn), he went wide and it’s a pretty rough ride on the outside of there, and that allowed Jeroen to get a bit of a run all the way going down the back straight. From that point in time, once you have the position of being in the lead, it’s a little bit easier to save fuel. And this is one of those tracks where you can save fuel if you’re not really fighting hard for position."

The win also capped off a special weekend for Bleekemolen, who competed in a late model race at the South Boston Speedway on Saturday night. Ironically, the GT Le Mans (GTLM) class winners on Sunday – Nick Tandy and Patrick Pilet in the No. 911 Porsche GT Team Porsche 911 RSR – also were in attendance as spectators.

Farnbacher and co-driver Trent Hindman held on for second place by .566 seconds to expand their championship lead to 37 points over Zacharie Robichon, Hargrove’s No. 9 Porsche co-driver. Robichon currently leads the duo by one point in the WeatherTech Sprint Cup, which reaches its conclusion following the upcoming race at WeatherTech Raceway Laguna Seca.

Rounding out the GTD podium was the No. 63 Scuderia Corsa WeatherTech Racing Ferrari 488 GT3 of Cooper MacNeil and Toni Vilander, who made a last lap pass on Hargrove for the third position and the team’s third podium of the year.

Next up for the WeatherTech Championship is the penultimate round of the season at WeatherTech Raceway Laguna Seca on Sunday, Sept. 15. The two-hour, 40-minute race with all four classes will be televised live on the NBC network beginning at 3 p.m. ET.