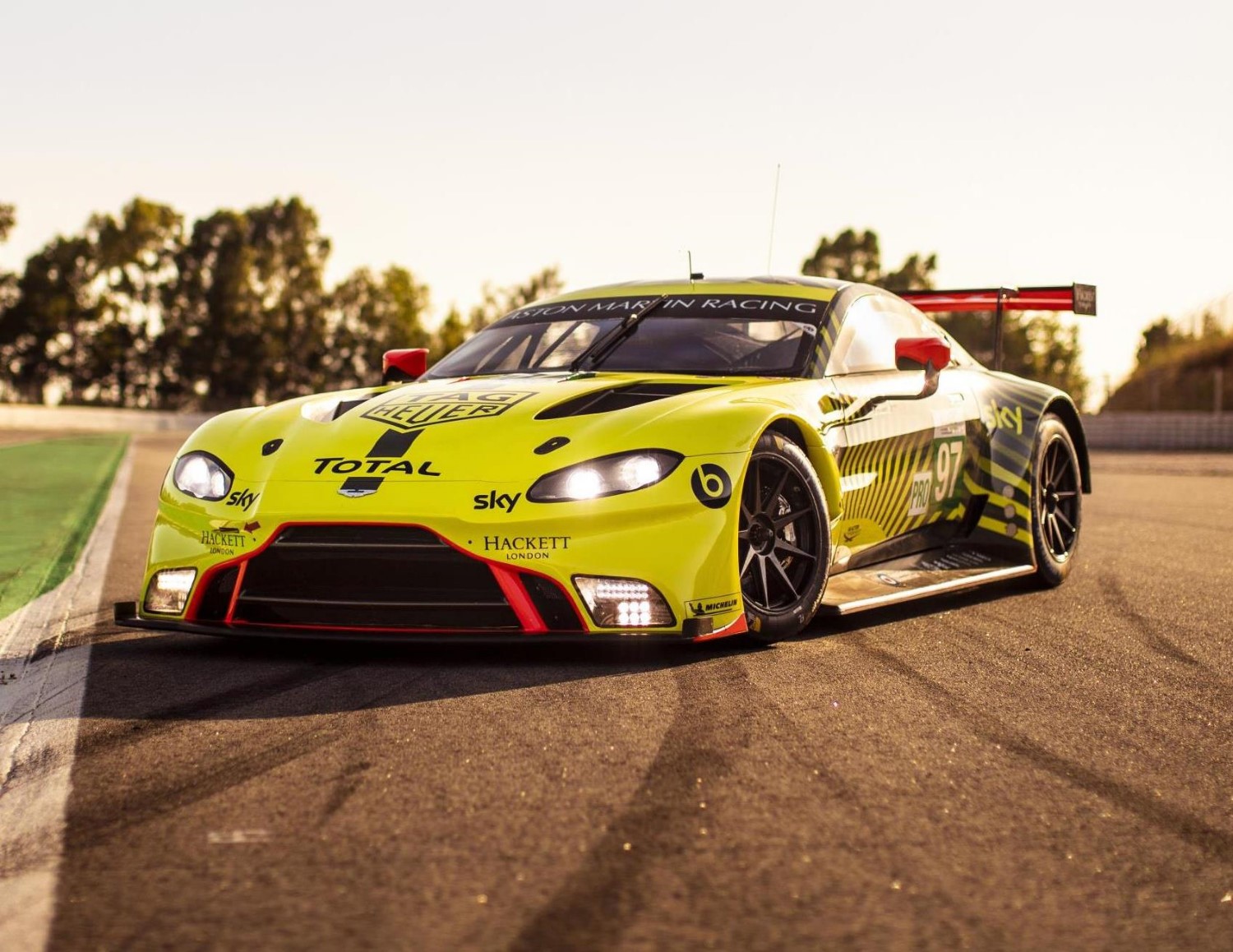 Aston Martin Racing is aiming high as it returns to the FIA World Endurance Championship at Silverstone (GB), the competitive home of the luxury sportscar brand, on 31 August, with an optimized version of its Vantage GTE, a strengthened driver line-up and an eye-catching new livery.

Coming off the back of an excellent debut season for the Vantage GTE, which established itself as a front-runner in a fiercely-contested GTE Pro class with victories in Shanghai and Spa-Francorchamps and a pole position at the 24 Hours of Le Mans, Aston Martin Racing is now focused on regaining the FIA WEC GTE Pro and Am titles it last won in 2016 and 2017 respectively. Moreover the racing car, based on the critically-acclaimed Aston Martin Vantage road car, will make its class debut in GTE Am with a bold new driver roster of Paul Dalla Lana (CDN), Darren Turner (GB), and Ross Gunn (GB).

"I'm really looking forward to joining Paul and Ross in the #98 car and challenging for the 2019/20 GTE Am championship," said three-time Le Mans class winner Turner. "It’s going to be very hard work and I think it is going to be the most competitive season in the category, with some very quick cars and some very strong line-ups. Paul is an extremely talented driver with a great deal of experience in the WEC and as a package we are very strong."

[adinserter name="GOOGLE AD"]Gunn added: “It’s an honor to be joining the works Aston Martin Racing team for the start of the FIA WEC season. I’m very excited to begin this new chapter of my career at the pinnacle of GT racing and I will be pushing for a solid result."

And while the GTE Pro class field has reduced in number for 'Season 8', the strength in depth is as formidable as ever as Aston Martin's old rivals Ferrari and Porsche also return. With that in mind, Aston Martin Racing's exceptional GTE Pro driver line-up remains unchanged for this season, with Nicki Thiim (DEN) and Marco Sorensen (DEN) returning to their regular #95 'Dane Train', while Alex Lynn (GB) and Maxime Martin (BEL) once again occupy the #97 Vantage GTE.

"We are coming in to Silverstone far better prepared and with a better package than last year," said Martin. "It’s going to be a really tough fight with our rivals as they are really competitive, and as a team we will have to put everything together to be able to win and be at the front consistently. The target for everybody is to try and win the championship this year with the Vantage GTE."

Thiim added: "The car is only one season old, and because the season was so long, sometimes people forget that it has only done eight races! We are really proud of what it has achieved already. Now we want to attack the championship and I really want to bring it back to the 'Dane Train' along with Marco and the rest of the team."

As well as the new color scheme, the team has used the off-season break to use the knowledge gained in the eight-race 'Super Season' to further improve and enhance the Vantage GTE, which will also benefit from a new suite of tyres from technical partner Michelin specifically designed around the car.

There are changes to the WEC season format too, with the Silverstone opener and the Shanghai round (10 November) shortened to 4 Hours, while Bahrain returns to the calendar on 14 December with a 8-Hour race and Brazil on 1 February with a 6-Hour event at Interlagos. The season will conclude with the 2020 24 Hours of Le Mans on 13-14 June.

John Gaw, Aston Martin Racing Managing Director summed up: "We are fully ready for the new FIA WEC season and we can look ahead to it with a measure of confidence given our form at the end of last season, where we won two of the last three races and were on pole for the 24 Hours of Le Mans. We're relishing the opportunity to fight against our old rivals Porsche and Ferrari, for together the three brands are the longest-serving teams in the championship. Our driver line-up is very strong and all the GTE Pro drivers are capable of delivering race-winning performances, and they will need to be if we are to deliver on our targets. We have changed the GTE Am line-up after a long period of stability and we expect this to produce results. This is a great opportunity for Ross to prove his ability at world level, while I think we are all fully aware of what Darren is capable of, and this gives him a chance to fight for a world championship and capture a fourth Le Mans victory."

David King, President of Aston Martin Racing said: "After 18 months of sustained development and improvement, which culminated in the Vantage GTE being a double-race winner and a pace-setter in qualifying at Le Mans, we are now ready to challenge for world championship titles again at the highest level of sportscar racing. Vantage GTE has already proved itself to be an exceptional car, in keeping with the traditions and standards of its predecessors. As the current standard-bearer for Aston Martin Racing, much rests on this car, this exceptional team and its outstanding group of drivers' ability to get the maximum performance from it and deliver on all the promise we've shown so far."

The 4 Hours of Silverstone begins at 1200 BST on 1 September.

Nicki Thiim (DEN): “It’s been a short break and now we are straight into the new season and I can’t wait! It’s been a long season, which people forget – more like than one and a half years – but the car has only done one season and I think we should be really proud of what we have achieved already. We had two victories in the first season and we have learned a lot. Porsche is bringing a new car this year and Ferrari has not been sleeping, but I am pretty sure the gains we can make in the new season will make us real contenders in the championship. I'm really looking forward to attacking the championship again with Marco and I really want to bring it back for Aston Martin and the 'Dane Train'. Now let’s get on with Silverstone. It’s going to be a big one and hopefully we can be really competitive because it would be great to win on our home circuit!"

Marco Sorensen (DEN): "I’m looking forward to it just as much as any other race in WEC. We are going to go all in because we want that team and drivers' championship more than anything! I think from the #95 crew at least it’s going to be all guns blazing to take as many points and as many wins as we possibly can and we are both really determined to do that. We have prepared well and I know that we are more than ready to carry the fight for Aston Martin."

Alex Lynn (GB): "Racing at your home circuit is always a very special feeling and to be starting my second season with Aston Martin Racing makes it all that little bit more important to me. That being said, from our side, there is now no room for sentimentality. We should have all the tools at our disposal to put ourselves in championship contention and we must ensure that we do everything to get in a position to maximise this opportunity."

Maxime Martin (BEL): “I’m definitely looking forward to the new season. The Super Season was quite long with some up and some downs, but we worked hard as a team and we improved a lot through the campaign. We are coming in to Silverstone far better prepared and with a better package than last year. It’s going to be a really tough fight with Ferrari and Porsche, they are really competitive, and as a team we will have to put everything together to be able to win and to try and be at the front. The target for everybody is to win the championship this year with the Vantage GTE. Silverstone is the first race of the season, but it is also the home race of the brand and the team. It’s very exciting, and it’s also a new format. Four hours only so it is changing a little bit to last year, but I think we have a good package and we can look forward to some real highs."

Paul Dalla Lana (CDN): I’ve been looking across the garage with envy for the past 18 months at the new Aston Martin Vantage GTE and now I finally get to race it myself in the GTE Am class. We are coming into the new season with a fresh look and a new driver line-up determined not only to regain the championship title we won in 2017 with the #98, but also to try and finally take that class win in the 24 Hours of Le Mans. I would like to pay tribute to my old team-mates Pedro Lamy and Mathias Lauda, who have been brilliant through the years. They have helped us win so much as a team and the 2017 title is the highlight of my career. But looking to the future, Darren is the most decorated GT driver in the team and has the pace and experience to guide us forward, while Ross is super-fast and very talented. I’m very excited about our new line-up and what we can achieve together."

Darren Turner (GB): "I'm looking forward to joining Paul and Ross in the #98 car and challenging for the 2019/20 GTE Am championship. It’s going to be very hard work and I think it is going to be the most competitive season in the category, with some very quick cars and some very strong line-ups. Paul is an extremely talented driver with a great deal of experience in WEC. I think as a package we are very strong, the Aston Martin Vantage GTE has been developing well in the hands of the Pro guys with two wins and a pole position at Le Mans. We are looking competitive with the car package and we just need to hit the ground running when we get to Silverstone and make the very best of this opportunity."

Ross Gunn (GB): “It’s a great honor to be joining the works Aston Martin Racing team for the start of the FIA World Endurance Championship season. I’m very excited to begin this new chapter of my career at the pinnacle of GT racing and I will be pushing for a solid result. I was very comfortable in the car at Barcelona during the Prologue and I feel like we can, along with Darren and Paul, be in the mix in the GTE Am Championship and fight for a podium at Silverstone."