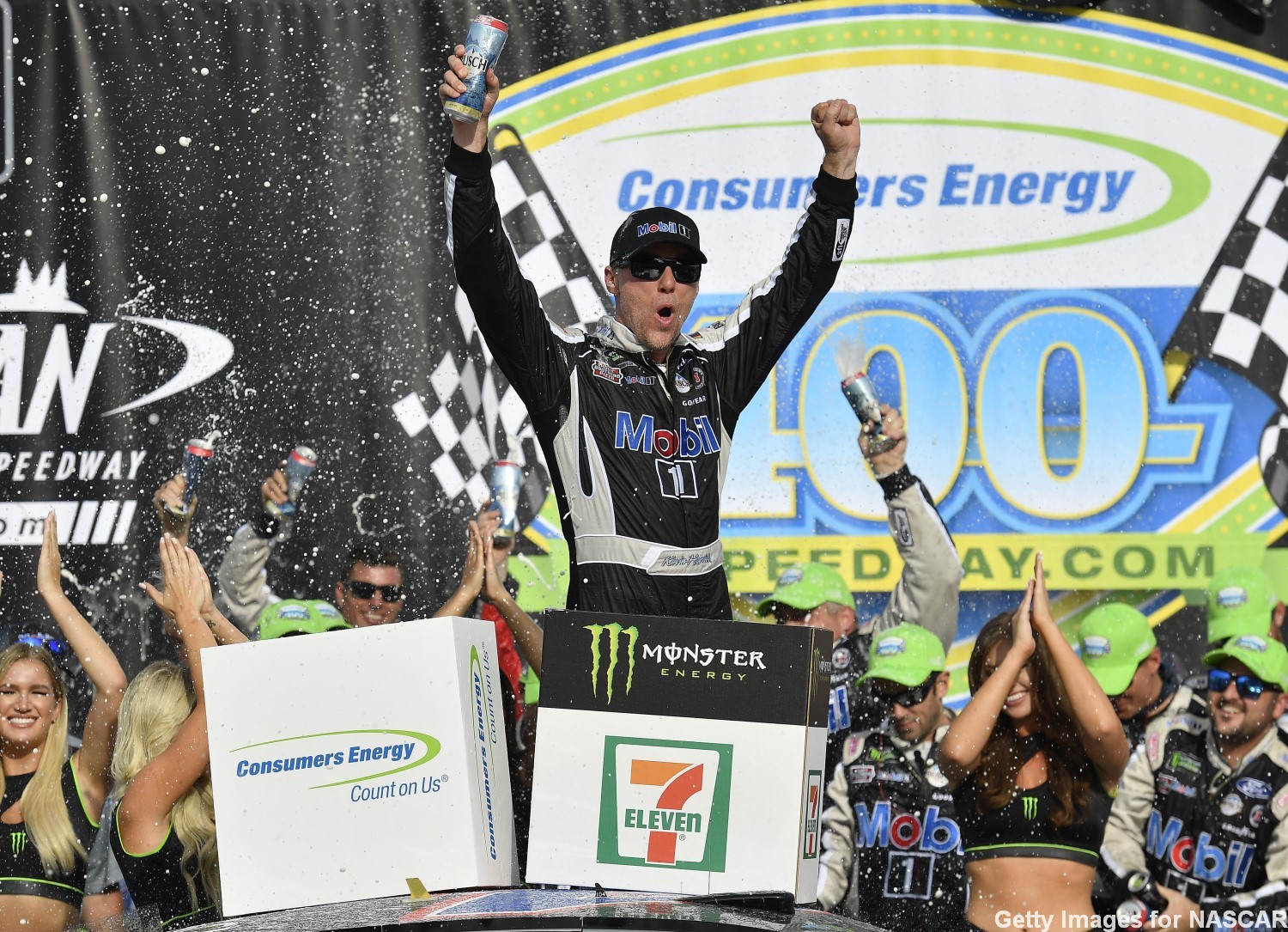 Recovering from a punctured right front tire that cost him track position early in the race, Kevin Harvick passed Joey Logano on Lap 183 of 200 and cruised to a 1.595-second victory in Sunday's Consumers Energy 400 at Michigan International Speedway.

During a closing 48-lap green-flag run that began with a restart on Lap 153, Harvick charged from seventh to first, recording his second Monster Energy NASCAR Cup Series victory of the season, his third at the 2.0-mile track and the 47th of his career.

"It was a day of a little bit of adversity that we were able to overcome," Harvick said. "We had a really fast car all weekend. Our car handled really well today, and with the multiple lanes (thanks in part to the application of traction compound in the high grooves), we were able to run all three lanes pretty well and make our way through traffic.

"They (the team) put a really fast race car on the track, and we were able to capitalize on it, so that's always fun."

[adinserter name="GOOGLE AD"]When Harvick crossed the finish line, leading his 22nd lap of the afternoon, Denny Hamlin was running second after Logano pitted for a splash of fuel on Lap 197. Kyle Larson ran third, followed by Martin Truex Jr. and Daniel Suarez, who re-entered the Playoff picture when two drivers on the bubble ahead of him — Jimmie Johnson and Clint Bowyer — had disastrous days in the Irish Hills.

Thirty-one laps into the race, Harvick steered his No. 4 Stewart-Haas Racing Ford onto pit road with a flat right front tire. But with the first 60-lap stage running green from start to finish, Harvick was able to drive up to sixth by the end of the stage.

Martin Truex Jr. won Stage 1 after starting from the rear because of two pre-race inspection failures, but his No. 19 Toyota wasn't as strong in traffic late in the race than it had been early on. Kyle Busch won Stage 2, but his car, like Truex's, wasn't as effective in traffic after pit stops at the end of the stage scrambled the running order.

Likewise, Hamlin's car was best in the heat of the day on a hot, slick track, but the speed in Harvick's car prevailed as the asphalt cooled down.

"Well, it seemed like we generally had the best-handling car when it was really hot and slick, but as the day went on and the track cooled off, the guys that had built more speed into their car, it kind of handicapped it for them. So, we were able to hang on to those Fords there at the end, and then just got — the 4 (Harvick) was trying to save fuel I'm guessing there, the 2 (pole winner Brad Keselowski) and the 22 (Logano) peeled off.

"Nothing I could really do, just didn't have enough speed. The 4 was about a half second faster than us in qualifying, and when we were holding it wide open there at the end, just couldn't overcome it."

Hendrick teammate Jimmie Johnson wasn't as fortunate. On Lap 15, his No. 48 Chevrolet slapped the outside wall, severely damaging the right side of the car. Johnson finished 34th, eight laps down.

Bowyer's misfortune came on Lap 137, after contact with the No. 21 Wood Brothers Racing Ford of Paul Menard. Bowyer's car slammed into the Turn 3 wall, and efforts to repair the car proved futile. Bowyer retired from the race in 37th place.

Johnson dropped two places to 18th in the series standings, 12 points behind Bowyer and 12th-place finisher Ryan Newman, tied for the last Playoff-eligible position. Suarez moved past Johnson to 17th in the standings and trails Newman and Bowyer by four points with three races left before the cutoff at Indianapolis Motor Speedway.