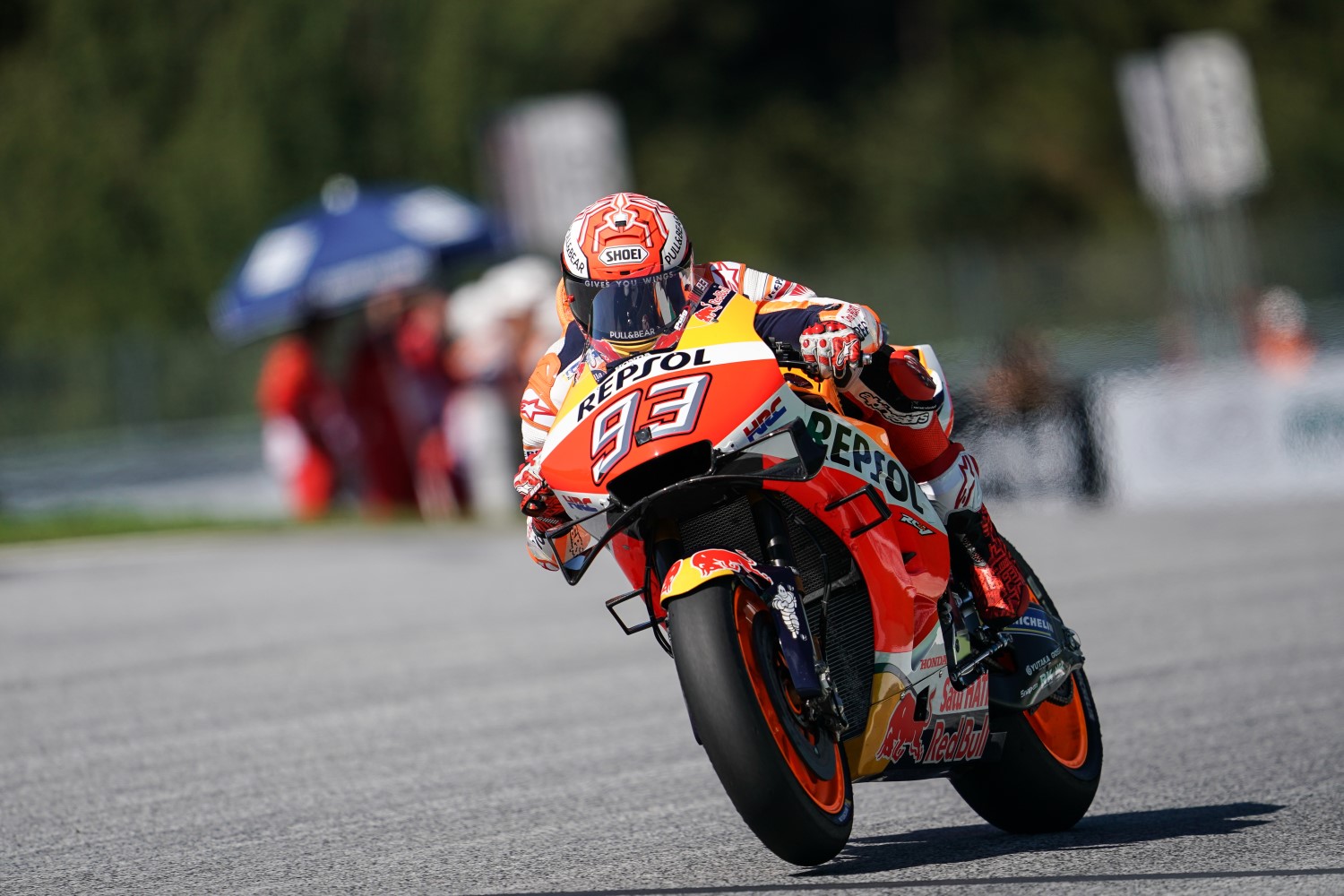 Marc Marquez has won the pole for the Austrian GP at the Red Bull Ring and in doing so has broken the all-time MotoGP pole position record with his 59th pole, surpassing Mick Doohan’s record which he equaled last race out at Brno.

How good is Marquez? Well the sister Repsol Honda bike ridden by Stefan Bradl was dead last, after the German rider suffered a technical issue midway through Q1, at least that was the excuse.

Bradl is filling in for the injured Jorge Lorenzo at the factory Honda squad, while Joan Mir is absent for Suzuki after suffering a heavy fall during the Brno test on Monday.

[adinserter name="GOOGLE AD"]The pace was high from the off on Saturday at the Red Bull Ring as MotoGP riders fought for a place in the top ten during Free Practice 3’s ideal weather conditions. Predicted rain stayed well away and the MotoGP World Championship grid enjoyed uninterrupted running all day on Saturday, able to push lap times further.

Marc Marquez continued his assault on the time sheets immediately on Saturday, dropping into the low 1’23s within just a handful of laps in FP3. His metronomic pace continued throughout and into Free Practice 4 where he ultimately finished third but with formidable consistency.

Again in the low 1’23s, Marquez set the bar throughout Q2 as he targeted a 1’22s around the 4.3km long Austrian circuit. A mistake in the final sector meant the reigning MotoGP World Champion was unable to set a 1’22, but his 1’23.027 did achieve a new all time lap record at the Red Bull Ring. As in Brno, Marquez had a significant advantage over second place – 0.434s faster than Quartararo.

With his seventh pole of the 2019 season, Marquez establishes a new record for premier class poles as he took his 59th since joining the MotoGP class in 2013 and overtakes fellow Honda rider Mick Doohan as the most prolific pole setter in the premier class.

The reigning MotoGP world champion won the pole by a huge 0.434s over nearest rival Fabio Quartararo on the Petronas Yamaha

Quartararo took 2nd with his final lap in qualifying to push Andrea Dovizioso into third place on the factory Ducati, while the MotoGP rookie forced Maverick Vinales to the second row for Monster Yamaha.

Francesco Bagnaia took fifth place for Pramac Ducati after progressing through the first qualifying session along with Cal Crutchlow.

With speculation mounting on his place at Pramac Ducati following Jorge Lorenzo rumors, Jack Miller could only manage eighth place with Crutchlow rounding out the third row in ninth place.

“It was a really good lap but I was looking for the 1’22! But I did a mistake in the last sector and I went too wide in Turn 10. Apart from that we did a great job and during FP4 we had a great rhythm, which is the most important thing. Today was a great day, everything and everyone in the team was working so well. We just need to understand the best tyre for tomorrow and let’s do it! We will try to fight until the end and see what happens."